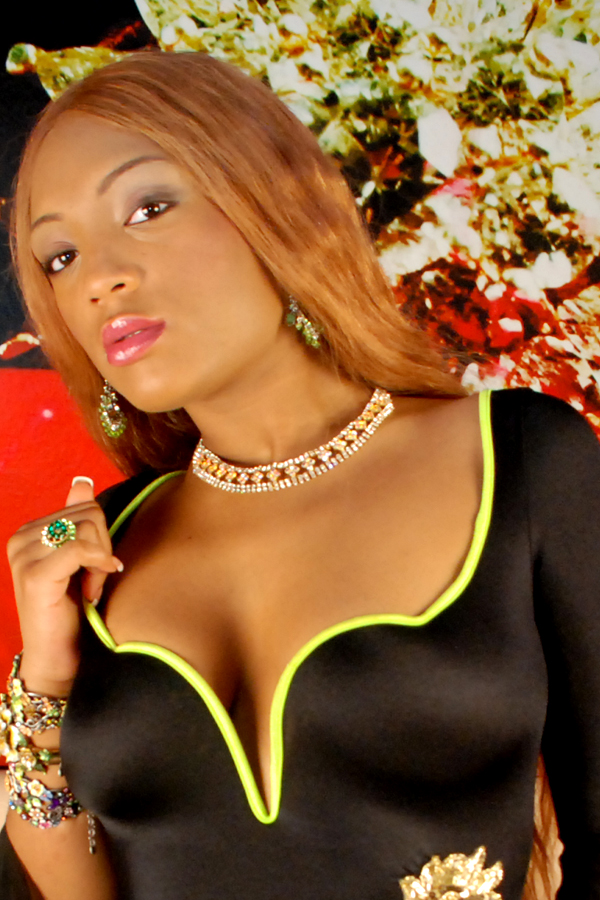 Barbee has not received any gifts yet

Barbee: the name of a star, a star that is shining brighter day by day. Reggae music has another gem in its collection. Beautiful, talented, charismatic and the ability to poses thousands with a performance that can only be Barbee. * Early life and career
Faith J Eselebor aka Barbee (Born in New York City) is an American recording artist, song writer, and fashion model. With a Nigerian father and a Jamaican mother Barbee began singing at the age of five, and by age 11 she was a leader of her traveling choir "Perfect Praise". At age 16 Barbee signed to DefJam Records as a member of a girl group called "Best Kept Secret". The group opened for acts such as rappers Jadakiss, Cameron and others. However, the group somehow broke up, things did not work out with the record label and Barbee became discouraged. Choosing to persevere, it was obvious it was time to go solo and she did that in a big way by recording her first single “Missing you” featuring the culturally riveting VP recording artist Junior Kelly. The single received tremendous airplay throughout the Caribbean the northeast United States (South Florida), Canada, and West Africa (Nigeria). It was number 3 on the charts in Jamaica and became a street anthem.

* Recordings
Due to years traveling between her parents' native countries, Barbee soon developed a natural love for Jamaican music. There was no doubt Barbee would shine from the first hit single “Missing you” (2007). The same year this young artist also worked with the king of the dancehall "Beenie Man", being featured on the Revenge Riddim and in the video of his hit single "Give It Up" earning her first number on the charts. Due to the success of the single Barbee had been introduced to an international audience. Later that year she recorded "Paddy cake" (featuring Beenie Man), "Diva in My Sneakers" and "Light Some Candles Tonight". In 2008 Barbee released the hit single "Love You Anyway" which graced all major reggae charts globally, the video has been receiving regular rotation on Hype TV, can been seen on Youtube and the is available on iTunes (audio download). For 2009 The recording artist recently came out of the studio with a new single produced by Dean Fraser, a cover version of Karen white song “Can I stay with you”. Now you can check out Barbee's hot new single "Feels So Good" (also produced by Dean Fraser) which will be featured as a soundtrack in an upcoming movie "House Arrest".

* Shows and Appearances
Gallons of ink have flowed across news paper clips, magazines and flyers, from her personal life, appearances, CD promotion, promoting a product or donating to the poor. On her birthday Barbee did just that with a team of family and friends, food was distributed to several communities in Kingston downtown area the same was done at Christmas time. Barbee comes alive on big stage events like Rebel Salute and Sunfest she moves among reggae music finest, and performed for politicians and delegates at the United Nations a tribute to Nelson Mandela. As a rising star Barbee is the winner of two EME awards (Excellence in Music and Entertainment), for Best New (Female) Artiste of the Year and Best Collaboration of the Year (Beenie Man combination single Give It Up).

* Current activities
- Soon to be announced ....... Barbee makes a small appearance in an upcoming movie "House Arrest" which features The Game and Stacey Dash. The film, described as a “dramedy” by director Billy Washington, centers around a “high maintenance girl who meets a quick money scheming man.” - June 27th 2009 At the 20th Annual Susquehanna Community Festival in Philadelphia, with a heart-stealing performance. Barbee was honored and excited to take her place alongside Hall of Famer Jazz/R&B icon Bobby Womack, whose music is both legacy and as current as love, the legendary Cuba Gooding Snr. & the Main Ingredients, songbird Carol Riddick, hip hop legend Biz Markie, rapper Tuffest and Sledge. - June 21st 2009 The ‘Love You Anyway’ sexy singer then hit The Brooklyn Music Festival Father’s Day tribute which pulled a huge crowd, all of which enjoyed every moment of the dancehall doll along with Beenie Man, Capleton, Mavado, Bounty Killer, Elephant Man, Natural Black, Serani, Tarrus Riley, Doug E. Fresh and Big Daddy Kane. Lady G and Spice also represented well for the ladies. - June 12th 2009 Barbee and the Dance Expression group took California by storm, where she left her mark as one of the stars of reggae, alongside Junior Reid, Andrew & Wadda Blood, Shinehead, Lukie D and others.

Barbee is becoming a household name in reggae music, versatile and creative she is fulfilling the request of her fans all over the world...

From the Office of Cloud9TT Studios and Just Better

What it is, What it do, The Name is Splifferman aka Joe Black,... Just Better getting to kno the who's of who and the whats of what!

Artiste if you feel the vibe lets do a callabo let me know...email me at justbetterpublishing@gmail.com

Lloyd-D-Stiff said…
I like ur style!That video was so sexy u deserve to win that award. It wasnt too much, yet it had enough to capture ur audience full attention. Well done

DJ Young Lion said…
give thanks happy luv day an please vote for me at www.codagroovesent.ning.com/profile/2010starscontest

miss knockout said…
HEY BARBEE !!
WASSUP IT'S MISS KNOCKOUT COMIN THRU YA NEW FAVORITE RAPCHIC!!! ADD ME UP AND I WANNA SALUTE THE CARIBBEAN COMUNITTY FOR THE LUV IM GETTING FOR MY SONG SO PLEASE GO TO THE FRONT PAGE AND VOTE MY SONG "GET IT GET IT" AS YOUR FAVORITE SONG UNDER THE MUSIC PLAYER CLICK MISS KNOCKOUT IN THE DROP DOWN BOX AND SUBMIT!! THANKS FOR HELPING TO SAVE THE RAPCHIC AND STAY IN TOUCH!!
BLESS UP!!
PEACE
MISS KNOCKOUT
ADD ME UP ON THESE SITES:
HTTP://WWW.MYSPACE.COM/MISSKNOCKOUT *25 M,ILLION PLAYS!
HTTP://WWW.TWITTER.COM/MISS_KNOCKOUT
HTTP://WWW.FACEBOOK.COM/MISSKNOCKOUT

Action1060 said…
LOOKS LIKE MAN!!! Trying too hard to be a sexy woman. Sining couldn't be worst