Cindy Crawford PHOTO cause online debate. What do you think? 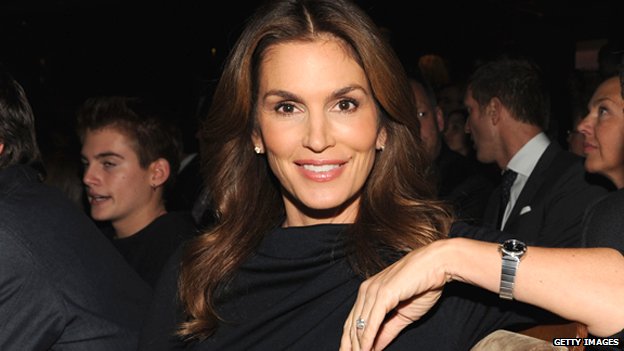 It has been almost three decades since Cindy Crawford posed for her first-ever magazine cover, but her name was trending worldwide as an unretouched photo of the 48-year-old supermodel went viral on social media.
Initial reports indicated the image was part of a series of unretouched pictures to be featured in an upcoming issue of Marie Claire magazine.
The public's reaction to the photo - which features Crawford sporting a black lingerie set, fur coat and a not-quite taut stomach - was overwhelmingly positive.
"Bravo Cindy Crawford. 'Beauty is truth, truth beauty, that is all Ye need to know on earth, and all Ye need to know," tweeted fellow Hollywood star Jamie Lee Curtis.
"Could not love Cindy Crawford more for insisting that Marie Claire publish untouched, REAL photos of her #beautiful" wrote Twitter user @LouboutinJools.
While the story of Crawford demanding that Marie Claire publish the unretouched photo went viral, the magazine quietly amended that narrative in an article of its own. It stated that the image, which was taken from a shoot for a December 2013 cover story for Marie Claire Mexico and Latin America, was a leak.
The new revelation has lead to more soul-searching online, and has left some body image experts conflicted about the release of, and subsequent reaction to, Crawford's "brave," "real-woman" body.
"Now that I know the image was leaked, it kind of changes my response to it," said body image expert and author Leslie Goldman. "When we thought she had intentionally released that photo, it was different. We thought she was putting it out there to say 'I'm not perfect either.'"
That the image was apparently distributed without Crawford's permission puts it in a camp with other, more notorious celebrity leaks - like the infamous 2014 Apple iCloud hacks that targeted Hollywood A-listers including actress Jennifer Lawrence and pop star Rihanna.
"Tearing down unrealistic beauty standards is noble, but it shouldn't come at the cost of a woman's privacy," said Guardian columnist @JessicaValenti.
"How is an objectifying pic of Cindy Crawford's scantily clad, unretouched body released without her permission empowering to women exactly?" said Twitter user @WarrenHolstein.
Despite the media frenzy surrounding the image, Crawford and those close to her have remained silent, save a sole Valentine's Day Instagram from husband Randy Gerber. It showed Crawford lazing poolside - and looking much more the "supermodel" ideal.
The Marie Claire photo may have been circulated under circumstances that were dubious at best, but according to Goldman, that doesn't diminish the value of seeing a legendary supermodel with flaws. "Women everywhere are feeling empowered, relieved and grateful to her," Goldman said. "I just wish it had come about under her control." Comment by E Peters on February 25, 2015 at 5:45pm
She is smoking and yes lots of younger women wished they look this good now

Comment by Valerie Smith on February 21, 2015 at 8:46am
i still think she's gorgeous,at her age,and body,she still out do young chicks.

Comment by Roots aka TJ What De Ras on February 20, 2015 at 4:09pm
Sorry but she needs to retire and let the young bucks or jada pinkett mother show off their body

Comment by sharon sprott on February 20, 2015 at 1:21pm
Cindy Crawford one of the best looking model's of all time she is still has beautiful as ever even at her age

Well there are days when I have a bad hair day and can't touch up my photo so who cares if she has a photo of herself that's not photoshopped or touched up?  She is a pretty woman regardless and we all have flaws, none of us are perfect!