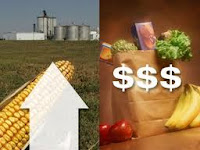 What Does It Mean To You?
People and governments in developing countries such as Asia, Africa, Latin America and the Caribbean should not ignore predictions the world’s food supply experts.   A crisis is looming and it portends the next significant global crisis.
Food and Money
Let’s face it food is one of the basic consumables of the human species.  Air and water are the other two.  In a New York Times article, journalist Elisabeth Rosenthal  reported that according to the IMF the food price index is “the highest in 20 years of existence”


.
Food however, is directly related to economics.  It is not so much the food shortage but high prices for food that will create the crisis.  To add to the madness some rich countries are creating a demand for biofuels and consuming a vast supply of cassava, corn, sugar and palm oil for conversion into biofuels.
How Much We Eat
How long will it take 6.91 billion people ( world’s current population) eating everyday, 3 times a day , to consume what’s on the shelves right now?  This number is expected to significantly increase.  See World Population figures
Best guess is a couple of days.
And that’s because as soon as the shortage is announced the hoarders rich and poor will converge on the groceries like red ants stockpiling food.
The Crisis Is Here Already
It will take a bit longer to actually see the results of the crisis globally.  Soon new reports of the affects of high food prices on poor countries will begin to surface with more frequency.
In fact, it has already showing up globally.  Most people don’t even realize that the overthrow of the Tunisia government in the Middle East was prompted by high food prices.  Or that soaring food prices caused riots or contributed to politacal turmoil in Aleria, Egypt and Bangladesh so far..
The world is still recovering from an economic crisis many countries will be affected by any shortage in the world’s food supply.  Here is what the leaders of the IMF and World Bank had  to say:
"Food prices worldwide have surged 36 percent since a year ago and disproportionately hit developing countries. The rise in prices comes even as 44 million people around the world have been thrust into poverty since June last year.

"We are one shock away from full blown crisis," said World Bank Group President Robert Zoellick at a press briefing in Washington on Saturday.
The region's poor often spend half of their income on food. Having to use more of that income on feeding their families means fewer funds are available for families to save or invest.

"If the Food Price Index rises by just another 10 percent, we estimate that another 10 million people will fall into extreme poverty when people live on less than 1 dollar 25 cents per day," he said. "And a 30 percent increase would add 34 million people to the world's poor, who number 1.2 billion."     Read More here

You Have Been Warned


These predictions are all coming from credible sources and are serious enough that any forward thinking government must prioritize it.  It should not be ignored.  The global trumpet has been sounded it is up to the individual nations to begin to put some sort of contingency plan in place.
What Can You Do?
Let’s face it, if you are reading this, you most likely not in government.  Fact is that even if you are you would be more interested in what you can do to forestall the crisis at an individual and family level.
The most obvious answer is to begin to hoard now.  Stockpile your food for a rainy day.   What is more important is understanding the extent of the problem.  There is only one way to do this…
First educate yourself.  Find out what is really happening in the world with respect to the food shortage.  Don’t take the words you read here as truth.  Do your due diligence.
Don't Stick Your Head In The Sand
Next, you need to come up with a plan after you have looked at your disposable income.  Determine the quantity of food you will need to stockpile for a specific period of time.  This will be based on the size of your family and relatives you wish to include. Don’t guess, your life may depend on it.
Earmark a percentage of your disposable income for food that you can afford.  Make plans within your family for the impending crisis.  As you will discover, it is not if but when the crisis will begin affecting you.  Then, identify the type of foods that are not perishable and are potent enough to sustain you on a daily and monthly basis.


Here is my contribution to the impending food crisis.
Post a comment on here with your email address and get a free copy of "36 Potent Foods to Lose Weight and Live Healthy".   This valueable report will tell you exactly what foods you should concentrate on stockpiling.
Do It While You're Not Hungry

Comment by Bombahdrop on April 25, 2011 at 11:21am
There is no measurments to take in this matter, because it is written already, that this is and will take place. 4 if it can be prevented what drastic measures are people taking for this not to happen ?

Comment by Bea Brielle on April 25, 2011 at 10:55am
This is part of the prophecy that is to be fulfilled. Watch, pray, listen. The second coming of jesus is near.

Comment by PETER MCKENZIE on April 24, 2011 at 2:52pm
Rasta has been saying that from the 70's and people ignore them, now it come to fulfillment.

Comment by fearless sound on April 24, 2011 at 9:37am
if every house would plant a fruit tree i think that would help

the earth is the fullness where everything dwell