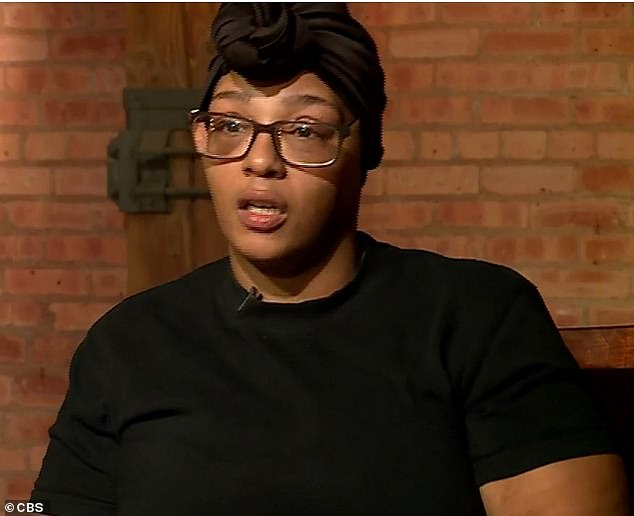 A mother-of-three was shot at least 14 times by her ex-boyfriend in front of their children, who stepped in to keep their dad from killing her.
Nikeya Shumake, 32, of Milwaukee, Wisconsin, was shot more than a dozen times on July 23 after her ex-boyfriend Askia Strong, also 32, chased her down after an alleged argument.
Strong is still on the run and is suspected of hiding out with family in Chicago, Illinois, or Indiana, and is wanted for attempted murder.

The couple had been together for 17 years and share three children - Jermiyah, 12, Askia Jr., five, and Zamiyah, two.

In surveillance footage, Strong can be seen following the mother closely before she falls onto the ground as her legs buckle underneath her.

She can be seen rolling on the ground as he continuously fires at her in the grainy footage.

'He just kept shooting and I fell to the ground, and laid there and let him keep shooting until he was done,' she told CBS 58. 'I would like the whole video to be played so people can understand from my point of view and from my kids’ point of view.' 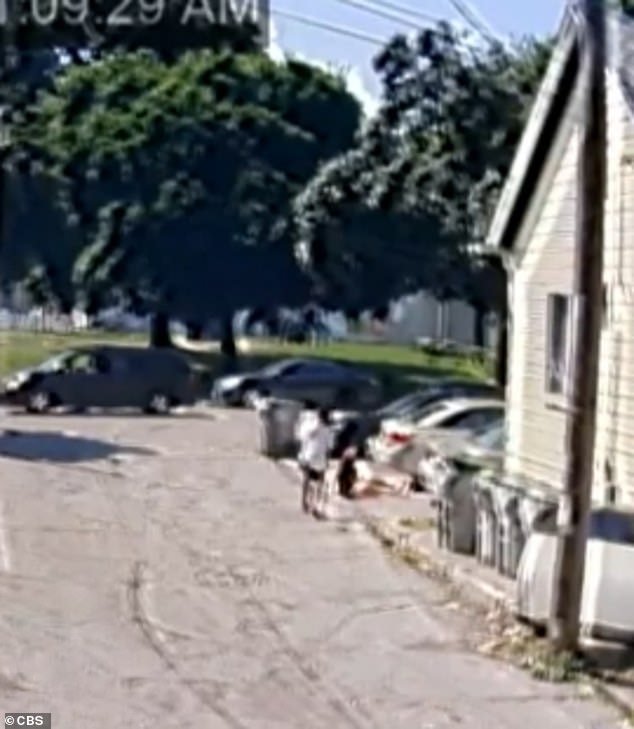 Nikeya Shumake, 32, of Milwaukee, Wisconsin, (on the sidewalk, middle right) was shot more than a dozen times on July 23 after her ex-boyfriend Askia Strong, also 32, (right, in white t-shirt) chased her down after an alleged argument 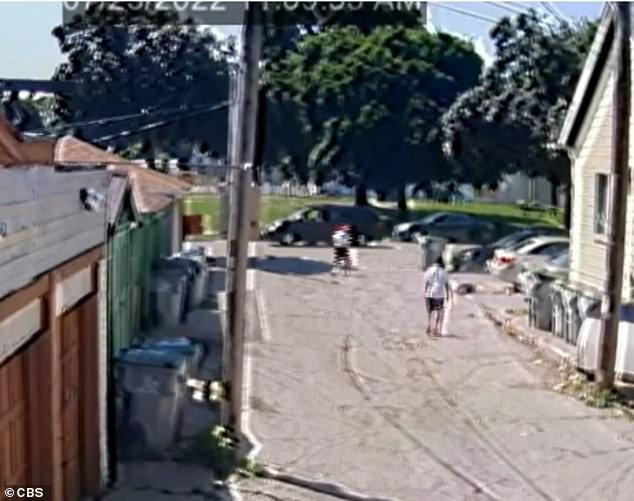 The couple had been together for 17 years and share three children - Jermiyah, 12 (left, in white), Askia Jr., five, and Zamiyah, two. Their children were present during the shooting and tried to intervene so they wouldn't kill their mother

Seconds later, her children can be seen running toward her. One of them appears to throw something at their father, while the others scream and jump around, begging their father to stop.

'My oldest, she screamed out in anger. She just wanted it to stop,' Shumake said through thick emotion.

He appears to run away before coming back and shooting Shumake several more times.

After he made his getaway, the mother seemingly gets up as if she wasn't even shot. After she was able to 'focus' her eyes, she managed to 'get up a little bit.' 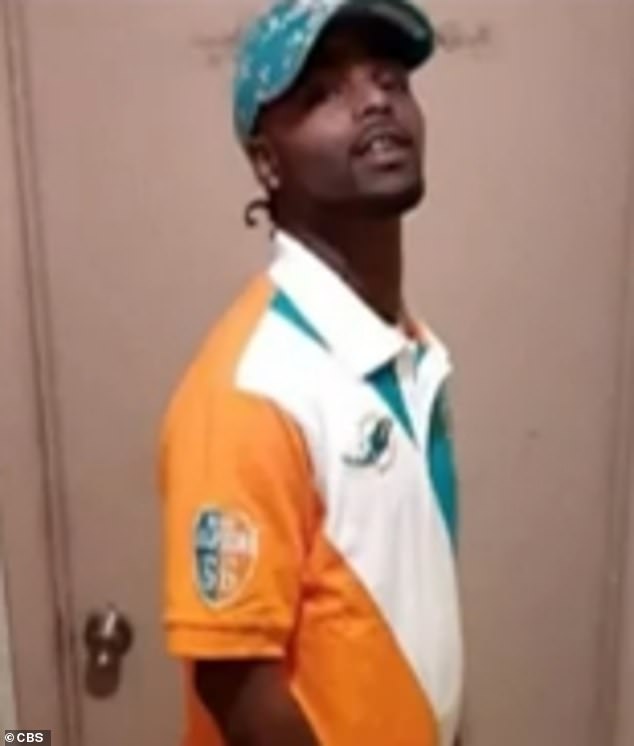 Strong is still on the run and is believed to be holed up in Chicago, Indiana, or Illinois with family. He has been in and out of jail throughout their 17 year relationship

She called herself a 'hero' for her ability to get off the ground and said it was 'victory for me to from that point on.'

Shumake would go over to her neighbor's car and open the door, pushing her laundry out of the way, and asking her to 'please, just take me' to the hospital. The neighbor, Shumake claims, watched the entire gruesome attack happen.

The pair had just broken up a few days prior to the shooting and Shumake said her children watched the criminal - who has been in and out of jail - abuse her for several years.

She admitted that he had 'pulled a gun out before that, but didn't use it.'

'He was just calling me stupid and stuff,' he told CBS 58.

The mother-of-three said she made his life 'easy' and decided only a few days before the shooting that she wanted to focus on herself.

'I made life easy for him, that he couldn't accept that life was about to get hard. I wanted me. I didn't want to always think what he want. If I am doing the right thing or making him happy, I want to think about me and my feelings,' she told CBS 58.

Since the shooting, Strong has reportedly harassed his ex-girlfriend through social media, but she claims she isn't afraid. 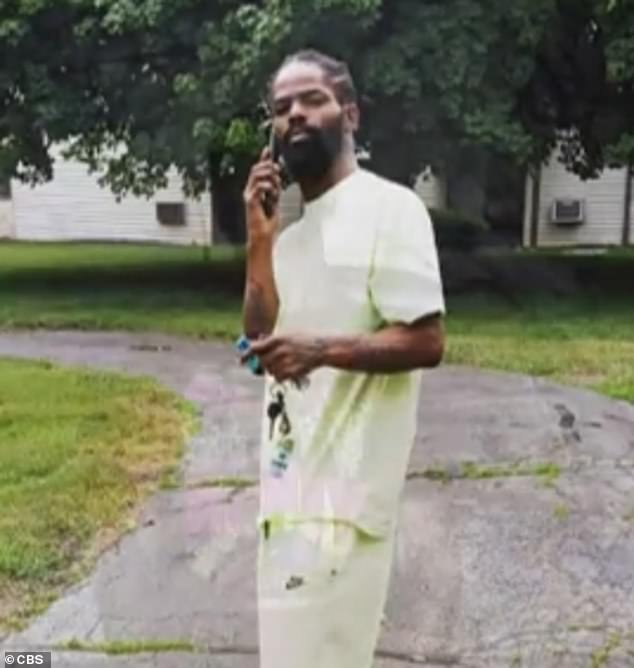 Strong has been in and out of jail throughout their relationship and Shumake claims he was angry because she decided to leave him and not make his life 'easy' anymore. She said: ''I made life easy for him, that he couldn't accept that life was about to get hard'

She is now calling for the public to help 'turn him in.'

Shumake's domestic violence case is just one of the growing number popping up in Wisconsin.

There were 80 homicides cases related to domestic violence last year in the state, according to the End Domestic Abuse Wisconsin. A third of those cases happened in Milwaukee and many involved black women.

He can run but sure can't hide the law will catch up with him soon and I do hope he pull that gun he used on you so the COPS can DONE his ass.Now sister if he was like a bum from the first why make 2 more with that low life punk.STAY STRONG THE LORD GAVE YOU A 2nd CHANCE TO PROVE TO YOU THAT YOU ARE HERE FOR A REASON..BLESSINGS UNTO YOU AND THE CHILDREN.

Damn, they sleep with dogs and gets fleas, not surprised.