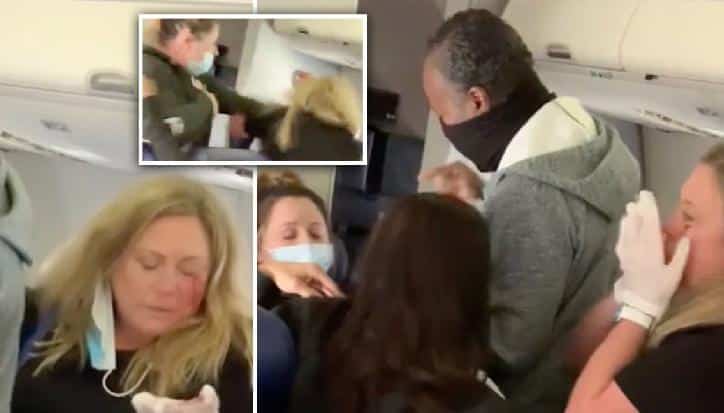 Southwest Airlines says they are holding off on serving alcoholic drinks after a flight attendant was assaulted during one of their flights.

The decision comes after an incident involving a flight attendant and a passenger earlier this week. A clip of the fight shows the female passenger physically assaulting the flight attendant, causing her to sustain injuries to her face and losing two teeth. Southwest Airlines flight attendants’ union president Lyn Montgomery said in a letter to CEO Gary Kelly that there have been over 477 passenger misconduct incidents between April 8 to May 15.

Additionally, American Airlines has also made the decision to stop serving alcoholic beverages in the main cabin but they will continue to serve first and business class during in-flight.

A 28-year-old female by the name of Viviana Kenyonez is now the subject of a charge for battery causing injuries after she was seen on a Southwest flight punching a flight attendant, several times.

The issue came to be when, the passenger took off her seat belt after the plane that was travelling from Sacramento to Sand Diego landed however, it is a well-known fact that what she did is something that is advised against on all flights worldwide.

Even though another passenger interrupted the attack against the flight attendant, the assault sadly left the plane worker with a bloody face as well as two lost teeth.

According to the Federal Aviation Administration, there are over 150 recorded incidents of this nature per year however, for this year alone there has been 2500 recorded attacks against flight attendants where they have been pushed, punched and slapped in the face.

President of TL 556, explained that the situations currently being faced by airplane workers have never before been seen. He conceded that “hostility… unprecedented.”

The violent passenger was escorted off the plane after the altercation and slapped with the battery charge, along with being blocked from taking that particular airline again.

vaughn mitchell stop watching cnn or repeat after others, your old ass need to start reading and research information, now what news were you watching, you mean to tell us he shot and killed only nonwhites, let me guess all the victims were blacks or other?

You dumb f*** lol stop watching cnn, and start researching, he was unhappy with his job due to unfair assignments, he complaints about coworkers in general not one group, go back and read and you will find out there were more white victims among the dead, you dumb empty headed n*****, thats why you niggers are still complaining about everything, you love to sit and wait for others to do for you, go on and read n*****

Comment by vaughn mitchell on June 1, 2021 at 11:16am
The white dude who kill his co workers at the railroad, was fired he was a racist, he made racist comments just like your racist ass use the N, word. He did not shoot his white co workers. He stated to his ex wife that he would shoot his coworkers. He tape his ex girlfriend. Not one of those people deserve to be killed. He stock piled, guns , ammo, and bombs in his house, he was a loner.

and thats why i dont feel sorry for idiots, just like she used hate towards that woman making a living is the same way many dont get it, when that dude shot those 9 people at the railroad last week he had reasons too, he picked his victims, people he worked with, before you start to feel sorry ask your self was he being a victim for a long time, people are eveil and they must pay the price of the end, thats all thats it, i dont care about your little comment, you need to think about will you be next at your work place each time youre being evil to someone else

What kills me about people these days........everyone records, watches and just standby.  Nobody does anything to help a victim.  Sad.

Wow !! if it was another person other than white.. the episode, would had end up different for real::::: this is what you call white privilege!! however the longest rope has an end!! trust me they are aware of it.. it's coming...

She was allowed to walk off No Harm No Handcuffs and they wonder how they respond to certain people isn’t considered Privileged at its Best or Worse.