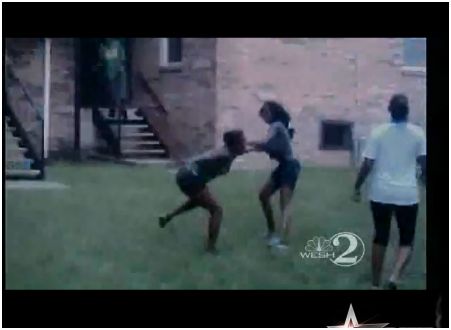 For the average person involved in a street brawl, the part in which you suffer a gunshot wound would usually represent the end of you participating in that brawl.

However, Brittany Thomas is not your average person.

Brittany stepped outside from her apartment in Ocala,Florida earlier this month when another woman ,whom Brittany says she didn't even know, accused her of talking bad about her.

the war of words turned into a fight with fists, and a crowd grew around the brawl, with pushing and some trying to separate the women. It was then that Thomas said two gunshots were heard.

Thomas said a bullet hit her in the chest, temporarily stopping the fight.

People screamed and scattered but Brittany remained focus on the fight and got right back into throwing fists and pulling hair before realizing that she was even hit.

"I rubbed my back; that's when I saw a little streak of blood on my hand. I looked down and I had a hole in my chest," said Thomas.

A witness told police that a man in his 20s fired a gun at the ground as the group was fighting and then took off running.

I'm so glad the girl is okay.   I think this whole thing with this strange woman coming up to Britney accusing her of something is just a setup to have an excuse for someone the strange woman might have known to use a gun.

I just witnessed a brawl between several men and a couple of women right on my friend's front yard last Saturday night.   It was a miracle no one pulled a gun or knife!   Young men just love to shoot guns.  What are you going to do, unfortunately it's part of life.

That's some bull s*** !dont play around with people lifes like that !

Comment by Ronsay on August 25, 2011 at 6:12pm
it's sad because you don't hear any music from any of these folks besides the greatest KRS-1 I was told that he and Raekwon arecoming out with an album which won't get good marketing to keep ur ears open

Comment by Ronsay on August 25, 2011 at 6:06pm
@LSD I have to agree LOOOOL! the s*** is sad, i'm just wondering where's the whiteman that told the brotha to fire his gun into the crowd of a female fight, as you can see black people we are very powerful people the only problem is that we use our power in all the wrong ways....hope they catch his domb ass!

I'm hard right now; er.. Biggins? May I please have some pumpum now?