The 29-year-old followed up his picture with confirmation that the tongue, eyes, and beak were ‘all present with extra seasoning’.

‘I had drove there, took it all the way home, got home, started eating the first wing,’ said Cook.

‘As I was putting the bone back in the box, I saw the chicken head and immediately spit my food out.’

The restaurant chain followed up the incident with a statement: ‘Buffalo Wild Wings takes food preparation, service and quality extremely seriously and we are looking into this situation.

‘We’ve reached out to Jared Cook and our suppliers for more information.’

Thankfully for Cook, he received a refund after returning to the restaurant – but he also got a bit of a dodgy excuse as well.

‘They were just, like: ‘We’re sorry. Typically, this doesn’t happen. That just means your food was fresh,” he said.

‘OK, that doesn’t make it any better.’ On Friday, Cook tweeted that earlier this week he found a chicken head in his meal at the sports bar chain.

"How Sway? How?" the NFL player tweeted, posting a disturbing photo of the chicken's head. According to another tweet from Cook, the tongue, eyes, and beak of the bird were all present... with extra seasoning.

Cook's tweet had been retweeted more than 4,000 times by Friday afternoon, garnering dozens of disgusted responses on social media. 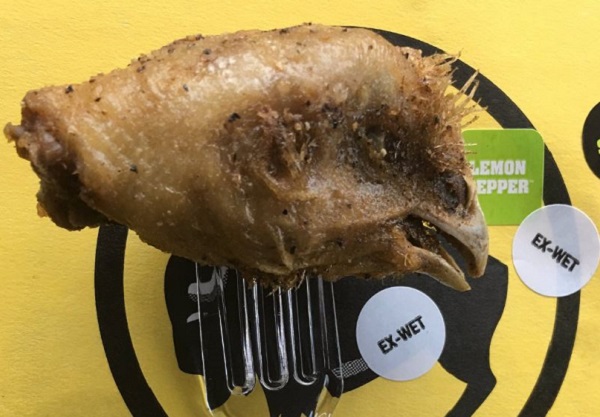 Buffalo Wild Wings also responded to Cook, saying that the chain was looking into the issue.

"Buffalo Wild Wings takes food preparation, service and quality extremely seriously and we are looking into this situation," the company said in a statement to Business Insider.

Unfortunately, finding unexpected animal parts in food at restaurant chains is not uncommon. Occasionally, organs are mistakenly not removed during the food preparation process.

However, usually in these instances, the person who finds a stray animal part isn't an NFL player with more than 32,000 Twitter followers

A  New Jersey woman was out at a Popeyes restaurant in Harlem when she found what she claims is a rat head in her chicken meal.

“This is clearly a rat and they have the nerve to have a 5 rating by the Department of Health,” wrote Rosemary Thomas on Facebook, describing her experience on Sunday eating out with her daughter, sister and niece.

Thomas also wrote on Facebook that she had to take her daughter to an urgent care clinic after the experience because her daughter felt ill.

“Yesterday, she ate nothing all day,” Thomas wrote. “All she said she could think of was the rat head after she consumed the crispy part.”

Popeyes spokeswoman Renee Kopkowski said that Popeyes was aware of the Facebook post and that the owner of the franchise had reached out to Thomas.

“He’s meeting with [Thomas] as soon as she is able,” Kopkowski told HuffPost. “In the meantime, he ordered a health department inspection and they found nothing out of the ordinary. We’ve checked with suppliers and they feel it is most likely chicken organ meat. We will work with the guest to recover the product and test it to confirm that.”

Comment by Wayne Bacchus on September 25, 2016 at 6:53am
Thats why I don't eat that .You never know what you are really eaten

James Donovan it depends on how long it was in the oil for, but the body will always burn first

Ab Gai thanks and of course you know you will nail your plan, as far as land believe me its big business get them my uncle is in that line of business thats how i get involve home auction is big those are the things that build wealth you could not imagine how cheap you can get a house for cash land auction, if you want i can send you one of the link of the auction we have been involve for a while and that one is low fees thats what keep me from working a 9-5 and the money circulate you can expend to other businesses like Magic

That is total BULL S***. If that rat / mouse head was fried along with the chicken, it's face (eyes and nose) would not be readily identifiable. She's just another low-life trying to score a quick, fast one. Worthless, nasty-fat-nasty, cholesterol around the heart, big head, Ebonics-Majoring, lying piece of s***. Somebody please identify her so we can blow her stupid ass up.

I am glad to hear about the progress on your youtube channel and wish you much success.  We need to hear from folks like you instead another blog page about the kardashians whoring.  I am also working on a social venture, but we will be in different lanes that way we'll cover more ground, earn more money and contribute to society instead of just complaining 24/7.  I always telling these that the internet is the equalizer in 2016 and beyond.

Thanks for pointing that out in the picture. I don't she realizes how serious this situation is and most likely the resolution that the "restaurant" will offer for the inconvenience is a free meal or 2 free meals....and she will take the free meals...then we will be right back to square 1.

I try to stay in "place", unfortunately my dad didnt teach me to say nothing, so it's hard watching people basically kill themselves eating SALT FROM THE BOTTLE.  How much more crazy does it need to get before we start acknowledging that there is a problem and there needs to be some serious changes within the community before we can even think about tackling issues affecting us from outside.  i shouldn't be the only black female in the gym or going swimming; I would like other black females to do the same but to get them to do a water activity is dam near impossible.  I am tired of the excuses.  I told on of my guy friends that I was cooking Sunday lunch and that dam near blew his mind.  He said it is so rare to hear someone, especially a black female, talk about cooking much less hear the term "Sunday Lunch".

I drive to south eastern WA to visit friends sometimes and along the way I see all the humongous farms that basically feed the country.  LAst week I saw a sign for a land auction, so I ask a couple friends we should partner up and buy some farm land and at least just lease the land out to someone who wants to farm if we don't figure out how to do it successfully.  I know there aren't any black farmers in the area and all I see is Trump signs.  The response I got from the negros is that it sounds like alot of work. WTF!  But  I am not surprised, which is why they will continue to give us whatever they want, which is Mcdonalds and popeyes on every corner.....instead of fresh food.

Ab Gai look at that woman in the picture she is pausing and relaxing for the camera and it suppose to be a serious topic yet niggas wonder why people take them as a joke, every cursed of a black woman is passed on from generation, what you saw at that woman's house is happening just about every where but yes thats not you business to say anything because she is not your friend, if thats a friend you can show concern for her and the kids, if someone is my friend i speak on the matter if they mad i tell them to go over to the people who ill tell them what they want to hear because i will tell them what they need to hear, but you have to know your friends if i know people who hate the truth i have two rules i tell them do not tell me about their businesses or tell me if they need my views and opinions do they want the truth or for me to sound like the rest. so many  black women these days have no values because they were raise with no values how can a woman teach a young girl self respect when she has multiple kids for different men, bringing different men around her kids that is exactly what that young girls will do which is why you see them getting pregnant at 15 years old, those women no nothing to teach those girls so they tell them find a man with money to take care of them, but never taught them self worth and independency so they just look for the lames which is they are sleeping with different men, the few good black women we have left are in the mix getting played and they are running out of options when it comes to men so they are getting desperate, its a sad situation black people ate the nuclear weapon to their selves

Comment by Ab Gai on September 22, 2016 at 12:25pm
We need to start changing the way we eat food. Instead of running to McDonald's (a 2yr old should not know what a McDonald's is) we need to cook our own fresh food. There is no excuse, except for those neighborhoods that are considered food deserts, but now you have companies that will ship the fresh food in a box for you. Or they can follow your lead and phone a friend. There is google, YouTube, cable tv networks. No excuse not to know.