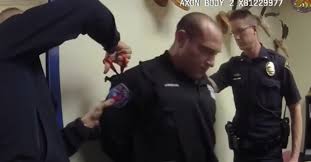 A New Mexico police officer was arrested and charged with domestic abuse and it was all caught on tape.

The disgraced officer's colleagues at the Albuquerque Police Department, wanted to make sure that the whole world knows that they don't allow women beaters in their ranks, so they videotaped his arrest.

Jeffrey Wharton was arrested last week, just before his shift started. Apparently, he had an active open warrant from the neighboring Rio Rancho Police Department, for domestic violence.

According to the criminal complaint, Wharton beat his wife so badly, she had several gashes on her head and face. Police say her injuries were so severe, she had to be taken to the hospital where she was diagnosed with a brain bleed. Some of the domestic incident was even captured on the couples "RING" doorbell system.

When Officer Wharton arrived for his shift at an area substation, the officers were waiting for him and had in their possession the felony warrant. Officer Wharton can then be seen in the video getting arrested, while in uniform.

At one point in the video, you see the officers remove his duty belt and searched him. After the search, they are later seen cutting off his fully marked uniform shirt. Wharton was then lead out of the substation to a waiting cruiser.

She should have pinched his nuts....LOL

Comment by Lizzette on April 5, 2020 at 9:32am
I'm sure she got great satisfaction out of stripping him of his dignity. After all he did like beating on women, so let's have one DISGRACE HIS ASS.

Comment by Mnyama on April 5, 2020 at 5:37am
@Caribmama Everyone doesn't think of every scenario in every situation. Maybe the duty of frisking just fell to her in that party department.

Trying to understand why all those men are there and the women is frisking him. That wouldn't be the case if it was a women.

Kudos That’s what needs to happen when police officers beat their wives/domestic partners!