Who Is 17-Year Old Singer Pia Mia? And Why Are Rumors Swirling That She & Kanye West Are Romantically Linked? Let's first address what we know to be true. Pia Mia is a model, singer and actress thatKanye West has taken a professional interest in.

The superstar producer/rapper has been working with Pia, real name, Pia Mia Perez,ostensibly on songs for her debut album. Hollywood Life reports that Kim Kardashian is the one that introduced Pia to her 36-year old fiance.

Pia explained to MTV News how Kanye introduced her to Drake at a Kardashian dinner and convinced her to sing Drizzy's song "Hold On, We're Going Home."

“I had no idea Drake was going to be there,” Pia told MTV News about an impromptu performance that took place while dining at BFF Kylie Jenner’s home a few months back. “I sit down and we’re eating our salad and in the middle of eating, Kanye just, like, calls me out and says, ‘Drake, you see Pia’s got some cool fashion, she’s a singer.’ It was really nerve-racking because Kim and Khloe [Kardashian] were sitting across from me videotaping. It was a really cool experience. I never thought I’d be able to sing Drake his song, so that was for sure something I’ll remember forever. Drake thought it was dope and Kanye said that he thought it was really good too." 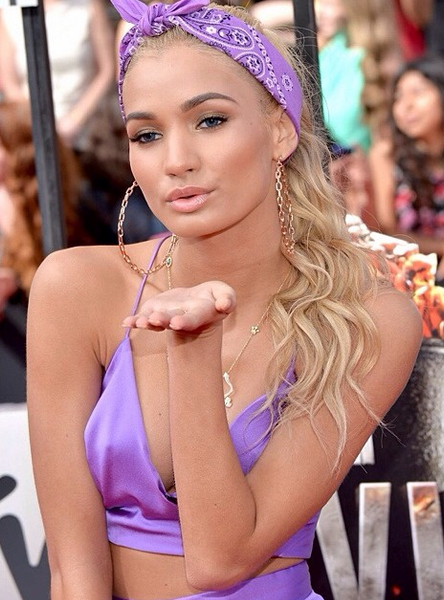 Here is where things get murky. Rumors continue to swirl that Kanye is romantically linked to the 17-year old.

Pia posted a photo on her Instagram on April 24 that got people talking. "@TheOtherWomanMovie trailer...story of my life. Guna be so hilarious! #OtherWoman #sp." 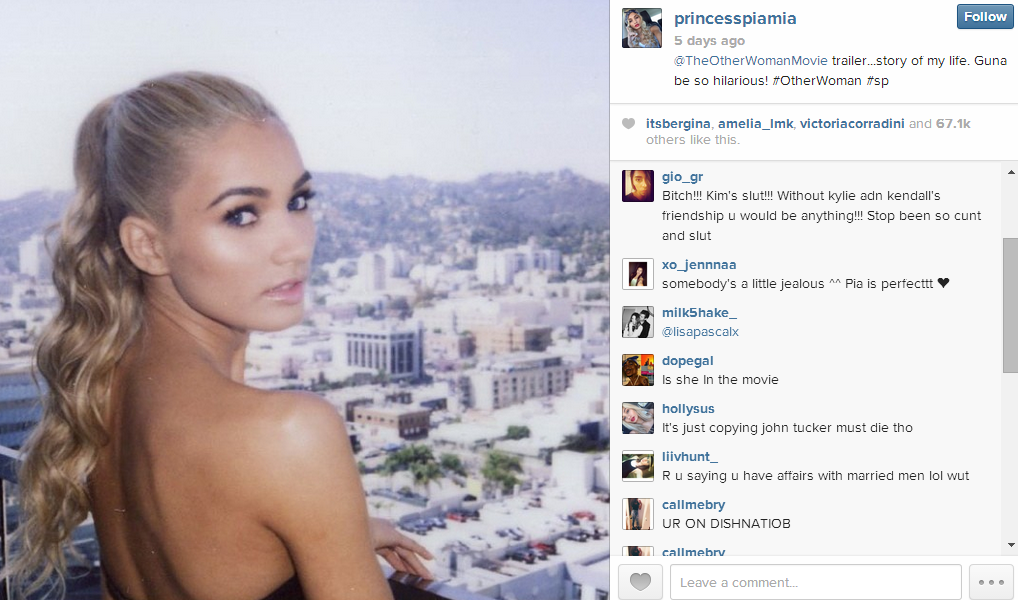 Radar Online quotes sources as saying the relationship between Kanye and Pia has their inner circles talking.

“Kanye is producing some tracks for her and he’s quite involved,” a source in his camp told Radar exclusively. “He believes she could be the next Rihanna"

“Kanye’s creative team was pretty shocked that he would use a teenager as his confidante [ on his line with APC],” the insider said. “And Kim was actually kind of agitated by it, because he doesn’t usually want her input on design stuff. She was a little jealous.”

What's your take on all of this?

She is set to take the music world by storm.

And with the help of her mentor Kanye West, the future looks bright for 17-year-old singer Pia Mia.

Radar has reported that Kanye even believed she could be the next Rihanna.

Scroll down for video... Move over Rihanna? Up and coming singer Pia Mia is said to be working with Kanye West

A source told the publication: 'Kanye is producing some tracks for her and he's quite involved. He believes she could be the next Rihanna.'

However, the site also claim that the time Kanye is putting into the work has made his fiance Kim Kardashian jealous. Working overtime: A source tells Radar that Kanye West believes Pia Mia could be the next Rihanna Waiting for Kanye? West is reportedly working with Pia Mia on some tracks in the studio Up and coming: Pia Mia Perez is a singer-songwriter from Guam who hit notoriety after covering Drake's Hold On We're Going Home

'He’s been consulting her on a lot of his creative projects, including the Kanye x APC collection.'

Pia Mia Perez is a singer-songwriter from Guam who hit notoriety after covering Drake's Hold On We're Going Home.

While the singer has a unique style, she certainly has her work cut out for her.

Singer Rita Ora, who has also been touted as 'a new Rihanna' has struggled to score any real hits in the US.

Pia will certainly benefit from having Kanye's guidance over her career. BFFs? Pia Mia is already friendly with Kim's younger sister Kylie Jenner, as the pair were photographed together last May

Comment by pussycat on May 5, 2014 at 7:48am
Thta chuck could never be another rihanna

Comment by Hamilton lane on April 29, 2014 at 10:29pm
A pretty lady with a nice voice her mixtape is good also

BS tabloids just creating drama...that's what they do best....don't believe this..ps. not a fan of Kanye or Kim!!!!!

Comment by Tony Green on April 29, 2014 at 3:26pm
My God, another person entering the back door of the business. A Little sister friend. She hasn't put the time in but has been thrust up by association and social media. Keep an ear out for Jhene Aiko, and Yuna very talented women.