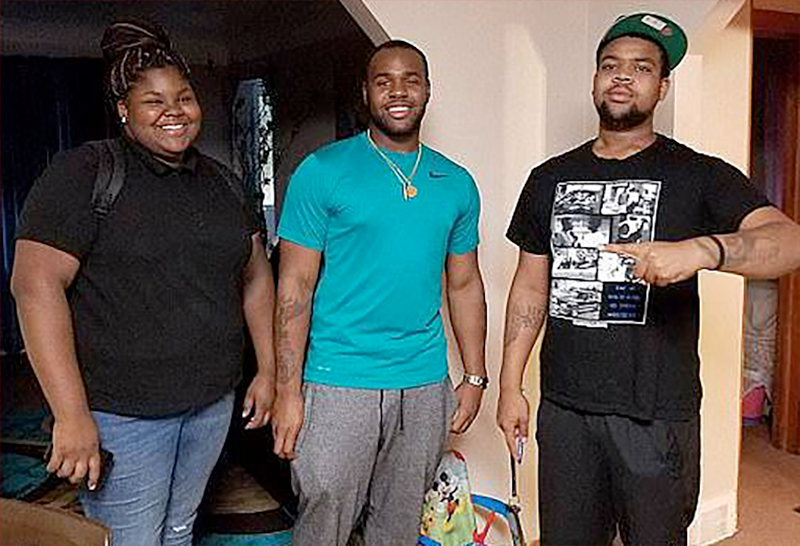 Marquise Byrd, 22, died on December 29 after four teens tossed a sandbag from a Toledo overpass hitting the car he was in

Four Ohio teenagers who pleaded guilty to dropping a sandbag from a highway overpass last December killing a 22-year-old father were given suspended sentences, a judge announced Friday.

The boys, ages 13 and 14, were instead ordered to a youth center for treatment.

Marquise Byrd died in a Toledo hospital on December 29, three days after four teenage boys tossed a heavy sandbag onto Interstate 75 striking the car Byrd was traveling in.

The young father to a two-year-old son was sitting in the passenger's seat when the sandbag crashed through the windshield hitting him in the head. Byrd was rushed to the hospital in critical condition but died from blunt force trauma to the head and neck. Byrd, pictured on the left) was the father to a two-year-old boy and was planning on proposing to his girlfriend, a lawyer for his family said The four teens pleaded guilty to either manslaughter or murder and were sentenced to the Department of Youth Services. Pictured is the overpass where the teens tossed the sandbag into traffic Pictured is the wrecked vehicle Byrd was traveling in. The 22-year-old was sitting in the passenger's seat when the sandbag crashed through the windshield

Judge Denise Navarre Cubbon said Friday that all four sentences were suspended in favor of the teens being sent to Toledo's Lucas County Youth Treatment Center.

'It's a treatment facility, for certain services, to provide so these boys change their behavior and can become productive members of our community,' she said.

'Suspended what? If you do what? So eight months you get to go home?' she told WTVG outside the courtroom.

'This child will never be at home. His son will never see him. His mother will never be able to say: "Hey son, how are you? Hows's your day?" Touch his face, see his face. This is outrageous.'

According to ABC News, 30 letters were written on behalf of the victim calling on a strong punishment for the teens.

One of the boys read a letter in court Friday apologizing to the Byrd family. A lawyer for the Byrd family said the suspended sentence was outrageous. Byrd is pictured on the right with family

'I pray for him and his family every single day and night and cannot imagine what they are going through and how they feel right now,' the teen said.

Diallo was still angered by the suspended sentence.

'Let me tell you something - at the age of 10 you know if you take something and put it in a moving lane of traffic, you should know what the consequence will be,' she said.

'You didn't take the sandbag and throw it on the side. You took that sandbag and you threw it down there to that boy's death.'

Diallo, who knew the victim, said Byrd was planning a surprise proposal to his girlfriend, the mother of his two-year-old son.

people are mad at Trump but ignore the local government that is destroying black future and black family, people are so mad what have they achieve so far, why are they still marching if they can do better, everyone says Obama was great to the black community, what do you have to show for, how is the situation in the black community? well the answer will be nothing but excuse, if the constitution says you have the right to bear arm and protect your family, but your local state rip off your rights, what does that mean to you, if NY CIty a home owner cannot own a rifle to protect his family but in long island or upstate every can, again what does that mean? you have your local government with laws that are design to enslave black men and destroy family, the DA in your town can make you take a plea deal that can destroy your future with a criminal record even when it is a false arrest, and you are not doing anything about it, keep living like that i will keep on reminding you, if you think black people git it bad especially in the urban community wait until 2020 no matter who is president you will suffer the consequence

Comment by mr1stroke on April 14, 2018 at 11:45pm
caribmama he didn't really have a strong family to stand,behind him, at his grand ma house he felt alone, I follow this case from start to end even reach out to Al Sharpton to raise funds for attorneys fee, I wanted to contribute and make sure he was good, but unfortunately he is now gone, they are many young black men like him in the system

That was a sad case, Kalief Browder. I wish he was strong enough to fight his demons.

Comment by mr1stroke on April 14, 2018 at 1:29am
Niggers running around being cool committing crimes but have no idea how to fight the law, NY have some of the worse laws in the country when it comes to blacks with the weakest black leaders, the people vote for the same people without demands they do not get involve in town hall or address thei mayors and governors to review these lawd, so the DA is just prosecuting innocent black men, they know where to get them and who is poor

Comment by mr1stroke on April 14, 2018 at 1:26am
Now people need to learn about kalief browder, he was wrongfully accused of a robbery something the police set up to make arrest, when he was accused by a dude who was in the back of the police car someone he never met they search him, and find nothing on him, than the accuser changed his story, so they arrest kalief at 16 he went to rikers he did 3 years because he could not afford the $10k bail, and he good attorney so he was assigned a legal aid who ignored the case, after 3 years he was set for trial. The DA tell him take the criminal plea he can go home or face trial of he loses he will do 15 years even though he was being abused by the officers and inmates that young brother said he will not give in, an attorney who was observing the case, took on the trial and win when kalief came home he commuted suicide

Comment by mr1stroke on April 14, 2018 at 1:13am
caribmama If you talk to anyone who is been in the system but had opportunity they will tell you it's 4 things that will save you

1- money, 2-family, 3 knowledge 4 connection to get you off, now remember the o.j. trial