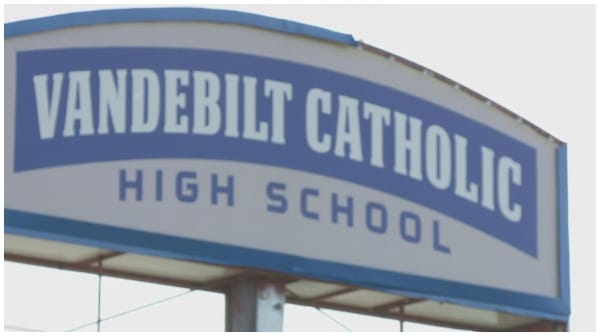 A white male student at Vanderbilt Catholic High School (in Louisiana) was arrested after throwing cotton balls at a Black student and whipping him on the back with a belt like a slave.

The disturbing incident happened last week at the predominately white, private diocesan co-educational institution for grades 8-12, located in Terrebonne Parish, Louisiana, WWLTV reports. The encounter between the two students was filmed on a cell phone by another student and shared online. In the footage, the Black student stands up and pushes the white student after he began hitting him

Police are calling it a hate crime. You can watch the moment via the YouTube clip below

The school has reportedly launched an investigation into the racially-motived assault. The 15-year-old ninth-grader who initiated the attack was booked into the Terrebonne Parish Juvenile Justice Center and charged with simple battery and a hate crime, per the report.

The archdiocese condemned the antics of the racist white student in a statement Thursday, saying, “[Wednesday’s] actions by a few are not consistent with the values and mission of our school.”

The parents of the Black boy also issued a statement thanking the community for their support. “We will continue to pray for our school community as a whole, that we not only get through this together but that we each learn a valuable lesson from what has taken place.”

The ACLU of Louisiana called the incident an “inexcusable injustice.”

“This was a child who thought what he was doing was ok. Potentially even funny. When we think about bullying, when we think about young children who experience bullying and what happens to them, this is how it starts,” said Director Nora Ahmed.

Don't hit me Massa.....I is a good boy, a disgrace to his race, that white boy should have been stomped and his teeth knocked out.

Comment by Qupet1 on March 19, 2022 at 11:59am
Oh, so that’s it? If it was the black boy who did it they would’ve dogged up him and his entire family background. Monkey really knows what tree to climb.

Comment by vaughn mitchell on March 17, 2022 at 9:26pm
Enroll, that black kid, in a boxing gym, after school, cause that's some embarrassing s***, to let a white kid beat him like a runaway slave. That white learn that racist stuff from his parents. Louisiana, figure another racist, Republican, red state.

Lol sometimes you have to laugh seeing s*** like that in 2022, but we can keep blaming others, it will never change, you say you have white friends, you believe Biden will change all, every one say they are not racist, tell me where exactly a 15 years old learn about Cotton and slavery, have some of you ever ask your white friends, what exactly have they taught their white kids? Normally these things happen with kids without fathers or father's presence, how come they don't do it to a Jewish kid? Well you believe white people will change every thing let me know when that happens

These white folks are trying there best to take us back to slavery, but guess what! it is NOT going to happen, especially with this generation now. There is no way in hell. His parents should raise hell. unacceptable period.