What Really Happens When The Airport "Loses" Your Luggage [Video] 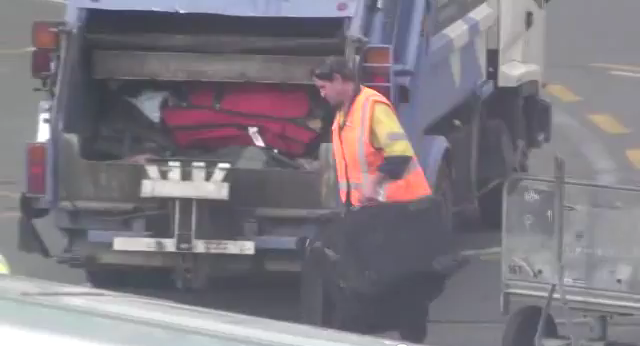 Have you ever wondered what happens to that piece of luggage that just sits there on the baggage belt with no one there to claim it?

Well, apparently, if you do not come and collect your luggage, the airport might just decide to throw it into a dumpster truck, with all of your belongings with it.

This video was shot on May 24 by a passenger sitting in an airplane on the tarmac at Christchurch International Airport, in New Zealand.

The video clearly shows a baggage handler throwing multiple bags (some of them still have the bag tags attached) into a dumpster truck, right in front of 300 passengers.

Apparently, the airport has publicly announced that the bags were not in fact uncollected luggage, but rather donated luggage that they used to test their system with, and that they no longer had any use for.

The video has already been seen over 35,000 times already.

The next time the airport loses your luggage, you might want to keep this in mind.

Wow, I didn't know that it can happen. Now I should pay more attention to luggage insurance and to airlines in general. I'm flying to Playa del Carmen soon https://worldcams.tv/mexico/quintana-roo/playa-del-carmen-beaches and it will be definitely important for me.

Comment by Kailo HENRY on May 29, 2011 at 4:33pm
Lol, I can understand what you saying but its the same as going to a car auction, you bid on a car that looks good but when you get it, there's no engine in it..Some ppl get camcorders, caneras, jewelry, high end electronics and even money. Most of these buyers are Thrift store owners...

Comment by JANICE L. on May 28, 2011 at 8:55pm
@Kailo HENRY
I can't see anyone bidding on a bag not knowing what's inside. Who would want someone else drawers? Just horrible.

Here is a LINK to the video

Traveling Tip: Pay the extra to insure your luggage when traveling, especially, if you pay good money for the contents, LV, Gucci, etc.:)

Then the airline will have to reimburse you for lost luggage.

Comment by xanda on May 27, 2011 at 11:07pm
Those bags get auctioned off in some whera house,Ybuy as is contents and all. get get

Comment by Kailo HENRY on May 27, 2011 at 3:58pm
@Janice you are right on. They send the unclaimed bags to company warehouse after holding bags for two months then people come and bid on bags without knowing whats inside bag..

Comment by JANICE L. on May 27, 2011 at 2:09pm
How much bags we're talking about that they actually threw away? Maybe the airport is lying about what they do with the bags. I noticed that they had the video removed also. I guess that was the proof. I know that's not what they do here in da U.S. Have u ever noticed that when ur at the baggage claim area there may be 1 or 2 bags still going round n round on da carousel, but has no owner? Well, the airlines have a room where they store those lost bags, strollers and other things left behind to include pkgs. How long they hold them for, I don't know. However, after a certain period they donate them to charity. I don't work for da airlines, but I travel a lot to know these things.