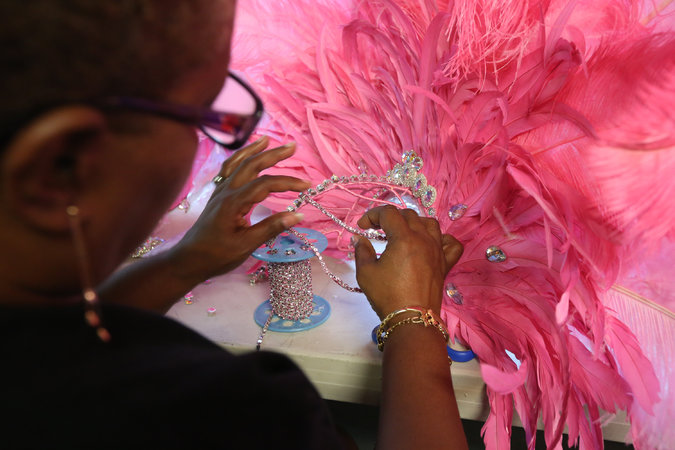 Reisha Maynard-Holder meticulously cut patterns for a collar out of foam rubber as a fan whirred in the sweltering heat. Next, she turned her attention to feathers, attaching them to the collars one at a time with a glue gun. It was another grueling evening in a monthslong effort to create some of the most elaborate and spectacular costumes seen on the streets of New York.
“These are our summers,” said Mrs. Maynard-Holder, one of hundreds of people who prepare the costumes worn in the West Indian American Day Parade, scheduled for Monday morning. More than 5,000 people were expected to take part in the parade, a tradition known as “playing mas.” And, over a million people are expected to gather on Eastern Parkway in Brooklyn for the event, which celebrates Caribbean culture with food and music. But the real stars of the parade are the bright array of costumes, visually stunning concoctions of feathers and beads, with headdresses often rising several feet in the air.
“The costumes are a symbol of the flair and vibrancy of the culture and demonstrate the pride of the Caribbean,” Jamell Henderson, spokesman for Karma Carnival NYC Band, said. “They are the centerpiece and main attraction.” 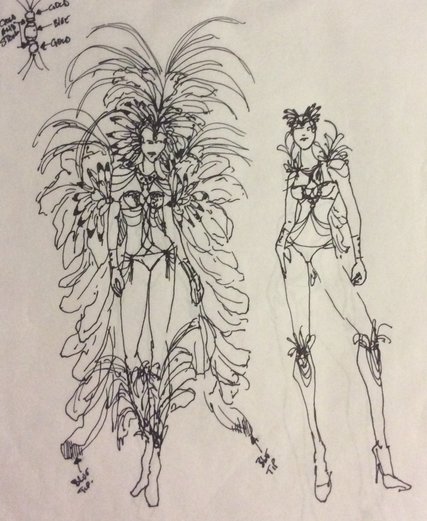 Making the costumes often begins a year in advance, shortly after the parade ends, with the bands — as the groups that participate are called — selecting themes in the fall and fabric samples in the spring. Fashion shows displaying prototypes are held in early summer, followed by production until Labor Day.
Bands can range from a few dozen members, called masqueraders, to hundreds. As a result, some bands outsource the clothing portion of the costumes to large manufacturers. To ensure quality control, many bands insist on constructing the feather headdresses and other feather pieces by hand in their mas camps — showrooms where costumes are kept on display with workrooms often at the rear.
Because of the detailed manual labor involved in making so many outfits, the production is both a well-oiled machine and a sprint to the finish, with costumes available for pickup sometimes just one week before the parade.
The band Ramajay Mas (ramajay, a Trinidadian folk word, loosely translates as “to show off”) worked with four designers on nine costumes for their theme, “Nirvana: Freedom of Self.”
But the time it takes for costumes to come together can vary.
“My whole idea was something angelic but not literally an angel, so I didn’t want to have wings on the back,” said Marlon Smart, designer of the “Heaven” costume, which took three weeks from sketch to completion.
The masqueraders, who are accompanied by a D.J. or music artist who performs on a truck, are divided into sections and assembled in a specific order to tell the theme.
Within the sections, costumes are broken into three categories based on elaborateness of design. The backline contains most of a section’s masqueraders, and they often wear a tiara or a headband, while the midline is outfitted in a feathered headdress. The frontline tends to wear the most gravity-defying headdresses, with additional feather pieces on their arms and legs. (By the end of the parade, the enthusiastic lines become blurred.)
Despite the towering appearance, even the most lavish headdresses weigh less than five pounds and take an average of three hours to put together.
For the frontline, the stunning work adds up in costs.
Reishelle Maynard-Richards, the band leader of Ramajay Mas and Reisha Maynard-Holder’s sister, said a pound of dyed feathers for one frontline headdress can cost $300. This year the band has between 700 and 800 masqueraders and the most expensive costume is $850. Althia McKenna, the secretary of the band Freaks Mas, said many masqueraders reveled in the attention, while others seized the opportunity to take part because they cannot afford to travel to carnivals in the Caribbean. “They want to represent their culture in a larger way,” she said. 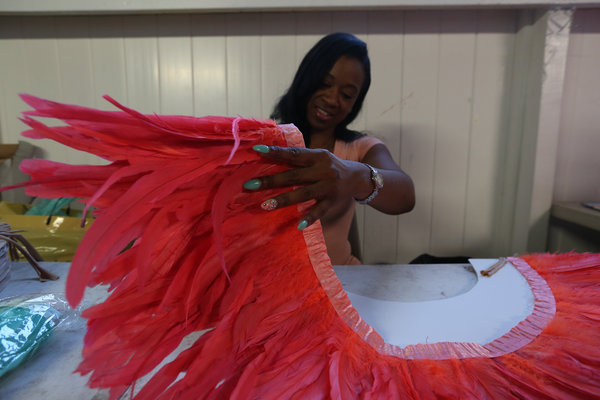 Reisha Maynard-Holder making an outfit’s collar. CreditMichelle V. Agins/The New York Times
The long hours are a labor of love and often a family endeavor.
Mrs. Maynard-Holder and her sister grew up watching and helping their father during the summer, when he would close his auto body shop to focus on making costumes. Mrs. Maynard-Richards, who comes to New York from Trinidad each summer to lend a hand in preparing Ramajay Mas for the parade, said getting the group carnival ready costs between $80,000 and $100,000.
In the intense process leading up to Labor Day, being surrounded by family can be beneficial.
“It gets overwhelming and is almost a full-time job,” said Zeelema Verwayne, the leader of the One Destiny Mas band, who works with her sister and cousins. “It means a lot to do it with family because they push me a lot to keep going.”
While the tradition of creating costumes is often passed down through generations, that does not mean playing mas has not evolved.
Across the Caribbean, carnival reflects the history of settlement in the region, with European, Asian and African influences on display in the rituals and artistic performances. In the 1970s and ’80s there was a shift to showcasing the cohesive work of each section within a band, along with higher participation partly because of an increase in disposable income, said Kenwyn Murray, who teaches in the carnival studies unit at the University of the West Indies in Trinidad and Tobago.
As a result, production began to shift from labor intensive traditional costumes, often based on folk narratives from their respective islands, to materials easier to produce in mass quantity while creating a new visual aesthetic with the use of beads, feathers and sequins. This style of carnival wear is often called “pretty mas.”
And while some may criticize the costumes — often a bikini top and bottom for women — and the dancing as being too risqué, Mr. Murray emphasizes that what seems provocative is acceptable within the cultural context.
“You’re talking about a liberation in terms of what society expects,” he said, regarding the different environment that carnival creates. “When you think about how society is structured in terms of patriarchy, playing pretty mas is brief relief from all of that.”
When the last feather is in place and bands hit the parkway, they are not only entertaining parade-goers but also competing, as judges evaluate them on overall presentation of their theme, among other criteria.
Regardless of the results, Mrs. Maynard-Richards, whose band won in several categories last year, said the goal was larger than a trophy.
“We may be competing against each other for a few hours on the parkway, but other than that it’s love for the culture and we’re just happy that more and more people can experience it.”