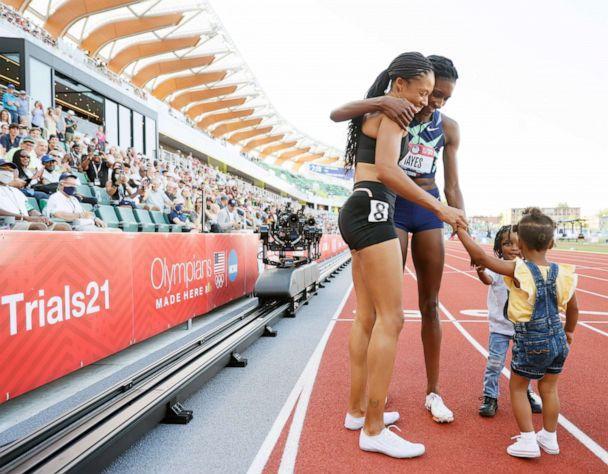 After Quanera Hayes and Allyson Felix finished their 400-meter final qualifying race for the U.S. Olympic team in first and second place, respectively, Hayes secured her spot as the U.S. national champion with a 49.78-second time, with Felix, a four-time Olympian, not far behind at 50.02.

At the finish line the two women shared a moment when Hayes thanked Felix for all the work she’s done to advocate for better maternity care for Black women and in the fight for proper maternity benefits for professional track and field athletes.

“I thanked her for being who she was and never giving up,” Hayes said. “I have looked up to Allyson for a very long time and to go through this with her as a mom makes it even more special,” Hayes said.

Then, motherhood kicked in for the pair.

Following the race, Felix cuddled up with her two-year-old daughter, Camryn, while Hayes swooped up her 2-year-old son, Demetrius. The kids were introduced to each other – with Demetrius moving in for the hug – and informed by Felix, “We’re going to Tokyo!”

Watch the 400m qualifying race, Felix coming from behind to finish 2nd, the mommy moment between Felix and Hayes, and their post-race interviews below:

Camryn, who was delivered by emergency Caesarean section in November 2018 at 32 weeks. Felix was suffering from severe preeclampsia, a pregnancy complication that is characterized by high blood pressure, among other symptoms. After a long hospital stay, Camryn finally came home with Felix and her husband, Kenneth Ferguson, and has been healthy and happy since.

Felix talks about her pregnancy experience below:

Though Felix has kept a low profile in the past, she’s proud to be an example for other mothers. “Society tells us a lot of times that you have a child and your best moments are behind you, but that’s absolutely not the case,” said Felix. “I am representation of that. Quanera is.”

Another track star joining Hayes and Felix in Tokyo is America’s fastest woman, Sha’Carri Richardson. After locking down that title and her spot on the team by winning the 100m final on June 19, the 21-year-old first-time Olympian ran straight into her grandmother’s arms.

“Without my grandmother, there would be no Sha’Carri Richardson,” she told NBC. “My family is my everything, my everything until the day I’m done.”