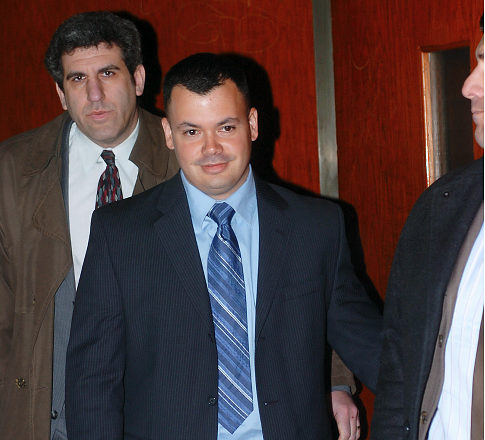 A former NYPD narcotics detective snared in a corruption scandal testified it was common practice to fabricate drug charges against innocent people to meet arrest quotas.

The bombshell testimony from Stephen Anderson is the first public account of the twisted culture behind the false arrests in the Brooklyn South and Queens narc squads, which led to the arrests of eight cops and a massive shakeup.

Anderson, testifying under a cooperation agreement with prosecutors, was busted for planting cocaine, a practice known as "flaking," on four men in a Queens bar in 2008 to help out fellow cop Henry Tavarez, whose buy-and-bust activity had been low.

"Tavarez was ... was worried about getting sent back [to patrol] and, you know, the supervisors getting on his case," he recounted at the corruption trial of Brooklyn South narcotics Detective Jason Arbeeny.

"I had decided to give him [Tavarez] the drugs to help him out so that he could say he had a buy," Anderson testified last week in Brooklyn Supreme Court.

He made clear he wasn't about to pass off the two legit arrests he had made in the bar to Tavarez. As a detective, you still have a number to reach while you are in the narcotics division," he said. NYPD officials did not respond to a request for comment.

Anderson worked in the Queens and Brooklyn South narcotics squads and was called to the stand at Arbeeny's bench trial to show the illegal conduct wasn't limited to a single squad.

"Did you observe with some frequency this ... practice which is taking someone who was seemingly not guilty of a crime and laying the drugs on them?" Justice Gustin Reichbach asked Anderson. "Yes, multiple times," he replied.

The judge pressed Anderson on whether he ever gave a thought to the damage he was inflicting on the innocent. "It was something I was seeing a lot of, whether it was from supervisors or under-covers and even investigators," he said.

"It's almost like you have no emotion with it, that they attach the bodies to it, they're going to be out of jail tomorrow anyway; nothing is going to happen to them anyway."

The city paid $300,000 to settle a false arrest suit by Jose Colon and his brother Maximo, who was falsely arrested by Anderson and Tavarez. A surveillance tape inside the bar showed they had been framed.

A federal judge presiding over the suit said the NYPD's plagued by "widespread falsification" by arresting officers.

Comment by Russell David III on October 19, 2011 at 8:36pm
This sounds like Legal Organized Crime from within. NYPD will never get it because they don't want to. Any person of color who wants to become a cop better think about the nature and sub-culture of policing.

Comment by Bombahdrop on October 16, 2011 at 12:27pm
@BOBBY I SAID THE SAME THING, IT'S FOR REAL! Good people never done nothing wrong in there life , clean record , who think to themselves hey i have nothing to worry about except thugs, but guess what you have to now worry about the cops stopping and frisking you hauling you off to the precinct for booking without giving you the reason until after they ran you through the finger print,palm print, photos taken, then they tell you what they are charging you with, which will leave you dumb founded Once you hear the bullshit lie they are charging your ass with, These pigs proceed to fabricate a false report on you, for something that you did not do.

Comment by Cynthia Edwards on October 15, 2011 at 10:48pm
This breaks my heart. Who will protect us in the light of this blatant misuse of power.

Comment by Danny Cushnie on October 15, 2011 at 12:51pm
Its here today and gone tomorrow until the next time.POLICE; right there full of S***. Who can you trust if you cant trust them.My cousin is a cop and I dont trust his ass.

Comment by Bombahdrop on October 15, 2011 at 12:12am
I agree 1000000% with Oliver. Totally we have to make noise about this or it will be swept under the rug, like they are trying to do with the wall street protesters as we speak.

Comment by victor serrano on October 15, 2011 at 12:05am
Thats why I don't trust the police. I wonder if any of those ducking clowns arrested me. I was not guilty every time but if Ur black or Hispanic your f**** I glad they cought them. Now there f*
c*!!!