WATCH: School Bars 6-Year-Old Because He Has Dreadlocks

FULL STORY AND VIDEO AT: https://heavy.com/news/2018/08/watch-school-bars-boy-dreadlocks/ 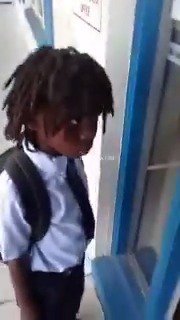 This is absolutely infuriating.

This sharp young Black boy, clean as ever, gets kicked out of school because he has dreads.

His father rightfully struggles to maintain his emotions at the disappointment of it all.

A Christian school in Florida told 6-year-old Clinton J. Stanley, Jr. that he couldn’t attend his first day of school — because he had dreadlocks. You can watch the video, shot by C.J.’s father, above.

C.J.’s father, C.J. Stanley Sr, took his son to his first day of school at A Book’s Christian Academy, located at 1001 Roger Williams Road in Apopka, Florida. You can see that 6 year old C.J. is dressed up for school, in a blue button-down shirt and pressed pants. But teachers at the school tell C.J. and his father that the child can’t come to school because his hair is too long.

You can hear the distress in C.J. senior’s voice as he reacts to the news. “Stay calm,” he advises himself. “Don’t trip.”

He asks the teachers whether it would make any difference if he braids his son’s hair. And he points out that the teachers themselves have long hair going down to their shoulders. But the teachers simply reply that the rules are the rules.

Six-year-old Clinton Stanley, Jr. was denied attendance to the elementary school of A Book's Christian Academy in Apopka, Florida because he wore a dreadlocks hairstyle. https://www.rawstory.com/2018/08/black-boy-turned-away-florida-christian-school-natural-hair/ …

A 6-year-old black boy with dreadlocks was turned away from his Florida elementary school because his hairstyle was banned, reports the Orlando Sentinel. Clinton Stanley Jr. was to attend A Book's...


Sue Book, the school’s administrator, says there is nothing unusual about the school’s rules against long hair for boys. And she says the school has been dealing with an “unfair backlash” as outraged parents view the video of C.J. being turned away from school.

Book said that one man had threatened to burn the school down. She said she’s been dealing with “obscene, ugly” phone calls.

Some parents have been writing angry reviews of the school on Yelp, with one person writing, “Discriminatory practices towards children of color due to their *hair.* You couldn’t PAY ME to send my child there.” You can read more responses here.

People/folks why would you send this child to a Christian school? look at him!  it’s obvious they wouldn't let him in, his appearance is the opposite to the Christian faith. This is very important, and I mean very, very important! To people/folks who might not do the research, asked questions in anything you/they are about to do or say, before going/put into action, if you have a different believe system, views point, then what you about do, or embarking on, don’t put your children thru stuff like this. Plain and simple, he does not belong there and they don’t want him there. Unfortunately, and yes, I said unfortunately, because some of us can’t even shape ours, much less to shape the lives of our children/s, and if and when we are about to do so, do it right. Again, GOD MUST BE WHITE.

What year is this according to the Gregorian calendar?