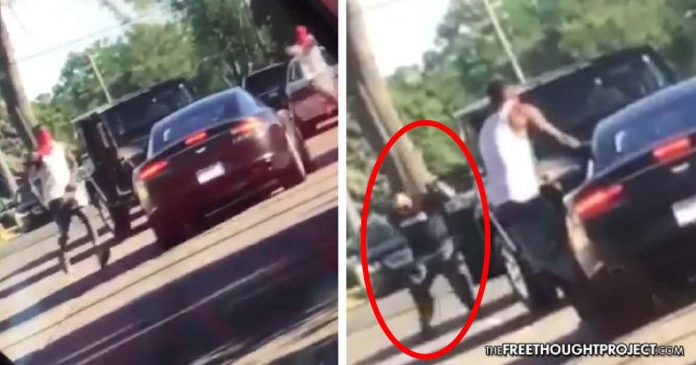 A fake carjacking scene for a rap music video nearly came to a tragic end over the weekend when police mistook the scene for an actual crime and opened fire.

Failure to obtain a permit to shoot a rap video can and will be met with deadly force, especially if that video contains a fake crime scene. Just ask Dushon Shepherd, 26, and Keenan Black, 39, both of Detroit, what happens when you film a rap video without first getting permission.

Over the weekend, Shepard and Black took part in the filming of a rap video. One scene in the video, in which Shepard and Black were actors, required them to pretend to carjack another person in an Aston Marton.

The duo donned their red bandanas and toy guns and acted out the scene by driving their doorless Jeep and running up to the sports car. They got out of the car, ran up to the Aston Martin — also occupied by an actor — and shots rang out. These shots, however, were not part of the film.

A Detroit cop ran up to the scene, thinking a real carjacking was taking place, and opened fire on who he thought were real carjackers. Luckily, none of the shots hit anyone.

After the shots rang out, the actors immediately got down on the ground and the incident was over.

It is important to note that faking a carjacking of an Aston Martin at 6 Mile and Mcnichols, in the middle of a crime stricken area, is a terrible decision.

Lack of permitting aside, the rap group should have cordoned off the area and alerted any bystanders that a mock crime was about to take place for the purpose of the rap video. Their actions could’ve had far more serious consequences than an officer merely firing off rounds.

READ MORE:  No Charges For Cop Who Killed 19-year-old Preschool Teacher As She Drove Away From Party

After police figured out that it was a fake scene, the three men participating in the act were arrested and taken into custody. It took three days for police to figure out what to charge them with.

Shepherd and Black have since both been criminally charged for unlawful possession a facsimile firearm. They now face up to 93 days in jail.

Even if these men get the full 93 days each, it is far better than the alternative which would’ve landed them, or some innocent bystander, six feet under.

While this officer opening fire, for all intents and purposes, was justified, the Free Thought Project has reported on similar incidents before — in which police had no right to act that way.

In 2015, the set of a rap music video featuring French Montana, Busta Rhymes, and Ja Rule was raided by police, who made five arrests for nonviolent crimes. According to The New York Post, nosy neighbors with nothing better to do called the cops. They saw a number of people on the video set using drugs, and also noticed that a small number of the 200 people on the set were armed.

There was no violence taking place, no person was being harmed, and no property was being damaged; it was just a group of artists and actors having a good time, and filming a music video.

Before that, San Francisco rap artist, Yung Lott was filming a music video at a public park in Bayview-Hunters Point, when their production was rudely and unlawfully brought to a halt.

READ MORE:  'He Was Not a Thug': Cop Shoots into Car of Innocent Kids, Kills Unarmed 15yo Boy

As the video begins rolling the group is quickly interrupted as swarms of SFPD officers surround the group and demand they all put their hands up and get on their knees.

In an exclusive interview with the Free Thought Project, Storm said that this police action wasn’t over a filming permit like police originally claimed.

“It wasn’t over a permit; there were cops that drove by and saw what we were doing and said nothing,” Storm said.

While police were tight-lipped about their rights-violating free for all, Storm says he heard one of them say they were “looking for a black male.”

Apparently the nearly 20 men in attendance for the video, all must have “fit the description.”

About 30-seconds into the video, police with guns drawn swarm in on this peaceful group of people, who were only filming a video.

As the video below illustrates, it does not take a fake carjacking scene for cops to hold people at gunpoint for filming a video.

Comment by vaughn mitchell on June 14, 2017 at 5:39pm
Only an idiot film a rap video without a permit. I was in a movie years ago filmed in BK, it was a club scene involving, gun violence inside the club. They had teal cops outside the club to let people know a movie scene is being filmed so other trigger happy cops don't shoot up the place. You get a damn permit