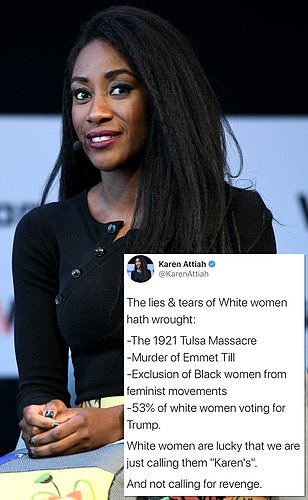 The Washington Post's opinions editor has been accused of inciting violence after posting her inflammatory tweet on Sunday. There are calls for her to be fired, but The Post has not publicly responded

The Washington Post's opinions editor has been accused of inciting violence for tweeting that white women are 'lucky' black people are 'just calling them Karen's and not calling for revenge'.

Karen Attiah posted the tweet on Sunday, saying: 'The lies and tears of white women hath wrought; the 1921 Tulsa massacre, murder of Emmett Till, exclusion of black women from feminist movements, 53% of white women voting for Trump.

'White women are lucky that we are just calling them Karens. And not calling for revenge.'

Later, in her comments section, she doubled down on the remark, saying: 'I'm just saying. Be happy we are calling for equality. And not actual revenge.'

The tweets sparked outrage from other users who called for her to be fired.

'Oh so insulting generalizations based on race and gender are okay now? Or are they only okay for you? Just trying to understand the rules,' conservative writer Matt Walsh replied to Attia.

'You threaten white women with violence. WashPo what is your response? The world is watching and waiting,' another tweeted.

Soon after, the hashtag #fireKarenAttiah began circulating on Twitter.

As of Tuesday morning, the newspaper has not publicly commented on Attiah's incendiary remark.

'Karen' is a derogatory term being given to entitled, white women who are caught on camera or video trying to assert themselves over people of color in social situations.

Many people called out Attiah over the irony that her first name is also Karen.

After widespread outrage, Attiah deleted her tweet - but she insinuated that it was not because she regretted her remarks.

She retweeted another user who stated: 'When I tweet something and then delete it, it's not because I regret it. It's almost never that. I just want to say some s**t real quick and then leave.'

Comment by mr1stroke on July 3, 2020 at 6:00pm
This country could of embrace the beauty of yesterday, if the people stood up fight and get rewarded for unfairness, by doing that the government could celebrate every group the same by acknowledging the wrong and apologize as a celebration like they do for 911 every year, but the people are weak they dont demand nothing

This country is an embarrassment. SMDH!!!!!

Comment by mr1stroke on July 3, 2020 at 5:15pm
And there are those who are black and celebrate 4th of july holiday especially those who lives in NY what happened in 1827 around the 4th, what do you really know about this holiday, where was black people then, do you ever ask questions or do your history

Comment by mr1stroke on July 3, 2020 at 2:23pm
Spanish people were already insecure and consider their selves as white, they are more happy about that than to complaint, its the start of reality at one point every one will have to pick a group, spanish people will pick white and have always felt that way, white people will always have their ways no one is fighting back

You know what they are feeding to our brown (Spanish and Latinos) brothers and sisters? America is trying to take their culture and identity away from them. When we were filling out the application for our gun permit and race came up, the instructor says you either pick black or white, the government does not recognize you as other. My jaw almost hit the floor. Now you KNOW, the majority of those Spanish people are going to check off white. And this is the thing, they have always pitted the Spanish race of people to come over to the white side. They use these folks against us to big up their numbers because their race is dwindling and most Spanish and Latinos have falling for it. When they couldn't win against up they flooded the country with them in 1960's so they could have the numbers against us, but that didn't stop them from being racist towards them, they just wanted them to check off white so they could have their numbers. There are those who are proud of where they come from and who they are. I know most Mexicans are proud of their Taino Indian heritage and some consider themselves afro latinos. What I'm concerned about if this is being done in Florida, is this being done all over the entire country? Our brown brothers need to wake up and realize they are being used and their identity and heritage is being erased.

Comment by mr1stroke on July 2, 2020 at 3:01pm
caribmama why are our kids are ashamed not only of their history but of who they are? It is simple lets not blame the kids or the younger generation do the analysis, the parents are not educate about their history, they dont teach their kids no history, majority of the negros are ashamed of who they are, thats why they always celebrating every one else, they wear brand names even if they are homeless instead of investing in their selves or their kids, they make their kids celebrate st patricks day and Cinco de mayo among many others, negros would brag about how many race they are mix with instead of embracing their selves, the older generation abandoned the younger generation thats why there is no respect or love

You have a group of people who cannot think for their selves, if democrats say today Donald Trump is a good person they love him they will hang with him watch how many niggers would follow, its sad to hear niggers trying to defend their causes but they cant do it for them they must include brown people as soon as they do a speech they say black and brown, now who are the brown people and when the last time the brown people come to the defense of black people, niggers cant even appreciate and brag about their own they are condition to speak how white people want them to speak, we both know all that black and brown started with white democrat politicians, since when people in the community used to talk about brown people, the put a label on you and include you so they van do for others and you embrace it and you have the nerve to tell me not to call you niggers, i challenge any intelligent negro to define the word n***** other than what white people tell you that it means

If you cannot think for your self you are useless and that is a n*****, its not what people call you its what you answer to, if dont live like a n***** and classify my self as a n***** because i know my worth and self value why would i answer to any one who is calling the name n***** only if i am ready to shoot so why even turn around, niggers dont take pride of their culture but white people package it and sell it to them and every one else, the only people who are not capitalize off their culture are niggers

Yes Mr1stroke, we don't have the revolutionist of days pasts. Our forefather's fought for what? We tried to build up black pride so our simp kids just pass over our black legacies to these cave dwellers. Why are our kids embarrassed by their black history? Are jews embarrassed by their Holocost History? No, they put that shiit on a pedestal to let the world know what was done to their people. Those people (Slaves and Jews) weren't weak...they were scared, confused, and did what they had to do so the next generation could survive. We should not be embarrassed by our history. We need to make sure everybody knows the struggles, revolts, and accomplishments of our ancestors. Our sons and daughters need to start looking at their brothers and sisters as a step up....Not a STEP DOWN!