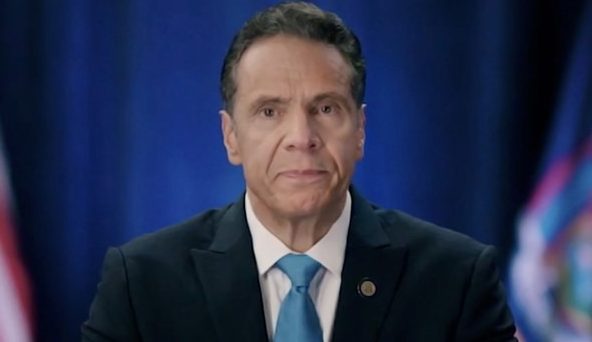 Disgraced Gov. Andrew Cuomo is not featured in Spike Lee’s new four-part documentary, “NYC EPICENTERS 9/11➔2021½,” sparking speculation that he was cut from the project.

Page Six writes that “Cuomo may have been interviewed for the doc, only to be dropped at the last minute before the HBO release on Aug. 22.”

Check out the trailer for Lee’s 9/11 documentary below.

Last week, the governor of New York announced plans to resign amid accusations of sexual misconduct.
“My resignation will be effective in 14 days,” Cuomo said in a livestream.
The governor’s decision to step down comes after independent investigators for the state’s attorney general office found that he sexually harassed multiple female members of his staff. New York Attorney General Letitia James announced her office’s findings earlier this month
“We find that the Governor sexually harassed a number of current and former New York State employees by, among other things, engaging in unwelcome and nonconsensual touching, as well as making numerous offensive comments of a suggestive and sexual nature that created a hostile work environment for women,” the investigators wrote in their 165-page report released on August 3.
Cuomo’s resignation marks a steep fall from grace, with the three-term Empire State governor once considered a future presidential candidate.
When New York became the epicenter of the US’s COVID-19 outbreak in spring 2020, Cuomo took a star turn in Democratic politics through his daily coronavirus briefings, which earned him an international Emmy award and record approval ratings among the state’s residents.