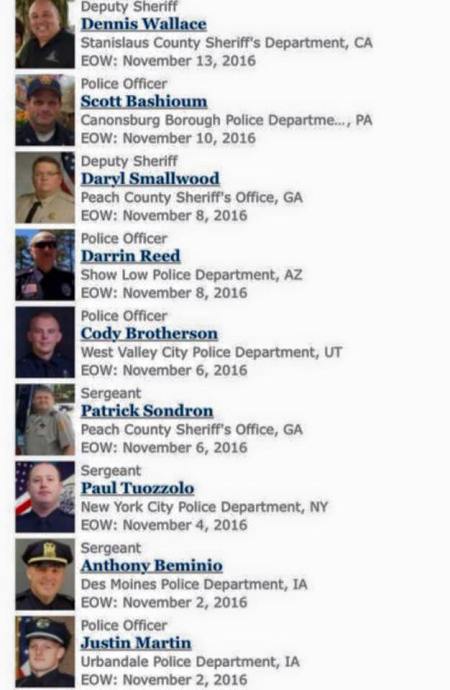 9 cops killed in 11 days.
You know why the media isn’t talking #BlueLivesMatter?
Because these police officers were killed by WHITE people. #AllwhitekillersMatter?violentwhiteamericans.jpg

Nine White Cops Killed in 11 Days By White Men: Where was the Media Coverage?

The media continues to show us their agenda. We saw an astronomical number of black men killed on film by police for seemingly existing. The media lead us to believe the victims’ appearance or background justified their lives being taken. This lead to an eruption of protests in many major cities throughout the United States. One tragic evening at a protest in Dallas a sniper killed several officers and the media quickly blamed Black Lives Matter. No apologies were issued when it was discovered that the shooter had absolutely no affiliation with BLM.

The media was silent about 45 year-old Larry Darnell Gordon, a White man, who murdered two white police officers while attempting to escape police custody. Instead, they chose to focus on villainizing BLM protesters. So we shouldn’t be surprised by the minimal coverage we have seen about the nine white police officers killed by white men within 11 days, that’s almost one death per day.

These were senseless killings that received little to no coverage. One officer was killed after responding to a domestic violence dispute, his partner was shot as well but survived. Another officer was shot and killed after someone called the police on their neighbor who threaten to shoot him and a friend. While approaching the home the person who threatened their neighbor shot at the officers killing one. Three teens stole a car, then later struck and killed an officer with the stolen vehicle. These are just of few of the senseless encounters that took the lives of nine cops. How much have you heard about incidents?

In an article in The New York Daily News, Shaun King explained that “71% of police who’ve been shot and killed so far in 2016 have been killed by good old-fashioned White men.” Although this is a fact we rarely hear about any of these deaths on the news. Instead we hear this made up term, “black-on-black crime” exploited almost daily and rarely speak on white-on-white crime or high percentage of white officers that are killed by white men.

Let’s stop believing this false reality the media continues to feed us and realize there are good and bad people in the world and they come in many different races, ethnicities, and religions.

But this is where those of us that know better come into play. We always have to add our $.02 when we're attacked on these shows or social media outlets (Us Defending us, for the most part).

Have a place where the link/info is saved and always accessible. Always be ready to present at least 3-5 for argument or debate. Chat room, blogs, online news outlets, talk show call-ins etc. We have to force the truth out. Force the debate, Challenge with facts on deck., Our shows and some of theirs types, because you'll find that sometimes people just don't know about some of this stuff, including our own people, and they will agree with the crowd or what's popular, being ignorant to the truth. And these types are our worst enemies because they share the same skin and they will be played in a heart beat to justify BS when ever they need a coon. (The reality is some don't know or realize they are coons until they're really deep in it. Then they turn it into a fight to protect themselves personally and emotionally, pride etc. But informing people early can nip a lot of that stuff in the bud.)

Cuz this would not cuz racial tension.....

This is sickening.Real sick in today's world

This doesn't fit the usual narrative framed through the media into society and around the globe( I mean,how do you now justify killing any black males in cold blood!?)

Killing their own is not news worthy to those in control of telling/selling a potrayal!

They are rarely depicted as criminal ... usually sell as a mental issues gone awry with most.
Blacks are criminal in nature by a narrative being potrayed(*forget about the individual circumstances if you are black*) ... and so the story goes... all subliminal!

Since the inception of race...

I blame this on the Fraternal Order Of Police.

I bet they won't tell you about white on white crimne!!

Does white on white crime even exist?  Of course it does. I watch COPS.  But white people don't want to read about how bad other white people are.  White people are only interested in reading about black crime, not white crime.  White crime is justified in this country while black crime is not.  The double standard exists.  The media manipulates prejudice by exposing what they want to portray and not the entire truth.

Comment by Jerimiah 1:4--10 on December 7, 2016 at 7:59am
Wake up everybody no more sleeping in bed, the world won't get no better if we just let be, we gotta change it y'all, you and me (Teddy Pendergrass). Image is everything expose good black image, we complain about how are image is portrayed but what are we doing to expose good black n brown image?

I guess that these police killings of white police officers by white criminals was not whom the Law and Order president elect was talking about.This is the blatant racist double standard that is to tear this country apart.