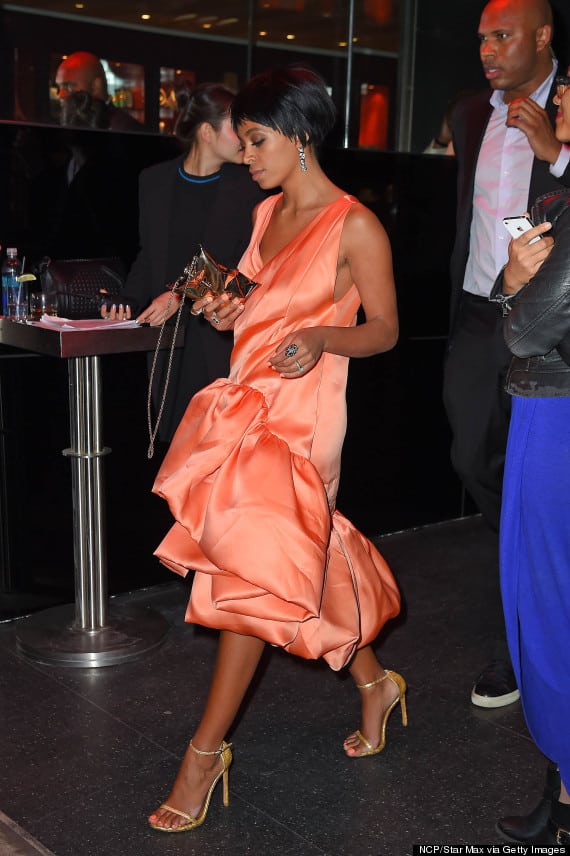 Solange Knowles, moments after assaulting Jay-Z in an elevator, is seen leaving the after-party for The Costume Institute Benefit Gala on May 5, 2014 in New York City. (Photo by NCP/Star Max/Getty Images)

*May 5th may be Cinco de Mayo, but for the BeyHive, it’s the day that Beyonce’ssister Solange attacked Jay-Z in the Met Gala elevator in 2014.

The grainy, black and white footage of Solange punching, shoving and kicking her brother-in-law dropped jaws around the world. Even more alarming, Beyonce stood perfectly still, hands clasped in front of her, and simply watched it all go down. Fans wondered what in the world Jay-Z had done to warrant zero attempts from his wife to stop the assault. In fact, the only time Beyonce moved was to get out of Solange’s way, and to straighten the bottom of her dress that had become disheveled by the attack.

A security guard eventually pulled Solange off of Jay-Z, and lil sis was shown in the video-only footage pointing and saying what appeared to be choice words.

Months later, Bey would make her first lyrical reference to the incident in the remix of “Flawless,” with the line, “of course sometimes s**t go down when it’s a billion dollars on an elevator.”

It didn’t take long for dribs and drabs of tea – and an entire serving of “Lemonade” – to come spilling out about Solange’s motivation. The Internet quickly pointed its finger at fashion designer Rachel Roy – also the ex-wife of Jay-Z’s former Roc-a Fella partner Damon Dash – as the proverbial chick on the side in this situation. The Hive came for her in the worst way – not like a swarm of bees, but like a herd of buffalo. TV chef Rachel Ray even got caught up in the stampede for no other reason than their similar names.

Some in the BeyHive also buzzed around Roc-A-Fella artist Rita Ora as a possible suspect, but the British singer had receipts proving that she wasn’t the other woman. Ora revealed a selfie taken with Bey at the Met Gala, proving that she was not a source of Solange’s ire that night.

Two years later, Beyonce birthed one of her most critically acclaimed albums, “Lemonade,” that unpacked her feelings about infidelity in both song and visuals, presented in a 65-minute “Lemonade” film that debuted on HBO. One of the tracks, “Sorry,” warns a philandering partner that he better “call Becky with the good hair.”

Roy’s ex-husband, Damon Dash, refused to discuss the “Lemonade” issue at all, even to a bunch of clergymen. Here’s his appearance on “The Preachers” talk show in 2016.

In 2017, Jay-Z finally spoke about the elevator incident in interviews for the album “4:44,” his lyrical response to “Lemonade.” Here’s Desus & Mero discussing Jigga’s response.

She punched Gay-Z in those liver lips and busted that camel nose.

Acquire the services of a proficient essay writer from our team at a reasonable price. Our service understands that our clients are students, and hence they operate https://rankmywriter.com/discount-codes/payforessay-net-promo-code on budgets. Thus our price for the service is meant to be affordable to a majority of them.

This is the type of shite that gets notoriety and keeps sheeple distracted while real issues should be talked about.  Is this garbage about the rich and famous really news worthy, while 80% of the population suffers?