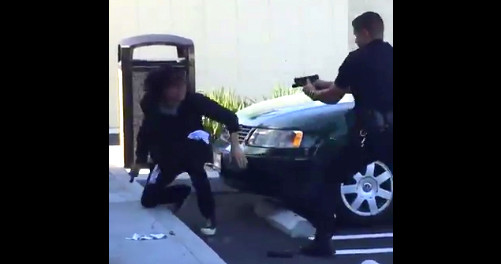 A 17-second video of the incident was initially posted to Twitter just after 9:30 a.m. It shows an officer firing multiple times at a man, who falls to the sidewalk.

A Huntington Beach Police Department spokeswoman said the officer contacted a male individual outside the 7-Eleven at 6012 Edinger Ave. and they “got into an altercation.” Then an officer-involved shooting occurred and the male was taken to a hospital with unknown injuries, police spokeswoman Officer Angie Bennett said.

At a 6 p.m. press conference, Huntington Beach Police Chief Robert Handy said police do not yet have information on the man’s identity. He emphasized that the investigation, being handled by the Orange County Sheriff’s Department, is in its early stages.

Officials did not issue or receive a call requesting a law enforcement response at the 7-Eleven prior to the incident, Handy added, saying it was still unclear why the officer made contact with the man in the first place.

However, the violent confrontation did begin shortly after the officer arrived, the police chief confirmed.

The officer involved in the incident had not been interviewed by Friday evening, Handy said. He cited a California law that allows officers to “calm down, adjust and get representation” before delivering testimony.

The officer was equipped with a body camera, but Handy did not know whether it was turned on.

A few additional seconds of video captured by the same photographer who tweeted the shooting footage appear to show the officer struggling with the man, whose back is on the pavement. The man appears to take something off the officer’s duty belt before the officer pulls away and shots are fired.

The additional video was distributed to local television news stations by a freelance news photographer, who also tweeted the footage.

Two witnesses who were separately going to the 7-Eleven described the events. Both witnesses, who each did not want to be identified, said the officer approached the man, who then swung a punch toward the officer. One of the witnesses said the man “hit” the officer, while the other said the man “tried to throw a punch.”

In the video showing the gunfire, the man, clad in dark pants and sweatshirt, is clearly holding something in his right hand before the shots are fired, causing him to convulse and stumble.Then the man and the officer were on the ground wrestling when the man grabbed what appeared to be the officer’s “magazine clip,” both witnesses said. Handy could not confirm what item was taken from the officer’s belt, but said equipment was removed.

It was not immediately clear if the officer fired live ammunition or nonlethal rounds. When asked about this, Bennett repeatedly responded that the shooting was “an OIS.”

According to Handy, the officer also attempted, unsuccessfully, to use a stun gun.

In the video, six shots are fired and then someone yells something that sounds like “Get down, get down.” Then a seventh shot is fired and the man stumbles backward and collapses on his side.

The officer picks up a radio and speaks into it, but it’s not clear what he says.

In the hours after the shooting, people gathered outside the store, where a small memorial with flowers had been placed for the man killed. Neighbors in the area argued about whether the shooting was justified.

“Somebody was coming up from the ground in an aggressive stance, turning, raising something,” said Brandon Dehaas, one neighbor at the store. “As an officer, I would have fired too because I’m going home to my wife and kids.”

Another neighbor said it seems like police officers need more proper training to de-escalate such situations without using lethal force.

“The way I feel — these officers are not being trained right,” said Marie Sales. “And they don’t value human life, because if they valued human life, they would not jump and be so trigger-happy.”

Witnesses reported a female employee inside the store was grazed by a bullet. Handy confirmed that was a minor injury to a bystander, but said he believed it was a shard of glass, not a bullet.

The officer, who has not been identified, was placed on administrative leave, per department protocol.

Marina High School, at 15871 Springdale St. and diagonally across Edinger Avenue from the 7-Eleven, was placed on lockdown. The school tweeted that there were many police patrol cars on scene and that students were safe.

Some students said they left school after the lockdown was lifted, too disturbed by the shooting to return to class.

“That was actually basically seeing a person die. It’s not like the movies,” said student Carmella Marshall. “It’s really real.”

Me me I agree, he was close enough that he could have done that

vaughn mitchell he did taser him but it didn't affect him. they tussled and the pussified cop feared for his life and shot dude 7 times. from what i can determine, someone called in a false report on the guy, saying he kidnapped a girl and got him killed. that person should be jailed

Comment by vaughn mitchell on September 23, 2017 at 10:37pm
That was a cold blood murder, holy s***, this is what I am talking about cops going around cold blood killing innocent people, no crime was being committed, no cops was call about a crime, he had no weapons, he could have taser the man he just shot him three times damn. These a******* call me for donations, I just hang the phone up on their ass.