( Posters perspective: SO HIS WIFE WAS A GOLD DIGGER OR AS I LIKE TO PUT IT: “A MERCENARY LOVER” TAUGHT BY HER MOTHER TO BE THAT WAY. MEANWHILE HE AND HIS PARENTS WERE ESTRANGED—MAKES YOU THINK UUUMMMM )

Kobe Bryant, 41, tragically died in a helicopter accident in Calabasas, California, on January 26, as reported by TMZ. In addition to the pilot, seven other people were traveling with the retired NBA star, including one of Kobe and wife Vanessa Bryant‘s four daughters, Gianna, 13. There were no survivors.

As the world mourns the untimely passing of Bryant, his daughter Gigi, and the seven other victims on board on the helicopter, the former Los Angeles Lakers star’s wife and her family mourn the loss of a husband, son-in-law, and father. On January 29, Vanessa changed her Instagram profile picture to a photo of Kobe and Gianna, her first public move since the devastating crash.

While Kobe, unfortunately, was not on speaking terms with his parents, Joe Bryant and Pam Bryant, since 2013, he always remained close with Vanessa’s mother, Sofia Laine.

Vanessa and her older sister were mostly raised by a single mom. Vanessa was just three years old when her mother divorced her biological father. However, in 1990, Sofia remarried to Stephen Laine, and even though he never officially adopted Vanessa, Vanessa legally changed her last name to match that of her stepfather. When Vanessa became engaged to Kobe, who was 21 at the time, she was still a senior in high school, and much like Kobe’s parents, Laine had his own apprehensions. “He was an adult and she was only 17,” Laine told the Daily Press. However, unlike Kobe’s parents, Mr. and Mrs. Laine attended her daughter’s wedding to the NBA superstar in April 2001, which took place in Dana Point, California.According to an interview with The Los Angeles Times, Joe and Pam Bryant had a hard time with the fact their son was marrying so young, without a prenuptial agreement, and that Vanessa was a Latina woman instead of an African American woman.

After the wedding, the Bryants moved from their home in Pacific Palisades to the Newport Coast to be closer to Vanessa’s family.

Here’s what you need to know about Vanessa Bryant’s parents:

After nearly 13 years of marriage, Vanessa’s mother and stepfather split. It was a tumultuous time in Vanessa’s life as Kobe was going through his very public rape trial in 2003. And while Sofia Laine continued to have her daughter’s back, she told reporters “We keep to ourselves, and those who want to talk can talk,” said Sofia Urbieta Laine. “The people who say negative things, God will take care of them.”

When Vanessa and Kobe were headed toward divorce in 2011, her ex-stepfather had some choice words for his now-estranged stepdaughter. Laine told TMZ, “Her mother taught her well to wait for the 10-year mark [before divorcing]. In California, it’s considered a long term marriage and then she gets paid for life or until she remarries… just like her mother is doing to me. I have to pay her mom $1,800 every month and clearly, they don’t need it” – referring to how rich Vanessa and her mother would be if the divorce with Kobe proceeded.

Laine, who has since started a new family said, “I have a six-year-old daughter and that money could be used toward her college fund or something… you’d think she’d care… but no, she’s spiteful.” 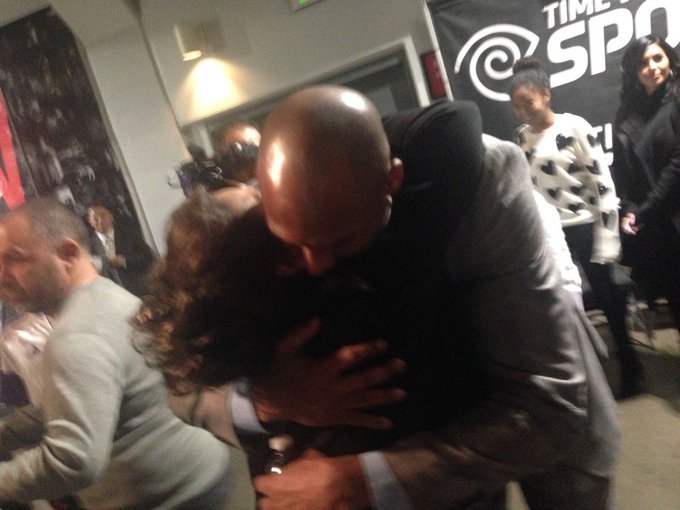 While Pam and Joe Bryant were not invited to see Bryant’s final NBA game, his mother-in-law was not only in attendance, her son-in-law enveloped her in a huge emotional hug afterward. Sitting alongside Vanessa, and their two children at the time, Natalia and Gianna, Sofia looked on with pride as Kobe ended his historic career with the Los Angeles Lakers.

Sofia is also a grandmother to Vanessa and Kobe’s youngest daughters, Bianka, 3, and Capri, who’s 7 months.

The Lakers retired both of Black Mamba’s career numbers, 8 and 24, in December 2017. Kobe attended with his wife Vanessa and daughters Natalia, Gianna and Bianka. While noticeably absent were Kobe’s mother and father, his mother-in-law, Sofia, was there to cheer him on while holding her grandbaby Bianka courtside.

During Kobe’s emotional speech, he did not mention or thank either Pam or Joe Bryant. The former NBA star thanked his wife, whom he called “an inspiration,” and the Hall of Famers who came before him.

Pam and Joe Bryant were still estranged from their son following a dispute in 2013 when they tried to sell nearly $500K worth of Kobe’s memorabilia behind his back. In 2016, Kobe said in an ESPN interview, “Our relationship is s***. I say [to them], ‘I’m going to buy you a very nice home,’ and the response is ‘That’s not good enough’? Then you’re selling my s***?”

Sources told TMZ at the time that Pamela felt Kobe was giving more to his mother-in-law. Kobe had Sofia living in a $3.2 million house in Newport. After the home was sold, he reportedly moved her to another multi-million dollar mansion nearby.

After Bryant sued Goldin Auctions, the brokerage company Joe and Pam used, they came to an agreement a week before his case was set to go to trial in New Jersey. However, the icy relationship between Kobe and his parents continued on.

It’s bittersweet and heartbreaking to look back at the Bryant family enjoying their last Thanksgiving together as a family. In their well-decorated dining room table, all four daughters, Vanessa, Kobe, and Sofia shared their holiday meal together.

Kobe shared a few photos from the Thanksgiving holiday with the caption, “Thankful for my family.” In the first photo, Sofia is sitting right next to Gianna.

So now, Mom and her daughter have all the money they ever wanted----GOLD DIGGERS

Kobe's mom & dad should've talked to Kobe not demanded at Kobe. That's ur son's money & life not that other parent!

vaughn mitchel She taught her daughter to be a gold digger/mercenary lover and to land a wealthy Black athlete..

Comment by vaughn mitchell on February 1, 2020 at 6:52pm
They are all wrong Kobe, and his parents.