Valerie Capers Workman, one of the highest-ranking Black employees and the head of human resources at Tesla Inc., is stepping down at the end of January to join Handshake, a career network firm. She is poised to become the chief legal officer at her new job.
At Tesla, Workman’s voice has stood out on the electric vehicle company’s COVID-19 stance, according to the L.A. Times. Her presence and rank have also sent the signal that the company is eager to eliminate the race ghosts that have haunted some of its vehicle plants.
Speaking to the Times, Workman stated she was sad leaving but also proud she was leaving the company in a better state than she found it.
“I am proud of all that I was able to accomplish at Tesla with the support of truly excellent colleagues, especially the People and Legal teams,” she said, before adding that she needed to pass off the baton in a better place than when she received it. 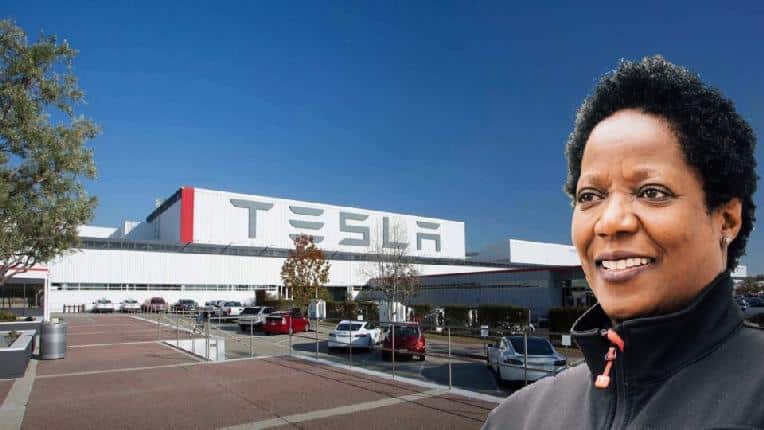 Workman joined Tesla in 2018 and was promoted to head the Human Resources in 2020 at the height of the Black Lives Matter movement. After the promotion, she reported directly to Elon Musk and was the force behind Tesla’s first Diversity, Equity, and Inclusion report. She also gave employees Juneteenth off.

But her efforts didn’t save Tesla from two high-profile settlements following lawsuits against the company. The company was sued for racial discrimination and its poor treatment of Black employees.

Last August, the company paid Melvin Berry more than $1 million for its failure to stop its supervisors from using a racist term to call him. When he confronted a supervisor about this frequent habit, Berry claimed he was in turn forced to work longer hours with heavier equipment

Again in October, a federal jury ordered Tesla to compensate Owen Diaz $137 million. Owen is another former Black employee who also faced workplace racial abuse, but on which the automaker turned a blind eye.

African Americans make up 10% of Tesla’s workforce, but only 5% of the company’s high-ranking workforce is Black. Workman has made it clear that the lawsuits and the related racial issues no longer reflect what Tesla stands for nowadays.

Here at this site really the fastidious material collection so that everybody can enjoy a lot. Zonnepanelen Scherpenheuvel-Zichem

This is a fantastic website , thanks for sharing. Thuisbatterij

This post is very simple to read and appreciate without leaving any details out. Great work! Zonnepanelen Rotselaar

That is very helpful for increasing my knowledge in this field. Accumulatieverwarming vervangen

I am very enjoyed for this blog. Its an informative topic. It help me very much to solve some problems. Its opportunity are so fantastic and working style so speedy. water warmtepompLucht

The next time I read a blog, I hope that it doesnt disappoint me as much as this one. I mean, I know it was my choice to read, but I actually thought you have something interesting to say. All I hear is a bunch of whining about something that you could fix if you werent too busy looking for attention. Zonnepanelen Overijse

Great survey. I'm sure you're getting a great response. Geothermische warmtepompen

With so many books and articles coming up to give gateway to make-money-online field and confusing reader even more on the actual way of earning money, Zonnepanelen Oud-Heverlee

Two full thumbs up for this magneficent article of yours. I've really enjoyed reading this article today and I think this might be one of the best article that I've read yet. Please, keep this work going on in the same quality. Warmtepompen 2023

This is my first time i visit here. I found so many entertaining stuff in your blog, especially its discussion. From the tons of comments on your articles, I guess I am not the only one having all the leisure here! Keep up the good work. I have been meaning to write something like this on my website and you have given me an idea. Zonnepanelen Merchtem