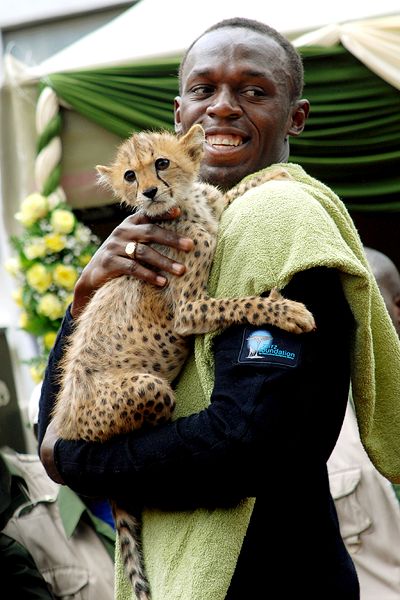 The Jamaican sprinter's sponsorship of the 3-month-old male cheetah is part of an effort to boost Kenyan conservation efforts of its famous wildlife, whose survival is threatened by trophy hunting, climate change and human encroachment.

The world record-holder in the 100 and 200 meters paid $13,700 to formally adopt the cub. He will also pay $3,000 a year to care for Lightning Bolt, who will be raised at an animal orphanage in Nairobi.

The money will go to the Kenya Wildlife Service, and some will be used to protect Kenya's endangered species, KWS director Julius Kipngetich said.

Bolt was joined on the trip by Colin Jackson, a former 110-meter hurdles Olympic champion, and Jochen Zeitz, the chief executive of athletic gear manufacturer Puma. Zietz made the visit to launch his charity's campaign to preserve ecosystems. Also popular NYC radio personality Dahved Levy host of his #1 Caribbean Fever radio show on 107.5 WBLS happened to be in Africa hugging and patting the cheetahs on the head. 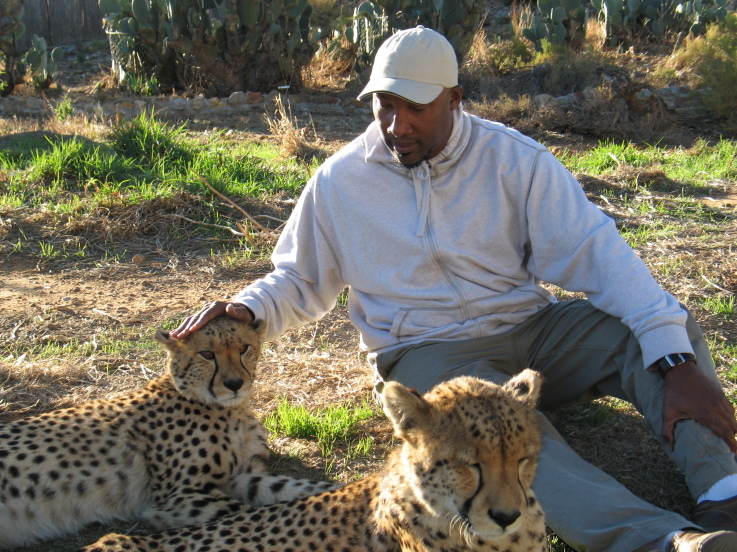 Jackson adopted a 2-year-old eland, the largest of the antelope species.

Bolt, who was on a four-day visit to Kenya, said Friday he was looking forward to seeing Kenya's diverse wildlife but was scared of meeting lions.

He nearly ran away when asked Monday to pet a fully grown cheetah named Sharon for a photo shoot with Kenyan Prime Minister Raila Odinga. Bolt had Zeitz stand in for him, until he saw that Sharon seemed harmless.

The world record-holder appeared more comfortable later while handling his baby cheetah, which was the size of a fully grown domestic cat. He cradled the fuzzy-headed cub while feeding it bottled milk as cameramen snapped away.

When asked if he was afraid of cheetahs, Bolt said: "Yes, I was, but not anymore."

Lightning Bolt is among three cubs rescued by KWS officials after their mother abandoned them in a game park.

Not only is it his pet, it's his sprint-training partner.

he need to keep them well fed cause when they get hungry he sho-nuff cant run faster then a Gazelle.

I like the idea and I hope that Usain is also helping out his (and also my) depraved country. Jamaica is suffering bad bad..

Don't get it twisted Choclitt, Dahved don't like women. It's a front him putting on when he's on the radio. I know his ex wife.

Wicked, but not me!