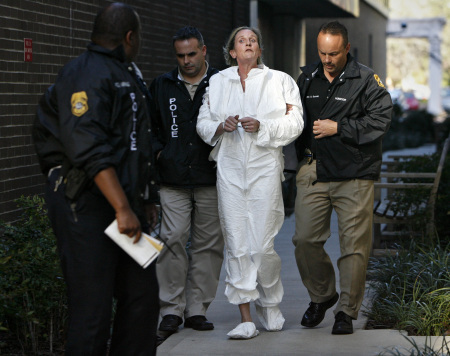 The wife of a senior US military officer shot and killed her 13-year-old son on their way to soccer practice, then returned home and shot her 16-year-old daughter in the head while she studied at her computer, police said.

The woman told detectives she killed the teenagers for being "mouthy".
Julie Powers Schenecker, 50, admitted the killings when officers found her covered in blood at the family home on Friday, a police spokeswoman said.
Ms Schenecker's mother had called police from Texas because she was unable to reach her daughter, whom she said was depressed and had been complaining about her children.

Ms Schenecker's husband, Parker Schenecker, is a US Army intelligence officer stationed at US Central Command headquarters in Tampa, Florida.
Colonel Schenecker was in Qatar at the time, and was told of his children's deaths on Friday, an army spokesman said.

Ms Schenecker left a note detailing plans to kill her disrespectful children and herself.
The note said "they talked back and were mouthy and that she was going to take care of it", a Tampa police spokeswoman said.
"I think we will never understand how or why a mother could take the lives of her children," the spokeswoman said. "That was the only reason she provided to our detectives."

The body of Ms Schenecker's daughter, Calyx Powers Schenecker, was found in an upstairs bedroom. The body of her son, Beau Powers Schenecker, was found in a four-wheel-drive in the garage, police said.
An arrest affidavit said Ms Schenecker shot her son twice in the head "for talking back" while driving him to soccer practice on Thursday night.
She drove home, went inside and shot her daughter in the back of the head while she was doing homework, then shot her in the face, the affidavit said.
Police said investigators believe the children "never saw it coming". Both were killed with a .38-calibre pistol.

Ms Schenecker was arrested on two counts of first-degree murder and remanded in custody.
Her Facebook page says she earned a bachelor's degree in physical education from the University of Northern Iowa.
Sylvia Carroll, who was at high school in Iowa with Ms Schenecker, said she was a popular and athletic girl who starred in basketball in the late 1970s.

They reconnected about a year ago on Facebook. "I'm just in shock," she said. "I can't believe this."
The Schenecker family home is on a cul-de-sac in a gated country club community in north Tampa.

@Big(Guns)Marie-that's right, and you go girl! Structure, discepline and goals sandwiched with love was how I was raised and my daughters as well...that's why they are sharp, well rounded and actively chasing their goals. Heck, my 17 year old just auditioned for Juilliard a week ago on a whim, just to see where she was stacked against her peers! I was tearing up as I waited two hours for her to come back down and I was three days out of eye surgery!

So you see, kids just need attention, motivation and focus to get away from the street influences and the media manipulations....

Comment by kcrunchone on January 31, 2011 at 9:15pm
Feel for the children and the father, there should be no feeling for the thief that stole Gods gift of life from them.

I feel very sorry for this woman(mother).From a mother view you have to have faith and more faith to handle these children.

Comment by Andrea Brown on January 31, 2011 at 12:10pm
ITS BEST TO BREAK THE TREE FROM IT IS YOUNG SORRY BUT THIS IS TOO DRASTIC AND TOO LATE

Comment by Valerie Smith on January 31, 2011 at 10:53am
she probly was going through hell with these kid ,these kid now a days dont have any manners want to talk to u any how i am sorry for the mother because she has to go and do time now thats a shame my prayers are with her..

Comment by Malcolm X on January 31, 2011 at 3:56am
A lot of times in the hood, if you don't beat your kids, the cops and the correction officers will.

Neglecting a child includes unreasonably inflicting or allowing the infliction of harm or substantial risk thereof, including excessive corporal punishment. Fam. Ct. Sec. 1012.[Ci.] Parent/guardian/other person with care and supervision of person under 21, can use non-deadly physical force when and to the extent he reasonably believes necessary to maintain discipline or promote welfare of person force performed upon. Penal Sec. 35:10.[Cr.]


Aka you are allowed to hit your child; you are not allowed to leave marks/bruise or use any objects.

Comment by Malcolm X on January 31, 2011 at 3:43am
This lady is a nut. Thousands of kids talk back. It's called adolescence. Maybe an excessive beating but hitting your kid with a burner. the fact that the grandmother called the police all the way from texas means they knew she was off her rocker. This had nothing to do with bad kids, it was some lady that should have been on medication.