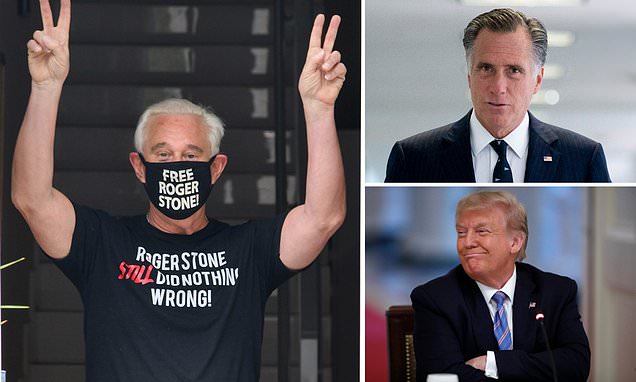 Mitt Romney has slammed Donald Trump for commuting the sentence of his close friend Roger Stone just days before he was scheduled to enter federal prison.

The Republican senator - who has been a vocal critic of the President on previous occasions - posted a savage message to Twitter on Saturday morning, which read: 'Unprecedented, historic corruption: an American president commutes the sentence of a person convicted by a jury of lying to shield that very president.'

Stone, 67, was set to spend 40 months behind bars after a jury found him guilty of obstruction, witness tampering and making false statements in connection with Robert Mueller's investigation into Russian interference in the 2016 election.


Trump commuted Stone's sentence on Friday afternoon, describing his friend of 40 years as 'a victim of a corrupt and illegal Witch Hunt, one which will go down as the greatest political crime in history.'

Stone was seen outside his Florida home Saturday morning in slippers and a customized mask as he celebrated swerving time in the slammer.

Romney - who was the lone Republican to vote to convict Trump during his Senate Impeachment trial in February - joined a chorus of prominent Democrats outraged by the move. 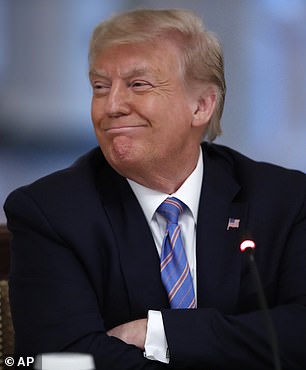 Mitt Romney has slammed Donald Trump for commuting the sentence of his close friend Roger Stone just days before he was scheduled to enter federal prison. 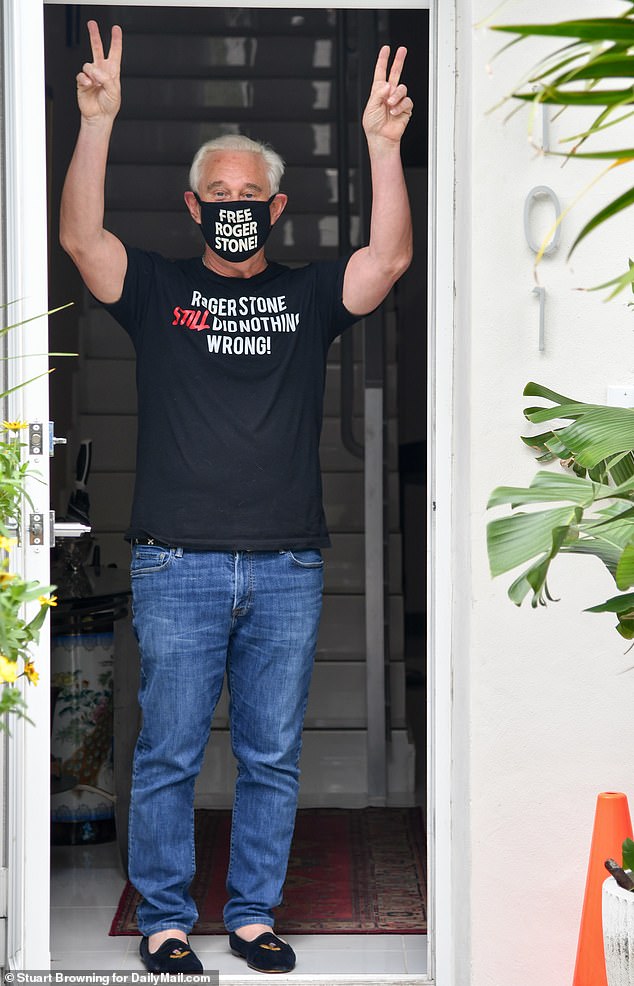 Stone, 67, was set to spend 40 months behind bars after a jury found him guilty of obstruction, witness tampering and making false statements in connection with Robert Mueller's investigation into Russian interference in the 2016 election. He is pictured outside his Florida home on Saturday morning

Trump's 2020 Presidential opponent, Joe Biden, released a statement through his spokesperson claiming the Commander-in-chief had 'once again abused his power' and was 'laying waste to the norms and the values that make our country a shining beacon to the rest of the world.'

Biden further urged voters to boot Trump out of office at the November election, saying: 'He will not be shamed. He will only be stopped when Americans make their voice heard at the ballot box this fall. Enough.'

Senator Elizabeth Warren took to Twitter, stating: 'Donald Trump has abandoned the rule of law and made a mockery of our democracy. He truly is the most corrupt president in history.'

Florida Rep. Val Demings blasted: 'Roger Stone was sentenced to prison for an illegal cover-up of the pro-Trump Russian attack on our 2016 election. For the president to now commute his prison sentence is pure authoritarian corruption.' 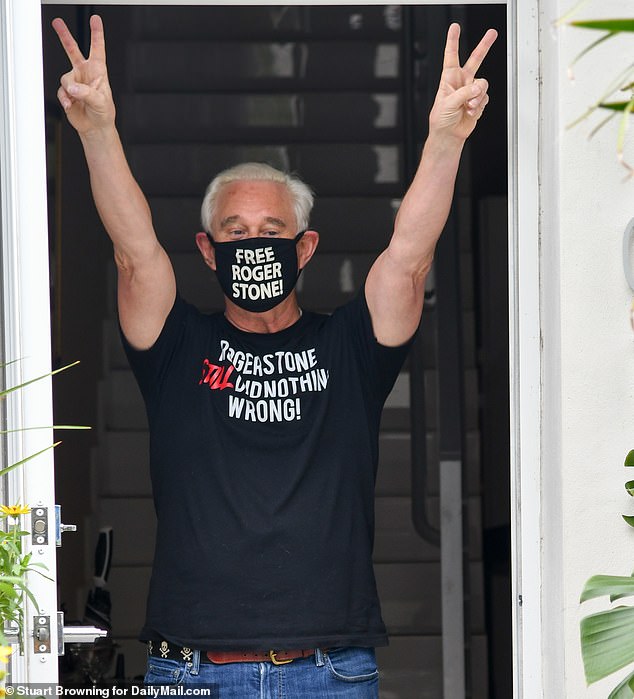 Stone was certainly in a celebratory mood as he posed at the doorstep of his home Saturday. The convicted conservative political strategist is still on house arrest, so was unable to go further than his front gate 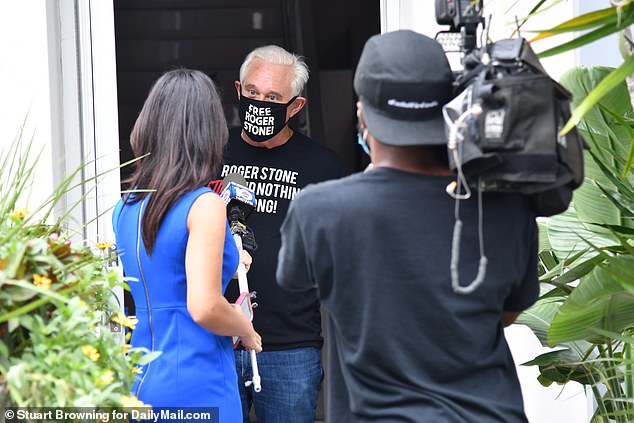 Stone spoke with local reporters outside his Florida residence

She added: 'Regardless of our political parties or differences, we all know this is disgraceful. Pray that our republic will endure.'

'Trump commutes the prison sentence of Roger Stone while the officers that killed Breonna Taylor are still free. The two systems of justice in this country must end,' she railed. 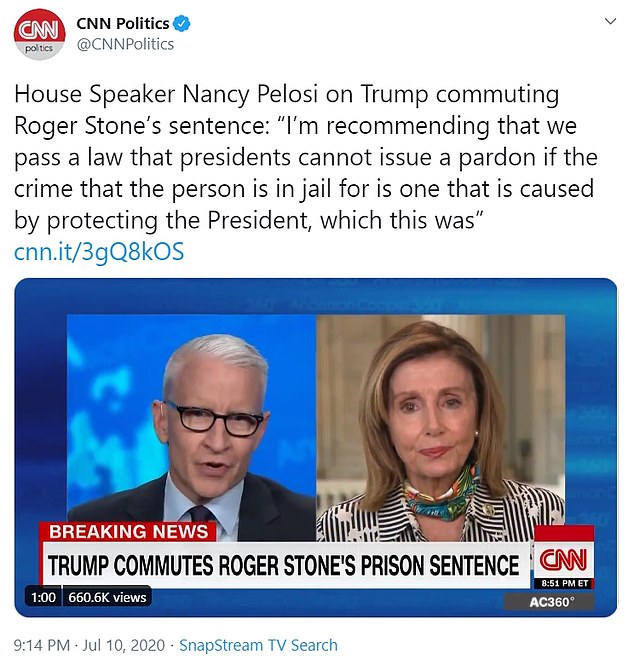 However, Trump supporters have taken an opposing view.

In a statement, White House Press Secretary Kayleigh McEnany called Stone a 'victim of the Russia Hoax that the Left and its allies in the media perpetuated for years in an attempt to undermine the Trump Presidency.'

Last month, Trump tweeted that Stone was 'a victim of a corrupt and illegal Witch Hunt, one which will go down as the greatest political crime in history.' 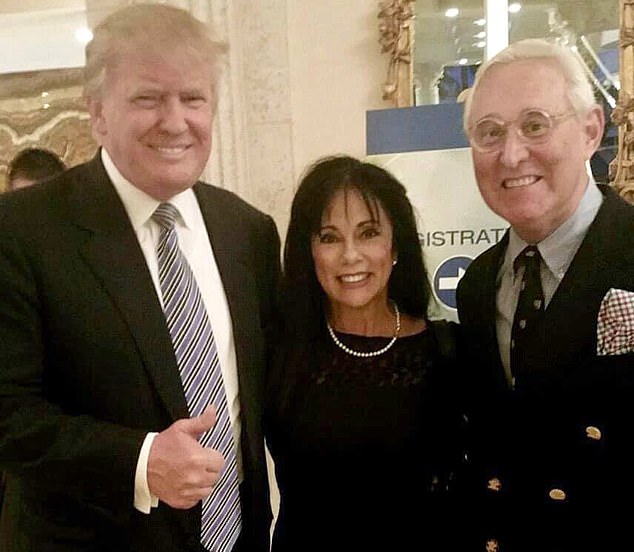 Trump and Stone have been friends for 40 year.s The pair are pictured with Nydia Stone in this undated file photo

Following news of the commuting of his sentence, Stone stepped outside his Florida home to celebrate with well-wishers.

'The president has saved my life, and he's given me the opportunity to fight for vindication,' he stated.

Stone said that entering prison would have been a death sentence in light of the coronavirus pandemic.

'I'm 67 years old. I had very, very severe asthma as a child. If you look at the profile of those who are most at risk, I think I fit that,' he said.

'This is a horrific, horrific nightmare when you realize that ... this investigation never had any legitimate or lawful beginning,' he said.

'It was a witch hunt. There's no question about that.'

Stone told the New York Post that the president spoke to him by telephone and informed him of his decision to commute his sentence.

'I told him I was grateful,' Stone sa

Comment by mr1stroke on July 13, 2020 at 12:03pm
And for those who are so against Trump tell me a little about Biden let see how intelligent you are and i can tell your life style by your political decisions lol this is not a joke, politic is real. So please educate the rest of us about Biden, what makes him better and what will make him do the better according to what you know, this is not an argument or debate, its a question according to many comments, so get to the point so the rest of us cam research the information that you have, otherwise we understand what several lives dont mean nothing by zipcodes

Comment by mr1stroke on July 13, 2020 at 11:59am
And you should already know i dont give idiots a pass, dont come with the bullshit talking about youre not here to talk about your personal life or brag, your education is personal, the college you went to is personal. If it was suppose to be public you would post a copy of that degree you claim you have all over the web, so back up your claim, otherwise shut the f*** up you insecure n*****, its easy to tell when youre talking to those slave niggers, they are quick to tell someone about their education but they are still struggling in that so call hood, if you a 4 year degree and make less than 100k a year you are struggling, unless you're living a project life, just minus the mortgage, and than that car note or insurance, and that is one car if youre living a good life you should have at least 2 or 3 cars now do the math how much is left out that 100k after tax, than comes the utilities, the cell phone bill, and than food, dont play with me i can tell a broke insecure n***** by the way he sounds, as for me there are those on here who have met me at business seminars, and interacting with proof so ask about me n***** i was born in poverty out of North Philly now i own parts of the united states i will not die poor, n***** f*** your education

Comment by mr1stroke on July 13, 2020 at 11:50am
vaughn mitchell and what do you do with your college GPA what is your level of achievement, you have been bragging about your college education but you have yet to provide a summary of your achievement with all that education, we have yet to hear the name of that college, if you can tell people all about that so quick but where is a little proof, otherwise no one cares, life is about mathematics if you can brag that much about your education you must be the smartest n***** around your surroundings, i only have a years liberal art so i could pursue my business dreams instead of ever working for any one if your achievement dont double match my surviving than you are a waste my man lol did you realize i used the word "surviving" to make you sound important now tell us about your success otherwise why tell us about your education

Comment by Andra Goodie on July 13, 2020 at 11:41am
Anyone who has morals and standards would never do this bullshit. Trump is the scum of the earth. I can't wait for his disgusting ass to be out of office soon.

Comment by mr1stroke on July 12, 2020 at 1:45am
Lol thats what you supposed to do when youre in power, you would do it to Mitt bullshit, any one who says they wouldn't do it needs to be shot, every one wants to sound good online, they all want to look good and going against others because they either not in position or useless to do the same