Unemployment benefits are making people stay at home, according to Republicans 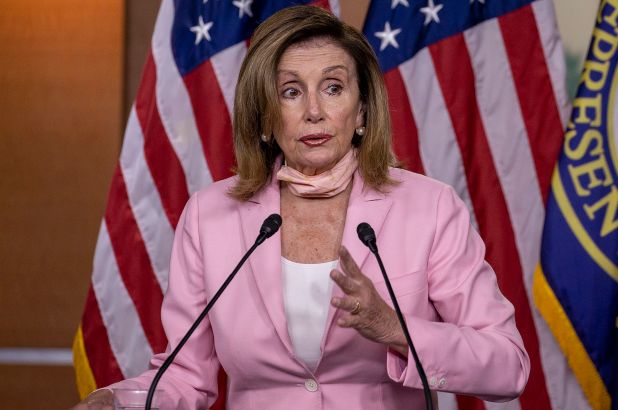 U.S. Speaker of the House Rep. Nancy Pelosi (D-CA) speaks during a news conference on July 24, 2020 in Washington, DC. House Democrats urge House Republicans to extend unemployment benefits that was passed as part of the CARES Act which is due to expire on July 31, 2020.

Republicans like Treasury Secretary Steven Mnuchin believe that the $600 weekly benefits that are being given to unemployed Americans, are causing people to stay at home and not look for work.

“We want to make sure that there’s a technical correction, so that people don’t get paid more money to stay home than to work,” Mnuchin said.

“The original unemployment benefits actually paid people to stay home and actually a lot of people got more money staying at home than they would going back to work,” Meadows said, in an interview on ABC’s This Week.

Mnuchin said that he spoke with House Speaker Nancy Pelosi on Friday about negotiating a partial extension of employment benefits that would last until the end of the year.

The Trump administration and many Republicans want an extension of benefits that would replace 70% of wages that a person would have made if they were still employed.

Pelosi, alongside other Democratic leaders, do not want a short term extension nor do they want a reduction.

“The reason we had $600 was its simplicity,” Pelosi said from the Capitol, The Morning Callreported.

The $600 unemployment benefits will expire on July 31, and those without jobs will have no additional assistance during the pandemic.

“We don’t want a short-term extension either, we want something till the end of the year,” Mnuchin said.

Meadows and Mnuchin revisited Capitol Hill to apply “final touches” on a $1 trillion bill, which is expected to be announced on Monday, Politico reported.

At first, they deliberately inflate hysteria in the media so that people are in a panic and sit at home. Now they are outraged by the result !! Politics is truly the mother of all lies. I am an ordinary guy and I understand that I cannot just rely on the benefits. I found a part-time job for myself even during quarantine - https://aussiepokiesclub.com/real-money-casinos/ Gambling has helped me support my family financially. My opinion is that whoever wants will always find a way out.

All i have to say is this, there is a deadly disease/s out there and the government has been telling the world to wear a mask social distance and stay home and they are giving us our own money, tax payers money to keep us destracted from whos to blame for this crime on humanity. second of all how do you expect people to distance themselves when and if one goes to/back to work when your job interacts with people that puts you at a high risk for exposure. Yea some do want to sit back and collect but many do want to go to work but the workforce is now difficult. many aren't opening back up, many are not hiring ..  bottom line they urging people to stay home then they complaining we just want to collect a check and sit home which i find to be bullshit. everybody dont feel the same way. im sick and tired of this dirty as world and the evil people on it.

Same to you @mr1stroke Stay safe and blessed.

Comment by mr1stroke on July 28, 2020 at 12:54am
Lu thank you abd thank you, my little niece is 17 she fike for a business certificate and start her homebase business for a web company she contracted with, she is making $17 per hour plus commission by advertising on the web for those companies at her own time, i have some of my friends with driver license i rent them cars they are doing delivery as well as working for another company so yes this is the best time to capitalize just like those white folks are doing.

You have niggers in the community who are lazy and love to rely on hand out from our hard tax money, just like those who claim they wont work for the white men, but they can rob a mother or father doing 2 jobs while they are either on welfare or living in the project with their moms or baby mamas, it is so freaking retarded thats why they are struggling, living in high crimes neighborhood their kids are olin gangs at 13 and the democrats only offer them hand outs, no opportunity to business, and they will be upset at people like you and i who suggest a business, no one can build wealth on hand outs, you have to work, invest and own a business to a better life, and some of us are doing just that, i am happy for you and your family, much success on the way up

MY DAUGHTER, SISTER, AND BROTHERS WORKS FROM HOME. I work my small business from home. There's money to be made, but folks do not want to take advantage of the loopholes. The hustle doesn't stop until DEATH. SELAH

Comment by mr1stroke on July 27, 2020 at 3:36am
Lol niggers like you belong on the plantation why do you think its so okay, you niggers rather buy a nice cars with high interest rates and live in the project and brag about it too, or live with sone dumb chicks, just like the masters give you free housing and food but you work the plantation for free instead of paying you or give you your own land, you niggers love slavery i stop feeling sorry for niggers a long time ago, you niggers have no shame as long as its free you will do anything, but guess what i dont care if they burn all those getting gree bees out my tax my money, white or black f*** you all, get up and work like the rest of us damn lazy niggers, i hate niggers you are the cursed to the black race you dont deserve to live

Comment by mr1stroke on July 27, 2020 at 3:30am
MIKE WILLIAMS no you are a dick rider, your masters dick, the democrats, you are a free loading n***** who is missing the point, those mufuckers are getting 600 a week meaning that is on top of what they already getting, why would they go to work, what kind of n***** idiot are you, what school did you go to, what kind of math class did you take, how will you run a great economy by giving hand outs to every one? on the same token NY is complaining they will lay off 22000 city workers they cannot handle the benefits, if the economy is so great, why do you need federal help, how about you stop collecting welfare and start learning about business, you ignorant n*****, i dont talk to niggers who have no idea what business is, you niggers will suffer after that election i will be on this site laughing at every comment when you niggers start complaining, by the way it starts already, your NY governor is cutting $20 million dollars out funding from hospitals and schools, you go on and read where those cuts are coming from since you know how to read you slave n*****

mr1stroke, you are a peace of s***.. You uncle tom boy... You're missing the picture because your uncle tom ass is blind

Comment by mr1stroke on July 26, 2020 at 5:53pm
Only an idiot would see something right with that since many idiots cant count or know nothing about business, but usually those are the one who loves hand out, you have people clearly bragging about why should they go yo work when they can make more money at home with that unemployment benefit those same people refuse to go back to work or look for new job especially the females with multiple kids, now at whose expense so you want to sit at home and get $600 for each kids while they raise my taxes and rest of us are busting our ass, i hope you and your kids die, and i wish someone would shoot Nancy pelosi and all the democrats who see something right that, the same thing happened under Obama when he kept renewing the unemployment oh niggas loved that but look what happened no one wanted to go back to work, this is the reason why i now favor the republicans i graduated from the slave mentality, they offer opportunities its up to you to find it, the democrats offer you hand outs, and we know that no one can build wealth with hand outs, if so how come niggas still struggling in the project why is the community so filthy, why the majority are paying high rent and no business owners? Until you can answer these questions you are another freeloader who will never be nobody