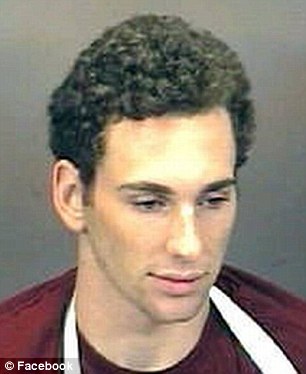 Authorities say Chandler Michael Kania was traveling north in the southbound lanes of Interstate 85 in Hillsborough on the morning July 19 when he drunkenly careened into another car.

Earlier, the college student was charged with driving while impaired, careless and reckless driving and possession of alcohol by a person under the age of 21.

Kania's family has said in a statement that their prayers are with the victims and their families.

On Tuesday, Kania's parents posted his $1million bond to secure his release from jail. The 20-year-old man will remain under house arrest at his home in Asheboro with a monitoring ankle bracelet.

According to State Highway Patrol officials, Kania was drunk when he traveled the wrong way near the Interstate 85 split and Interstate 40 at around 3am July 19 and crashed his Jeep Wrangler into a Suzuki operated by Felicia Harris. Catastrophic impact: Kania was traveling north in the southbound lanes of Interstate 85 in Hillsborough on the morning July 19 when he drunkenly careened into a Suzuki Fiery scene: Witnesses described how both cars were engulfed in a huge fire ball on the highway Bad move: The student's friends told police they tried to stop him from getting behind the wheel of his Jeep Wrangler after a night of drinking, but he knocked down one of them and drove off

Passing motorists who witnessed the crash and called 911 recounted how both vehicles became engulfed in a massive fireball.

'There’s a big car accident with a car traveling on the other side of the road. They smashed into each other and it blew up the car,' one witness told an Orange County emergency dispatcher, according to reporting by WNCN.

Kania suffered a broken ankle, broken foot and a broken arm in the crash. He was brought into the courtroom for his bond hearing in a wheelchair.

A rising college junior, Kania is a board member with a mentoring program on campus, and is a popular member of Sigma Phi Epsilon fraternity, reported the station WRAL.

In 2013, Kania graduated from Asheboro High School, where he was student body president, played soccer and tennis, and swam for his school.

Kania’s attorney, Roger Smith Jr, on Monday asked a judge to lower his client's bond amount to $250,000 but his request was denied after prosecutors argued that the 20-year-old was a potential flight risk Golden boy: Kania graduated in 2013 from Asheboro High School, where he was student body president, played soccer and tennis, and swam for his school Harris (left), her granddaughter (right) and McGee were returning from an annual memorial service celebrating the life of Derlene's mother when they were killed

If convicted of all the charges against him, the 20-year-old man could face up to 65 years in prison.

‘He had his whole life ahead of him, but he chose to drive drunk,’ Ms McGee told WRAL in a phone interview.

The woman explained that her eldest sister, Harris and the two girls, ages 6 and 9, were driving home from an annual memorial service in Virginia for McGee's mother when the crash happened.

The women had in their car an urn containing the ashes of Darlene and Connie’s mother. The family are now hoping to recover some of the cremains from the charred Suzuki.

A search warrant revealed that Kania allegedly used a fake ID card indicting that he was of legal drinking age to order alcoholic beverages the night of the crash at two local establishments, a French restaurant and a popular UNC bar.

The two Chapel Hill hotspots, La Residence restaurant and He's Not Here bar, are now being investigated and could have their permits suspended. Incapacitated: Kania suffered a broken ankle, and broken foot and a broken arm in the crash. He was brought into the courtroom for his bond hearing in a wheelchair

A roommate told officers that Kania had been going to the restaurant regularly, using a driver’s license belonging to an older Sigma Phi Epsilon fraternity brother, according to Alcohol Law Enforcement warrants.

Friends told police they had tried to prevent Kania from getting behind the wheel after their alcohol-fueled outing July 18, but the 20-year-old knocked one of them to the ground and drove off.

Comment by Bren on August 3, 2015 at 8:21am
His family posted a million dollar bond next you'll hear he's out of the country. Their good at getting their love ones out when in trouble. Sad Story!!

As Elsa said, our lives mean nothing to them, please ppl stick together out there.....

Comment by Robert on July 30, 2015 at 1:06am
Cool let everything settle down let him get out.
let everything be forgotten, then one day when when he at a fraternity party walk up behind him and put a bullet in his head.. Case close justice serve

Our lives value nothing to these people, I wonder if the table was turned if my black brother would be put on bail.