Tyler, the Creator Gay Rumors: Is He Dating Anyone?

Tyler the Creator performs during Coachella on April 15, 2017.

Tyler, the Creator has hinted at the fact that he may have come out as gay or bisexual on his new album Scum F**k Flower Boy. The album leaked over the weekend, and fans have been quick to point out Tyler’s lyrics on the song “I Ain’t Got Time!” In one of his verses, he raps “Next line will have them like ‘woah’ / I been kissing white boys since 2004.”

Tyler is known for his exaggerated personality, often times saying things for shock value, but many believe this admission to be a truthful one. If it is fact true, is Tyler dating anyone? Does he have a boyfriend or a girlfriend? Tyler The Creator has come out the closet and confirms that he is gay on his new album Scum F**k Flower Boy.

The album was somehow leaked online on Sunday night and some of the lyrics are raising some eyebrows. The album release date is set for July 21st. It’s either Tyler The Creator is a marketing genius or he is trolling hip hop fans. On the single “I Ain’t Got Time” featured on the album, Tyler raps about kissing white boys since 2004, and on another song “Garden Shed” he raps about the struggles of being in the closet.

“Them feelings I was guardin’, heavy on my mind / All my friends lost, they couldn’t read the signs / I didn’t wanna talk and tell ’em my location / And they ain’t wanna walk / Truth is, since a youth kid, thought it was a phase / Thought it’d be like the Frank; poof, gone, but, it’s still goin’ on,” Tyler The Creator raps on the single “Garden Shed.”

Tyler The Creator is known to spit controversial lyrics on his songs, but some folks on Twitter are saying that this shouldn’t come as a surprise. “Nobody cares that tyler the creator is gay, all he dated was white girls that look like white boys anyways,” one fan wrote on Twitter, while another fan added, “Everyone’s like “Tyler the creator is gay omg whaaaaat” like he hasn’t said he was already like six times before.” Some fans even questioned what took the Odd Future rapper so long to come out and whether or not this is a mere publicity stunt to sell records. “I’m not surprised Tyler The Creator is Bi/Gay I’m just wondering why it took him so damn long to come out the closet when we all knew lowkey,” Kiddie wrote.

The album which is officially titled Flower Boy is currently available on iTunes for pre-order. Frank Ocean is rumored to be on the guest list.

The “Yonkers” rapper, 26, has been linked to a few different women over the years. According to OFWGKTA’s Reddit, he reportedly dated model Milan Bertone for a brief time in 2011, and she even appeared in the music video for the single “She.” In 2016, Tyler was rumored to be in a relationship with Kendall Jenner, as he joked with her during a concert at Coachella and the two were later seen going on a date at the Cheesecake Factory.

Both parties quickly shot the rumors down, however. “Apparently we’re dating,” she tweeted, tagging the rapper. He replied, “NOT POSSIBLE, WE’RE BOTH GAY.” Check out the original tweet below.

The tweet now takes on a different connotation with the recent evidence that Tyler has given on the new album. Another set of lyrics that have turned heads are on the song “Garden Shed,” where Tyler discusses having to hide his feelings of love in the past: “That was real love I was in, ain’t no reason to pretend / All my friends was lost / They couldn’t read the sings / I didn’t wanna talk / I tell ’em my location and they ain’t want to walk.”

Tyler has a complicated history with homosexuality in the media, having been chastised for promoting homophobia in his music  (he used the word fa***t 213 times on his debut album). Conversely, he has also been vocal in his support of the LGBTQ community, wearing Gay Pride shirts during his concerts and supporting close friend Frank Oceanwhen he came out as bisexual in 2012.

While there’s been confirmation on who Tyler is referring to in his new lyrics, fans speculating about the identity of the purported lover on sites like Genius and KanyeToThe have identified someone named Wyatt as the most likely candidate.

On the interlude “Sometimes…” a radio DJ asks for any requests, and a mystery man asks for “the one about me.” Tyler then launches into the love song “See You Again,” which he says is dedicated to someone with “rose to the cheeks” and “dirt-colored eyes.” Many are claiming that Wyatt is the mystery man who makes the request.

In addition to this interlude, fans have pointed out that the rapper has posted several pictures on social media with Wyatt, including the post of them below with the caption “Wasn’t Planned.” 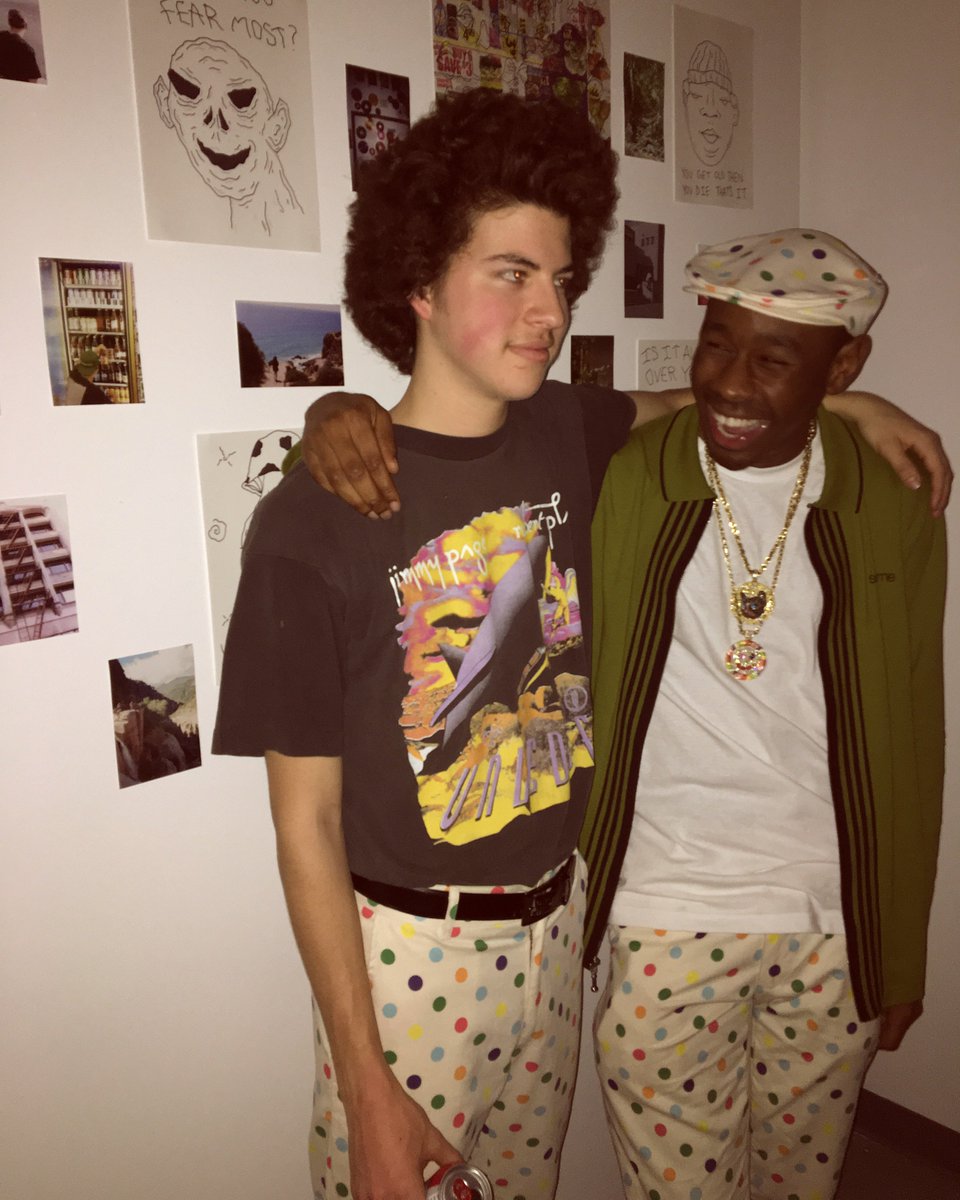 In December 2016, Tyler posted a handmade card that read “Prom,” with what appears to be drawings of himself and Wyatt. In addition to these posts, users have claimed that Wyatt’s birthday is July 21st, which also happens to be the official release date for Scum F**k Flower Boy. You can read the theory in more detail here. 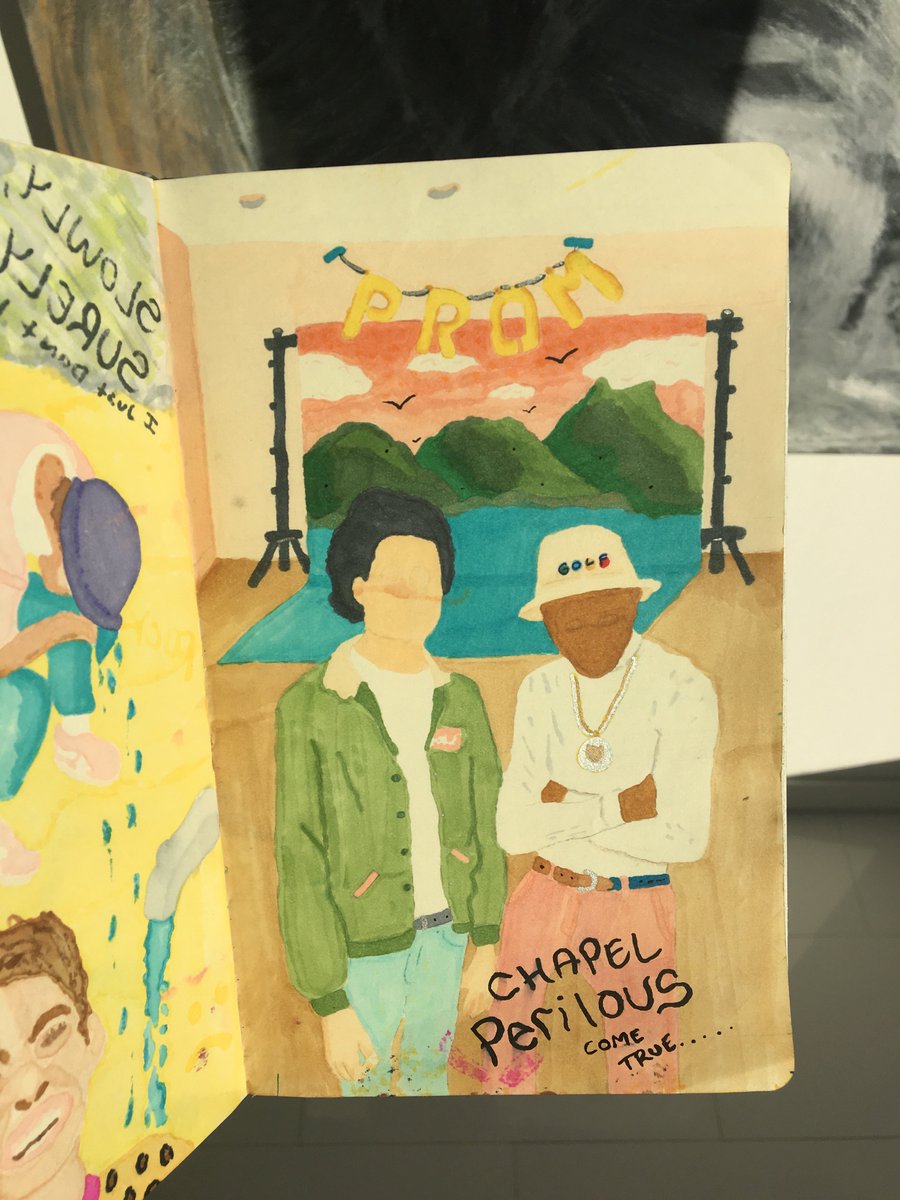 Until Tyler says otherwise, however, he is officially enjoying his single status.