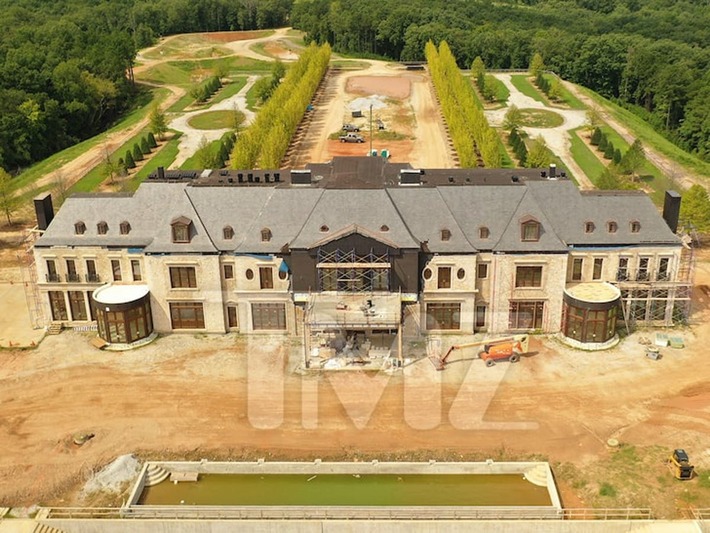 It was just the other day that we learned that Tyler Perry had been declared a billionaire. Now, we’ve learned that’s he’s not only building a super huge mansion/estate, but it will also have a landing strip.

Here are the PICS and VIDEO of the 35,000-square-foot mansion he’s building on 1,200 acres near Atlanta. In the photo below are 2 structures. The much bigger one is no doubt the main house and as you can see, it’s looking like it’s close to being finished.

They’re building an enormous lap pool, as well as a grand entrance to the property. Also, check out the smaller structure that appears to already be completed.

And, Tyler may no longer have a use for a commercial airport, because it looks like he’s creating his own runway!

We’re thinking the smaller structure may actually be a hanger … possibly for his private jet. It’s only fitting, since Forbes acknowledged Tyler now has billionaire status.

As TMZ also notes, the entire estate is tucked away in the woods near the ATL and just far enough away for peace and privacy. Keep in mind that Perry has been designing and building it for several years now. Plans included turning some of the land into an organic farm with horses and other animals.

Oh yeah, if you’re wondering, the Tyler Perry Studios are also nearby

Check out video of the property above and below.

Comment by mr1stroke on September 7, 2020 at 10:31pm
vaughn mitchell he is owning his own business but what do you have other than waiting for another stimulus check, without government hand outs niggers like you wouldnt survive, you project monkey, slave niggers like you dont matter on here unless you ride my dick, you waste n*****

Comment by mr1stroke on September 7, 2020 at 10:27pm
Sufferahsmusic Media Prod you are a dumb coconut immigrant, no one cares what you have to say you dont matter

Comment by vaughn mitchell on September 7, 2020 at 10:07pm
That's because Mr 1 dick is a racist white man pretending to be black. Always talking about black people not building wealth and helping out other blacks and owning their own business , now you have a billionaire , who got his the hard way, put blacks in his film who was not getting film work, own his own film and production company and is hating because he build a mega mansion.

Comment by Sufferahsmusic Media Prod on September 7, 2020 at 3:29am
What a stupid comment .....your a foolish person

Comment by mr1stroke on September 6, 2020 at 10:08pm
After that white people.will buy it and own it, they will not allow a black man in America to have too much power