Two-time Super Bowl Champion Malcolm Jenkins is speaking out about the importance of raising awareness of social issues, even on the field

Malcolm Jenkins Net Worth: 5 Fast Facts You Need to Know

Two-time Super Bowl Champion Malcolm Jenkins is speaking out about the importance of raising awareness of social issues, even on the field. He sat down with NBC’s Lester Holt for an exclusive interview about football players national anthem protests. Last season, rather than take a knee, Jenkins raised a fist during the playing of the anthem.

When asked if athletes are the right people to address social issues, Jenkins replied, “Who better?” He emphasized that athletes are accustomed to training and working with people from different backgrounds, and know how to handle conflict. He also pointed out that the NFL has addressed domestic violence issues and wears pink to support breast cancer. But once players started “talking about black issues, and issues of race, now all of a sudden” critics argued that players should just focus on playing the game. 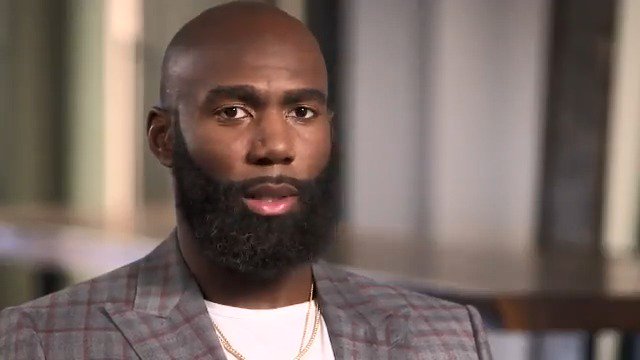 In an interview with @LesterHoltNBC, Philadelphia Eagles player Malcolm Jenkins discusses the social issues players have brought onto the field. https://nbcnews.to/2LonpeX

Throughout his career, Jenkins has used his notoriety and financial means to try and uplift his communities and address issues facing younger generations.

Here’s what you need to know.

1. Jenkins Started His Own Foundation to Benefit Youth in Underserved Communities

Instagram/bellameauxMorrisa Jenkins has been her husbands biggest fan since he was drafted by the Saints in 2009.

The Malcolm Jenkins Foundationwas created in 2010 as a non-profit public charity. The NFL star wrote on the organization’s website that he feels an obligation to set an example for the younger generations about the importance of choosing a positive path in life. “I have a responsibility to our youth to be a positive role model. I’m fortunate to be in a position to be looked up to by many kids and young adults and even admired by those older than me.”

The Foundation has several programs working to benefit young people. There is special emphasis in four locations: Piscataway, New Jersey, where Jenkins grew up; Columbus, Ohio, where Jenkins was a star on the Ohio State University football team; New Orleans, where he began his professional football career; and of course his current home of Philadelphia.

One of the regular programs is dedicated to helping teens go to college. “Malcolm Jenkins Scholars” has granted 72 scholarships worth more than $100,000 to help college students. The site boasts the fact that 48 percent of those recipients were the first members of their families to attend a university.

“Get Ready Fest” is a partnership with “Feed the Children” and other local sponsors to provide food to impoverished families. Families are given a week’s worth of food and wellness products. At these events, families are also given access to health services such as blood pressure and cholesterol screenings, dental checkups and eye care.

The event that young athletes most look forward to every year is the Next Level Football Camp in Piscataway, New Jersey. Jenkins personally leads the camp and invites other NFL superstars to participate in leading skill sessions. The camp got started in 2012. Hundreds of boys and girls ages 7 to 17 attend the free event every year.

2. Jenkins Chose to Do Community Service Rather Than Visit the White House Following the Eagles Super Bowl Victory 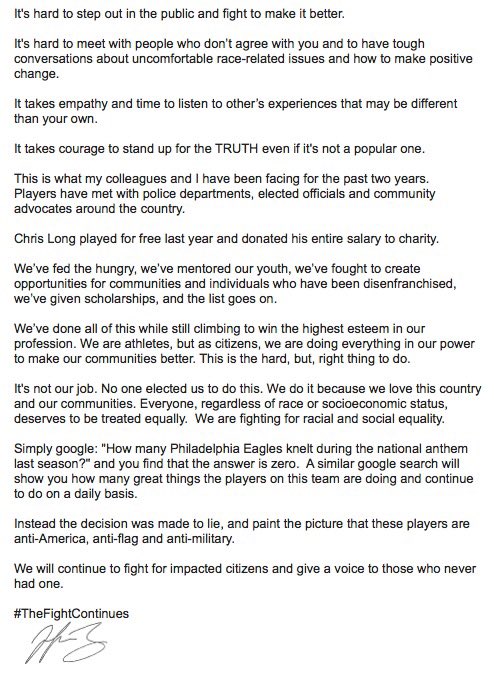 National championships teams are typically invited to visit the White House. The Philadelphia Eagles were no exception after winning the Super Bowl. But after few players expressed interest in going, President Trump disinvited the team.

Jenkins issued a lengthy statement in response, which you can read in its entirety in the tweet above. He slammed the president for attempting to portray NFL athletes as anti-American and anti-military. He pointed out that no Eagles players ever took a knee during the 2017 season.

On the day the team was scheduled to visit the White House, Jenkins chose to perform community service instead. He visited the Maya Angelou Public Charter School. He met with students and spent time in the kitchen showing the kids how to make healthy salads.

3. Malcolm Jenkins Signed a Lucrative 5-Year Deal With the Philadelphia Eagles in 2016

Malcolm Jenkins has been playing for the Philadelphia Eagles since the 2014 season. He initially signed a free agent contract with the team. When that agreement came to an end in 2016, the Eagles offered him a lucrative extension in order to keep him from leaving.

Jenkins was given a new 5-year contract worth more than $35 million. It included a $7.5 million signing bonus. For the upcoming season, Jenkins is set to earn an estimated $8.6 million. This deal ranks Jenkins as the fourth highest-paid member of the team, behind Fletcher Cox, Nick Foles, and Jason Peters.

Jenkins was drafted in the first round in 2009, 14th overall, to the Saint Orleans Saints. He played with them for five years before joining the Eagles. In his 9 seasons with the NFL, Jenkins has earned more than $42.5 million. That includes nearly $13 million in signing bonuses, nearly $6 million in option bonuses, $750,000 workout bonus and $18.7 million in salary.

4. Jenkins Is Both a Football Star and a Fashionista

Jenkins first made a name for himself in the fashion world with his decision to wear bow ties while in New Orleans. He said at the time that he enjoyed wearing something to make him stand out. In 2017, he turned his love of fashion into a business, when he opened his own clothing store in Philadelphia called Damari Savile. Damari is his middle name. The second half of the name comes from Savile Row, a famous street in London that caters to men’s fashion.

On its website, the store highlights its custom designs. “Damari Savile provides made to measure and ready to wear suiting to millennials looking for more of a stylish fit in their wardrobe.”

Jenkins says he met business parter and store co-owner Jay Amin in January 2017 in Philadelphia. They both struggled to find suits and other designs they liked, so quickly decided to just create their own look. The store at Washington Square Park opened just four months later. The store is open to the general public on Tuesday, Wednesday, Friday and Saturday. The rest of the week is reserved for appointments.

Malcolm Jenkins lives with his wife and daughter in a 5,000-square-foot home in Philadelphia. The house is reportedly worth more than $3.5 million. The interior of the home is the work of designer Christina Henck. According to the Henck Design website, the company selected all of the flooring, tile, bathroom, vanities, rugs and furniture in the Jenkins house.

The house includes Mardi Gras-themed colors to commemorate Jenkins’ time playing in New Orleans. There is also a library and a basement “hang out” room where Jenkins keeps all of his old jerseys and sports memorabilia.

But the most unique part of the home, which Jenkins definitely designed himself, is the zombie room. Yes, a zombie room. The football star showed off the room during an interview with Bleacher Report in 2016. Jenkins laughed as he described being excited at the idea of a zombie apocalypse. He has tools including knives, compasses, wrenches and weapons ready just in case.

He also did a fun video for the Philadelphia Eagles youtube page, with tips of how to survive the zombie takeover. Jenkins showed off all the clothing, snacks, radios and physical tools people would need to get by.