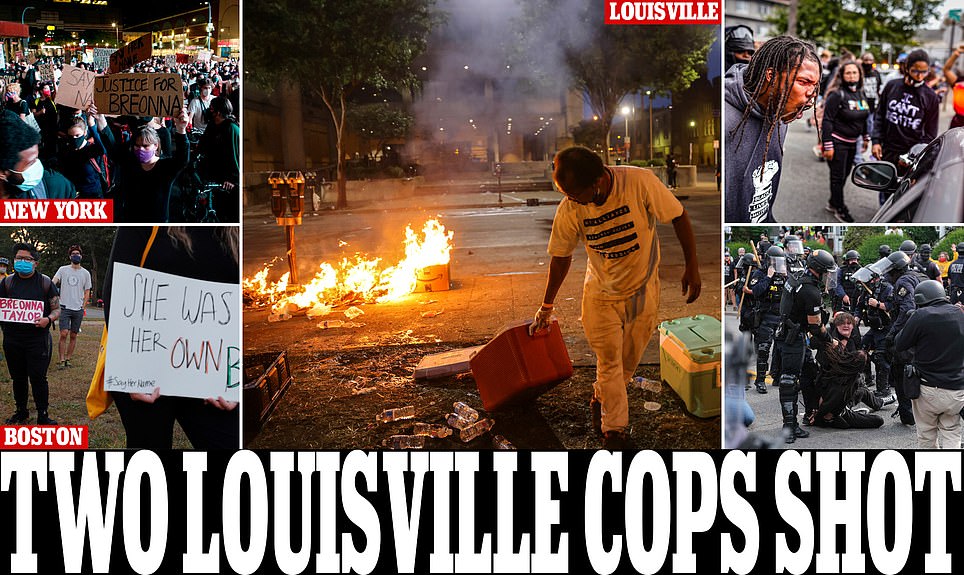 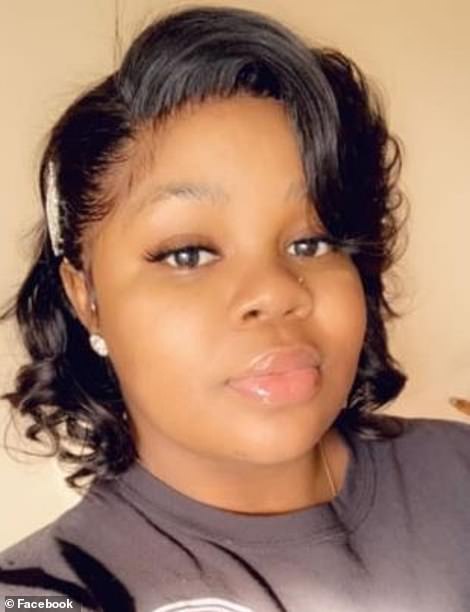 Two Louisville cops have been shot as police face off with protesters after a Kentucky grand jury cleared three officers of charges for the shooting death of Breonna Taylor.

The Louisville Metro Police Department confirmed a shooting at Brooks Street and Broadway at about 8.30pm Wednesday and said the officers were rushed to an area hospital. Additional details about the officers' conditions or the circumstances of the shooting were not immediately available. Police did not confirm whether the incidents were related to protests.

Bystander video showed a group of people walking down a street when gunfire erupted several hundred yards away where several police cars were parked with their lights flashing.

At least 14 shots rang out at the person holding the camera started running away from the source.

Louisville was thrown into turmoil after a grand jury handed down its decision indict just one of the officers involved in Taylor's killing, Brett Hankison, on charges of 'wanton endangerment' for shooting into the homes of the 26-year-old EMT's neighbors when they executed a no-knock warrant on March 13.

Crowds gathered at Jefferson Square Park for the announcement erupted in anger, disgust and mourning and immediately began marching through the streets of Louisville, which is currently under a 72-hour curfew with a state of emergency designation in effect.

Tensions quickly boiled over as protesters confronted lines of police officers who fired pepper balls and used wooden batons to drive them back.

Multiple people were thrown to the ground and detained by cops clad in riot gear as Kentucky Gov Andy Beshear approved a 'limited' deployment of 500 National Guard members in anticipation of nighttime violence.

Meanwhile members of far-right groups including the Boogaloo Boys and the Proud Boys were seen fully armed as they made their way downtown to challenge Taylor protesters.

Other cities across the US are also bracing for a night of unrest as smaller protests formed in New York City, Washington DC, Atlanta, Philadelphia and Chicago. 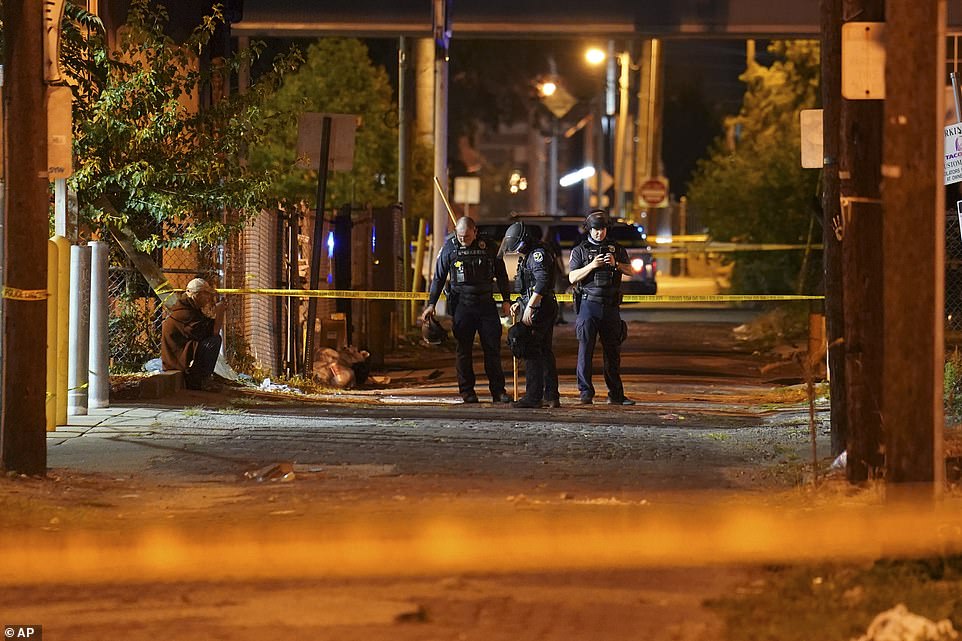 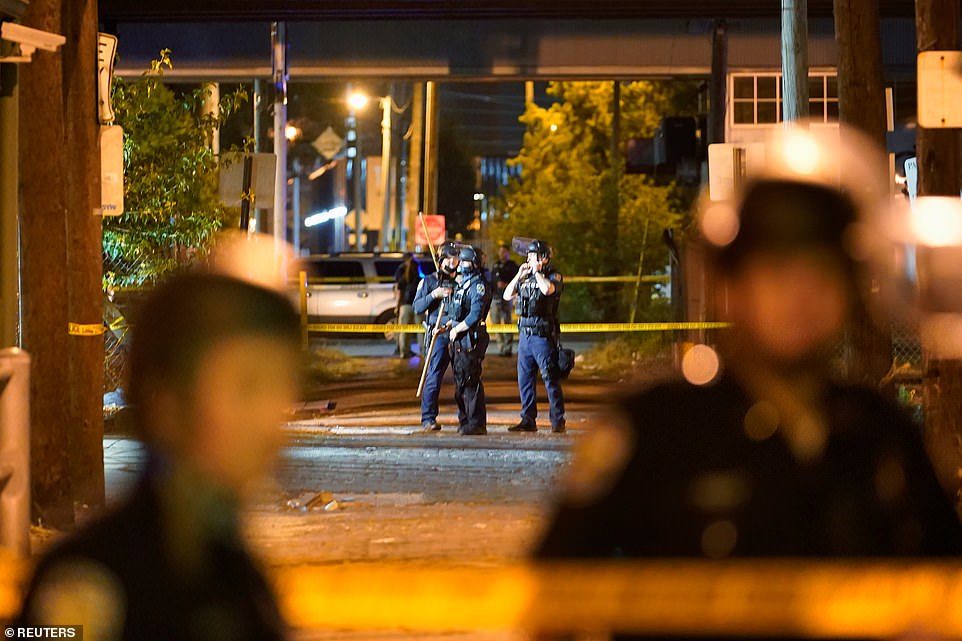 The Louisville Metro Police Department confirmed a shooting at Brooks Street and Broadway at about 8.30pm Wednesday and said the officers were rushed to an area hospital 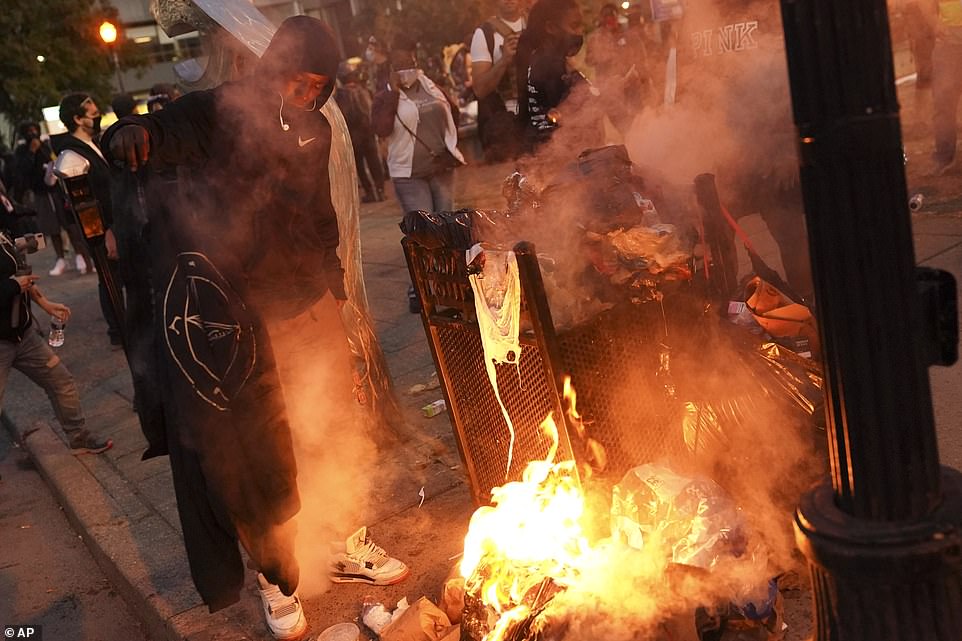 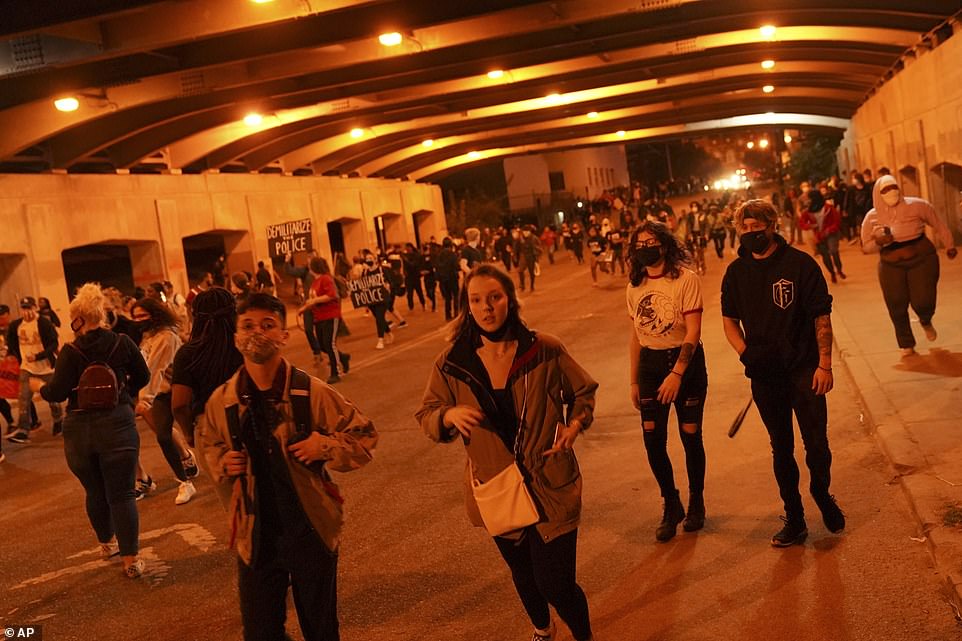 stephen myers you slave n*****, you love your massa, tell every one why you will vote for biden, tell us about him,

every time he gets a chance he disrespect you niggers but you love your massa lol, tell me one of his policies that favor the black community during his 47 years, tell every one the main reason why you will vote for biden, you have a democratic congress, you niggers vote democrat, when you march why do you march and who exactly are you begging for your rights, what have those democrats done for the past 50 years since you niggers been marching? you come on here run with the mouth but you cannot inform any one about anything, you are an empty sewer with no brain, you are an old fool who dont read,  you repeat anything you hear on the media without researching, you are like those annoying dogs who keep on barking and every one wish you were dead, if you dont have any information you dont count, you mean nothing and you know it, you cant help your self you are an old transgender you come on here just to ride my dick, you f***** n*****, if only you knew you were a slave you wouldnt be complaining sit your porch monkey ass down and shut up

'Black Power' fart is high off his on fumes he admits from his azz and comes out his mouth, a Jim Jones maggot   brain dead idiot, cops and white supremacist have been murdering Blacks since they arrived here, just that your white supremacist Trump has made them more open and bold, now go serve your massa some hot tea and rub his nuts.

And for the intelligent negros who have so much to say and have been running their mouths of how black they are, tall is cheap you are not that strong and so do your black leaders like Al Sharpton who was in the back when Breonna Taylor's family was accepting that check, I am sure You’ve maybe heard the phrase “past is prologue”? In other words, if you want to predict the future, just look into the past. Maybe you’ve heard the phrase “history repeats itself” - particularly true if people pay no attention to history in the first place, wait until the democrats lose that election they will be pissed and pay you no attention, they already showing more compassion to illegal immigrants more than they do to black people in this country and those illegal immigrants are not African descent, they got you niggers so conditioned every time you talk about black issues they got you saying black and brown, now who are the brown people, do the brown people ever cared about you, do they fight for your issues? It means your issues alone do not matter, they have to include others like the jews and gays, you niggers are dumb as f*** if you cant see that and you wonder why they are watching you die like dogs by racist cops they hire, by the way in case you didnt know they hire those cops to keep the fear in the community, to keep you under control, otherwise explain why they are not out there killing, jews, whites and gays, only in your community

You can come here and run with the mouth talking that Trump or republican s***, your problem is bigger than that, your problems were there before Trump and will be there after him, this is the America you accepted, you don't vote Republican but always blaming them, if thats the case whats the purpose of those you vote, what is their roles, if your vote count and your life depends on it how come they sit there and watch you die? If they can change gun laws each time there is a mass shooting in the white community, dont you fell stupid each time you bring on that argument, arent you mufuckers supposed to be intelligent, because of your poor decisions innocent people are paying the price, thank God i was bless enough to move out that dump

I have already predicted the result when the family accepted the money, it was hush money to talk away and let white people do what they do, this is the only weapon white people has to fight back when they dont want to kill they give you money and if you stand for nothing that piece of paper will impress you, niggers always fall for it because they are always desperate for that.

But in the middle of it where are your democrat congress, where are your black police chiefs, Mayors, judges, and leaders, where are your celebrities grouping telling you who to vote for, where is joe biden i dont see him coming out and call for a formal investigation, i dont see them trying to change or pass any laws, where is your Cnn other than them making money off that story? When you make poor decisions and stay loyal to those who dont give a damn about you, nothing will be done until you stand against Those who does not value your existence