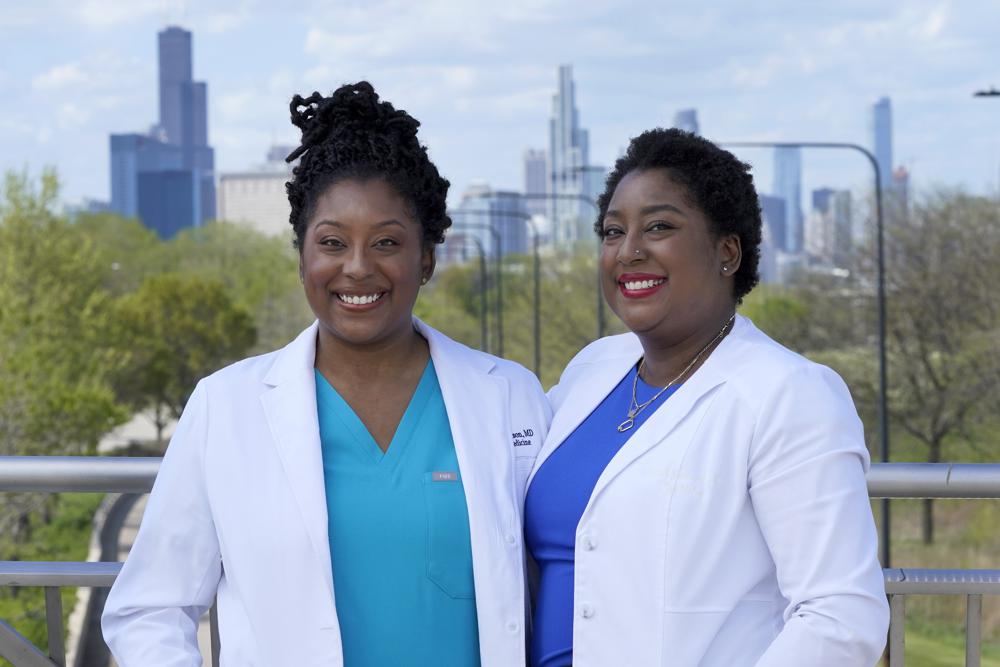 The inseparable sisters always stood out — identical twins from Twinsburg Ohio, whip-smart students from the side of town with unpaved streets and no sidewalks, excluded from the gifted track because they were Black.

Their friends were white and a classmate’s comment still stings: “’I don’t even think of you as Black.’ I said, ‘’Thank you.’ And I felt pride,” Brittani James recalls, shuddering.

“I believed we were special. I believed other people in our neighborhood weren’t as good as us,” she said.

The twins were indeed special — they won free rides to the Ivy League, earned medical degrees at prestigious universities, and have thrived in a profession where they are vastly outnumbered by virtue of their skin color.

But their mission now is to dismantle the entrenched bigotry behind that classmate’s backhanded remark.

At 33, James and her twin, Brandi Jackson, have taken on the medical establishment in pioneering work to eliminate racism in medicine.

“We’re teaching how to see it and how to undo it,” Jackson said.

James, an internal medicine doctor, and Jackson, a psychiatrist, have developed anti-racist coursework used in two Chicago medical schools. They’ve co-founded the Institute for Antiracism in Medicine, where physicians can earn continuing medical education credit for taking classes on how their profession has made Black patients sicker.

They’ve even hatched a plan to create black coats for doctors. That’s not as radical as it might sound — black coats were the tradition in the 19th century.

Their latest achievement? Helping lead a charge against the American Medical Association and the influential research journal it publishes.

The twins are riding a wave and they got there by ’’learning to breathe underwater.” That’s how Jackson describes adapting to “this constant oppressive pressure” of racism.

“I remember being young and being told in school that I can’t be smart, because of where I’m from, being told your hair is ugly,” she said. “You learn to live with the kind of pain that comes just for being. Just for walking down the street. You can’t name it when you’re that young. It does something to your psyche.’’

It can break you, and Jackson and James have had fragile moments of self-doubt. But the pandemic year has fueled their resolve. They say the relentless toll on people of color from the coronavirus and video-documented police violence has laid bare the damage caused by structural racism.

’’It is literally killing us,” James said.

In recent steps that critics labeled mostly symbolic, the AMA has made an effort to come to grips with its racial history. The group excluded Black doctors from its ranks for over 100 years, and even today, just 5% of all U.S. physicians are Black.

Within the past few years, the nation’s largest doctors’ group hired Dr. Aletha Maybank as its first chief health equity officer and declared racism a public health threat. In February, it removed a statue displayed at its Chicago headquarters of Dr. Nathan Davis, AMA’s founder, who promoted racist policies.

But later that month, a podcast hosted by the AMA’s flagship medical journal caused a stir. The tweet promoting the podcast read, ’’No physician is racist, so how can there be structural racism in health?”

Dr. Brittani James, left, and her twin sister Dr. Brandi Jackson stand for a portrait in the Bronzeville neighborhood of Chicago, Sunday, May 2, 2021. The identical twin doctors who have fought bigotry all their lives have a lofty new mission: dismantling racism in medicine. (AP Photo/Charles Rex Arbogast)

The sisters’ institute started a petition in response, demanding that the journal diversify its mostly white editorial staff and ensure that medical research relating to race and racism gets published. The effort has garnered more than 8,800 signatures so far.

The doctors will be looking to hear how AMA plans to address their concerns at a second meeting, but James says the AMA’s anti-racism plan — in the works long before the sisters’ activism — makes her optimistic. In an 83-page document released Tuesday, AMA vowed to dismantle structural racism inside its own ranks and within the U.S. medical establishment with steps that include diversifying its own staff and collaborating with outside groups.

The group reached out to James and other physicians to discuss the plan — a hopeful sign, she said.

“We still have to hold their feet to the fire,” she said.

Part of the problem is doctors’ deeply embedded identity as healers and “good people,” Jackson said. “It’s hard when you’re indoctrinated in that culture to stop and say, ‘Are we really doing good?’’’

A racial imbalance in medical leadership perpetuates the problem, James said — those making decisions and policies don’t look like the populations they serve.

James treats patients at a clinic on Chicago’s South Side and teaches at the University of Illinois-Chicago. Jackson has taught at Rush Medical College and is the behavioral health director at a Chicago health network that treats LGBTQ and other underserved patients. 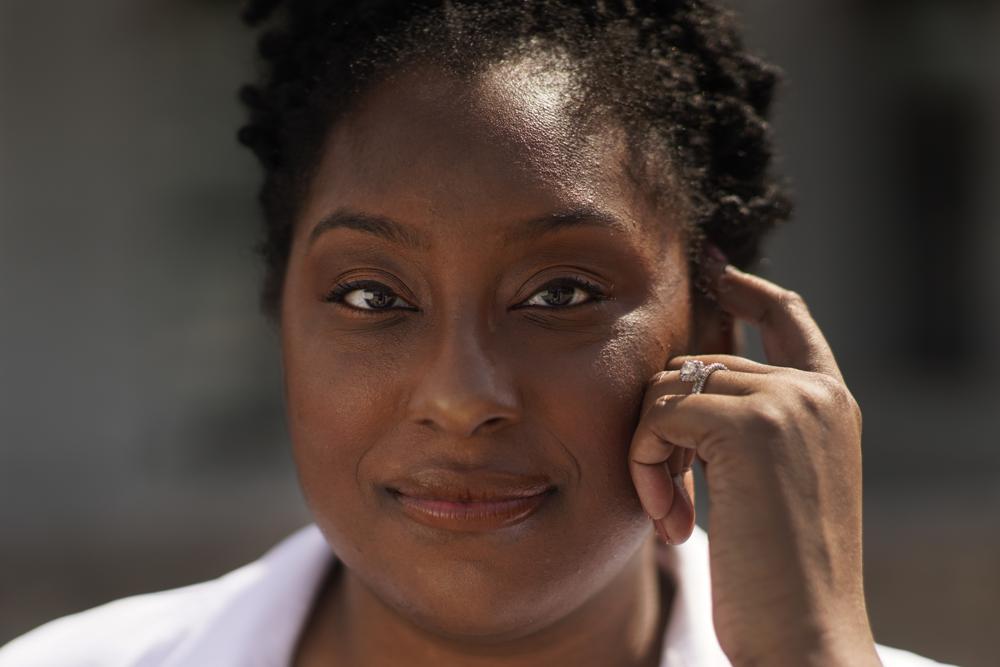 Dr. Brittani James poses for a portrait in the Bronzeville neighborhood of Chicago, Sunday, May 2, 2021. (AP Photo/Charles Rex Arbogast)

Working with students, medical residents and colleagues, they strive to highlight the harm caused by the disproven idea that there are biological differences in Black people that contribute to health disparities.

–The longstanding myth that Black people somehow have a higher tolerance for pain, perpetuated during slavery times, has often led to undertreatment.

–Medical school instruction on skin diseases typically shows how they appear on white skin, not Black or brown, leading to missed diagnoses.

–In psychiatry, impulsive, disruptive behavior in white children is often labeled attention deficit disorder, a diagnosis that often guarantees classroom accommodations. Identical behavior in Black kids is more often labeled conduct disorder, leading to detention rather than accommodations “unless they have a really sharp parent who advocates the hell out of it,” Jackson said.

The sisters’ message isn’t new, said Dr. David Ansell, a physician at Rush who has worked with their institute. But their timing is uncanny — coming at the convergence of a deadly pandemic that has highlighted racial health inequities, a rise in white supremacism, and civil unrest over police brutality.

At such a moment, he said, the sisters can make a difference.

“We emptied it and would go under rocks in search of potato bugs, worms. We gave each their own compartments … then would examine them and took notes when they appeared sluggish.” Once, they sprinkled salt on a snail to dry it out when it seemed “too moist. He just curled up and died. I still feel bad about the snail,’’ Jackson said. 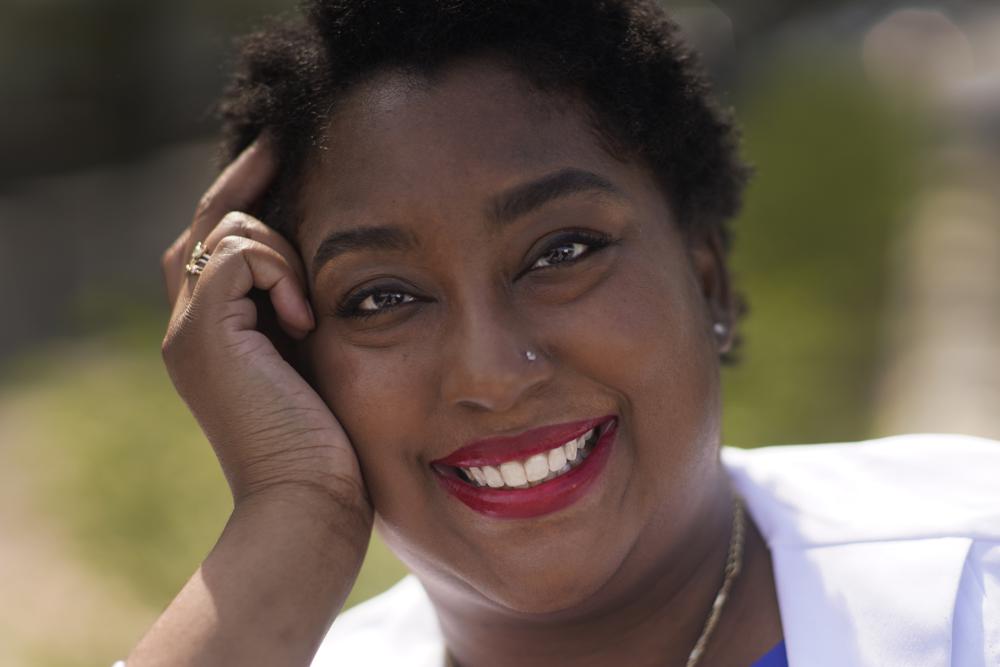 Dr. Brandi Jackson poses for a portrait in the Bronzeville neighborhood of Chicago, Sunday, May 2, 2021. (AP Photo/Charles Rex Arbogast)

Their parents were hard-working and supportive, but the twins didn’t tell them when they were accepted at Cornell University, knowing the cost was prohibitive. They broke the news when they landed full scholarships.

It was during a college summer program that James for the first time saw a Black doctor. She stared. “It was like a unicorn,” but it planted a seed.

They separated for medical school — Northwestern for Jackson, University of Michigan for James. Surrounded by rich white kids and professors, James struggled.

“It was this huge feeling like I don’t belong here. None of the professors look like you, what you’re learning about people like you is racist and you’re getting tested on it.”

She left school for a year and sank into a deep depression until getting involved in volunteer community health work. Colleagues there encouraged her to go back. In low moments, James says she draws on the strength of ancestors.

Now, she and her sister serve as mentors to other medical students from nontraditional backgrounds.

Medical resident Shan Siddiqi is a Canadian Muslim whose parents are from Pakistan. He works under James’ guidance at a clinic where James says “the sickest of the sick” go for treatment, patients with chronic illnesses worsened by poverty, stress from living in violent neighborhoods and now COVID-19. Siddiqi said he’s impressed by her compassion, taking the time to treat them as humans and helping them overcome challenges to getting medication or specialty care.

Jordan Cisneros, a third-year medical student who Jackson has mentored at Rush Medical College, says her guidance has helped him get through a tough year. His father died from COVID-19 in January and George Floyd’s televised death last May felt personal.

In a Zoom class last year, Jackson brought up Floyd’s death and broke down crying. “It’s very taboo to cry in medicine,” but Jackson made it seem OK to show emotion and vulnerability, he said.

The sisters are extremely close, often finishing each other’s sentences, but there are differences too.

James is married to a white physician, a guy she thought was a math nerd when they met but is now her partner in battle. She tears up when asked what she wishes for their 1 ½-year-old daughter, Lillian.

“I don’t want her to have to live in a box like I did,” James said. ”I want her to raise her voice so she knows it’s OK to be everything that she is, especially when the world is trying so hard to make Black and brown girls small and not heard.”

Jackson is single, loves to cook in her spare time and thinks like a scientist in the kitchen, marveling at how a humble carrot can transform into something sublime with just a little butter and brown sugar.

James wears her passion on her sleeve and pours her soul into Twitter, calling out racism every time she sees it. Jackson says she has no appetite for Twitter wars and “tries to be the one who is grounding. I want to come at it with a loving, calm energy,” she said.

“It moves me to tears that all of my ancestor Black women who never got to see the day … that they were in vogue and their voice was listened to,” she said. ”It is Black women’s lives that survive and keep surviving.”