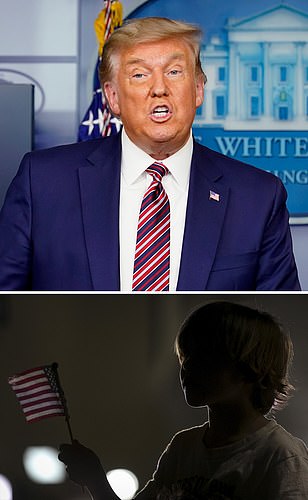 President Trump is reportedly considering signing an executive order ending birthright citizenship before he leaves the Oval Office.
On Friday, various sources told The Hill that members of the Trump Administration have been discussing the issue with increasing frequency. They are hoping to push the President into taking action before Joe Biden is sworn in on  January 20.
Under current law, all babies born in United States are automatically granted citizenship, regardless of whether or not their parents are American. An executive order signed by President Trump would likely put an end to such legal protections.
The Trump Administrations declined to comment specifically on the issue when approached by The Hill.
Instead, White House Deputy Press Secretary Judd Deere issued a statement saying: 'Since taking office, President Trump has never shied away from using his lawful executive authority to advance bold policies and fulfill the promises he made to the American people.'

President Trump is considering signing an executive order ending birthright citizenship before he leaves the Oval Office, The Hill reports

Some constitutional scholars say any executive order Trump signs on the issue would not hold up under the law. They argue that birthright citizenship is protected under the 14th Amendment.

However, the courts have not definitively ruled on the issue.

A legal challenge would almost certainly follow any executive order signed by the President.

According to The Hill: 'The Department of Justice has been consulted about a possible birthright citizenship order given that it would have deal with the legal implications of any new policy.'

The President has previously discussed ending birthright citizenship, claiming that he can indeed enforce the action without an amendment.

'It was always told to me that you needed a constitutional amendment. Guess what? You don't,' Trump told Axios back in 2018.

Trump told that publication at the time that he had been talking about it with his White House counsel.

'It's in the process. It'll happen, with an executive order,' he stated.

WHAT IS BIRTHRIGHT CITIZENSHIP?

Since the adoption of the Fourteenth Amendment back in 1868, citizenship of people born in the United States has been controlled by its Citizenship Clause.

Thus, all babies born in the United States are automatically granted American citizenship, regardless of the legal status of their parents.

Critics of birthright citizenship oppose the fact that illegal immigrants and visitors to the United States can give birth to children who automatically have American citizenship rights.

Such children are sometimes offensively referred to as 'anchor babies'.

A 2016 report in The Los Angeles Times described the phenomenon of 'birth tourism from China'. According to the report, many wealthy Chinese citizens fly into the United States to give birth. This means that their children automatically become US citizens, making the process of applying to top American colleges easier in the future.

'There is nothing in the law that makes it illegal for pregnant women to enter the United States,' a spokeswoman for U.S. Immigration and Customs Enforcement told the paper at the time.

Children born in Australia, New Zealand and all countries across Europe do not automatically attain citizenship.

The President has previously discussed ending birthright citizenship, claiming that he can indeed enforce the action without an amendment

Despite having years to sign executive orders and create policy, the Trump Administration appears to be in a mad dash to push through bold initiatives before Joe Biden is sworn in as the nation's 46th President.

According to The Hill, the Administration wants to pass  additional reforms to the H-1B visa program and new measures targeting China.

The Justice Department says it is scheduling the executions of Alfred Bourgeois for December 11, Cory Johnson for January 14, and Dustin Higgs for January 15.

The last of those executions will take place less than a week before Biden takes office.

The President-elect has vowed to end federal executions and incentivize states to also stop capital punishment.

According to The Hill: 'The Department of Justice has been consulted about a possible birthright citizenship order given that it would have deal with the legal implications of any new policy.'

Sufferahsmusic Media Prod you are an immigrant n*****, a porch monkey with no name who dont exist, we never had a conversation and never will, how can you spoke to me already, and if you did what the f*** your n***** ass is going to do, you dumb n***** sit your starving 3rd world country n***** ass down and shut the f*** up, you ignorant n*****

Comment by Sufferahsmusic Media Prod on November 22, 2020 at 5:38pm
Mr1stroke i spoke to you allready about calling people on this site niggers ...what the hell is your malfunction....why do you plague is with your emotional immaturity ....man respect others regardless of your stance on any subject....you lessen yourself when you begin to try and lessen others ....cmon man ....cut that stuff out ....

Well I guess he gon' have to ship his half immigrant son out the country too!

vaughn mitchell i dont have too dream i had a perfect 4 years that set the future straight, you on the other hand was one of the niggers dancing on the street like it was the end of slavery when Biden won, lol this is so sad you niggers just dont care looking like slaves, now the question is if you can spend 4 years complaining about Trump what will you get out of Biden, remember we have 4 years to evaluate how will the situation get better for niggers, Trump is a white agenda, niggers dont have no purpose they are happy to help white people with their agenda like Malcolm X says you put the democrats in the white house so they can be comfortable while they forgot about you until the next 4 years, as long as massa is happy the niggers are happy no matter how miserable they are, so let see how much Biden cares after 85% of you niggers voted for him, this is the moment of Truth of how niggers was meant to he slaves, the sad part when he dont do nothing or just throw you we welfare card niggers will make excuse of why he did not do anything, thats what we call the true slaves, now sit your n***** ass down and lets count how many shooting will take place in the community this weekend, and i am taking bet on the numbers for thanks giving weekend, the only community that enjoys killing each other, every day you niggers stay on the news, niggers love killing each other, find the same group of animals that cannot stand each other, niggers are not human and worse than animals with their hateful behavior, you dumb n*****

Comment by vaughn mitchell on November 21, 2020 at 9:10pm
Oh, well biden will reverse that s***. Lol. Millions of people young and old doctors and lawyers will be affected. It won't happen he will be blocked. Just imagine all those illegal cubans who came to the U.S. when castor took over. Keep dreaming mister 1 dick, orange jumpsuit is waiting for him and his family, trying to right the election in his favor will not happen.

Thats why you will have another president, you have a democratic congress and a senate who is willing to work with him, stop panicking and find solution, otherwise you really dont believe in your vote and the person you votes foe