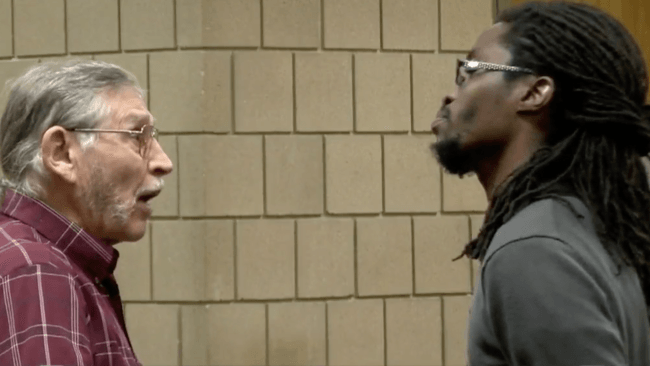 John Franklin McGraw, the 79-year-old man who sucker-punched a black man at a Trump rally, received probation for the incident but is now vowing to help heal the country.
McGraw was captured on video punching Rakeem Jones, but the two hugged it out at the courthouse. Jones had been charged with assault and battery and disorderly conduct as well as communicating threats after he suggested in video after the incident that he wasn’t sorry and that he “might have to kill” Jones if he came back.

But after being given one year of unsupervised probation, McGraw apologized to Jones and said that his attack was not motivated by race but instead was just because he had been caught up in the “political mess.”

Jones accepted McGraw’s apology, and the two hugged and agreed to work together to heal the divided country. The judge who sentenced McGraw said that he was pleased the two had been able to come together to resolve the incident peacefully.

“It just felt good being able to shake his hand…and face him,” Jones said.

Comment by HandsomeMan on December 16, 2016 at 7:46pm
Stupid brother. Only black people that want to make chages to unite with these racist mfers.
You think he meant that? Its all a show like most whites who don't want to get sued or go to jail.
A old ass like him still hate you

Comment by Clay on December 16, 2016 at 6:56pm
Why do people always attribute everything to GOD?

Believe me, GOD had nothing to do with it. The man is probably being sued in Civil Court for damages. and has Criminal Charges pending . He probably felt that a public apology was necessary in his case.

If this incident wasn't publicly televised, his white a$$ would not have apologized because he only saw a ni33a.

GOD wants race relations too be good in the States, but allows us to bomb other countries? So God Bless America, but no one else? Most wars are Economic or Religion driven. They all swear to or affirm on The Bible?????

That's right, The Good Book? $hit the entire Old Testament is horrific, Stories of Rape & Mass Murder..... It's easy to place your had on the book and continue the story.

Until people get away from the Accepted Insanity of Religion and start thinking we're doomed.

Comment by Divine God on December 16, 2016 at 7:19am
F*** that if was some reconciliation going on, I hope he got more than a hug. Okay pay him. After you pay as Donald trump said he would for his supporters. Maybe 100,000 lets hug then. Black people always forgiving until today we still in prisons, unemployed, uneducated, homeless, mentally disturbed but yet we forgave the white man for slavery. He messed up now it's time to make amends. The white nan always taught us about a forgiving Jesus. But he never mentions a just god. That justice is the healing ingredient that leads to forgiveness. That way his old white ass will think twice about assaulting and threatening the life of a black peaceful protester.

Comment by Daniel Jorge on December 15, 2016 at 11:49pm
AlexanderJah(Jesus saves) I'm just making a point,don't you think it's kind of hypocritical for you to express Jesus saves and then you see two human beings different skin color different backgrounds who were in conflict and then the goodness of God enters their hearts to be able to hug each other and seek unity instead of conflict and the only thing you have to express is a yawn,I don't get it what gives with you

Comment by Daniel Jorge on December 15, 2016 at 11:41pm
That's how you unite a country it's starts with us the citizens