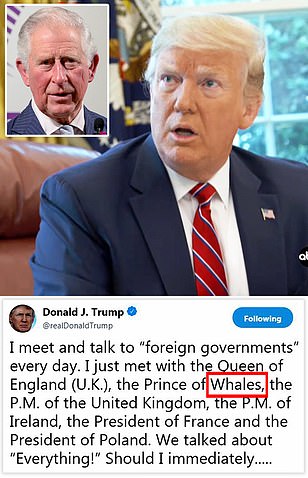 President Trump doubled down on his extraordinary statement that he would accept campaign dirt from a foreign power – saying he can't be expected to call the FBI after meeting with figures like the 'Prince of Whales' and the 'Queen of England.'

Trump's defense of his position – and his whale of a typo for the title of Prince Charles, the Prince of Wales, whom he dined with last week – came as leading Democrats blasted his comments and renewed calls to begin his impeachment.
'I meet and talk to "foreign governments" every day,' Trump wrote on Twitter Thursday morning.
'I just met with the Queen of England (U.K.), the Prince of Whales, the P.M. of the United Kingdom, the P.M. of Ireland, the President of France and the President of Poland. We talked about 'Everything!'

He was referring to his state visit to the UK earlier this month, which included meetings with Queen Elizabeth II and her son Prince Charles. The British monarch is the head of state, not the head of government, and the royal family are by convention excluded from taking part in politics. 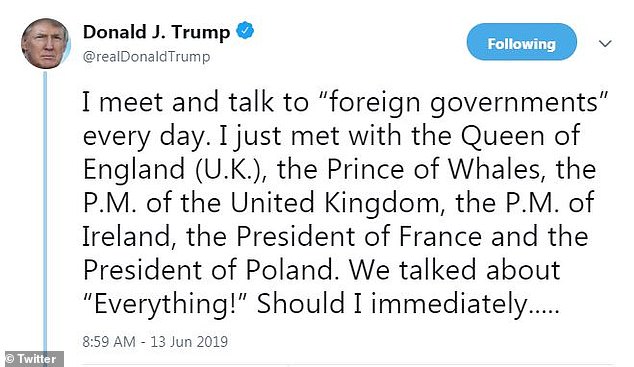 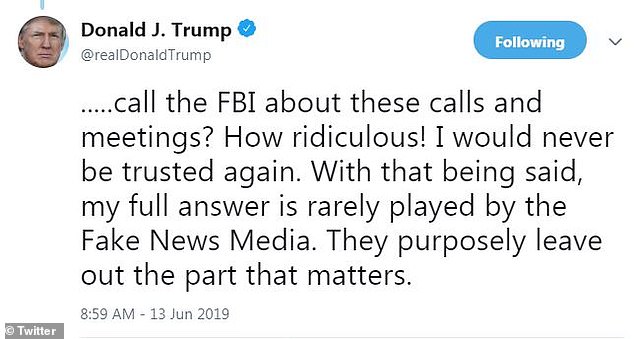 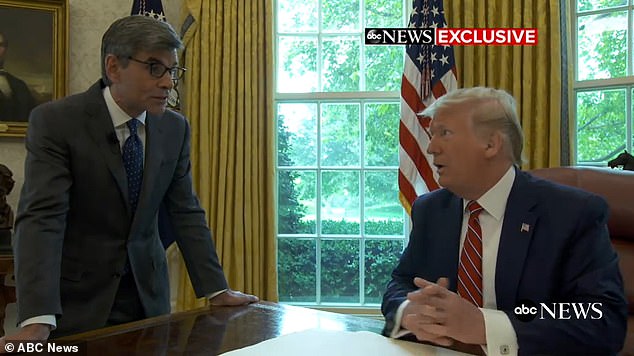 President Donald Trump has said that if foreign governments offered his campaign damaging information against his 2020 rivals during the upcoming presidential race, he would 'take it in' before, if at all, going to federal authorities, in an exclusive interview with ABC News Chief Anchor George Stephanopolous

He continued: 'Should I immediately...call the FBI about these calls and meetings? How ridiculous! I would never be trusted again. With that being said, my full answer is rarely played by the Fake News Media. They purposely leave out the part that matters,' Trump added.

ABC aired multiple quotes by Trump explaining his position. Interviewer George Stephanopoulos, who spent time with Trump over two days this week and traveled aboard Air Force One, brought up offers of foreign dirt on a day Donald Trump Jr. was testifying before the Senate Intelligence Committee.

Trump Jr. famously accepted a meeting in Trump Tower in 2016 after being offered dirt on rival Hillary Clinton described as being from the Russian government.

In a hypothetical in the interview, Trump brought up a scenario of Norway offering information on a campaign rival.

'I think you might want to listen, there isn't anything wrong with listening. If somebody called from a country, Norway, [and said] 'we have information on your opponent,' I think I'd want to hear it.'

His Thursday tweets also mentioned Emmanuel Macron, the French president, whom he held talks with after commemorating the 75th anniversary of D-Day, Poland's president Andrzej Duda, with whom he met on Wednesday in the Oval Office, and Ireland's prime minister, Led Vardkar, whom he met when landing in Ireland where he stayed between visiting Britain and France. 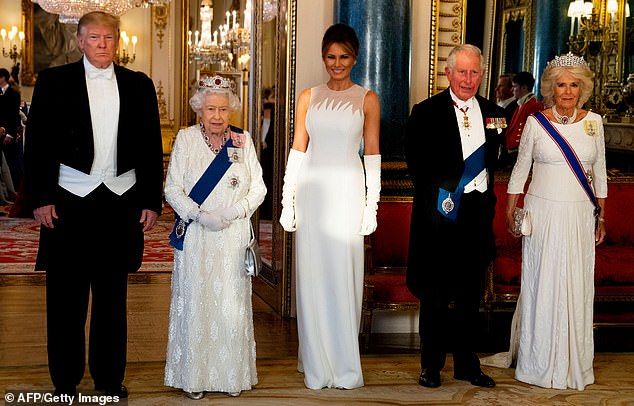 Do you want to know a secret? Trump claims that because he met Queen Elizabeth II, and the heir to the UK throne, Prince Charles - whom he called the Prince of Whales - he can't be expected to call the FBI if a foreign government offered him dirt

Under 11 CFR § 110.20 (b), campaign finance law prohibits a foreign national from contributing or donating 'money or other thing of value,' or even expressly or impliedly promising to do so,  'in connection with any Federal, State, or local election.'

That makes it punishable for the foreign actor to do so.

The same laws also makes it illegal to accept such a contribution or donation, which could arguably be considered 'just listening,' as President Donald Trump put it, to information about political opponents obtained by a foreign actor.

Subsection (h)(1) of the law states,  'No person shall knowingly provide substantial assistance in the... acceptance, or receipt of a contribution or donation prohibited by paragraphs (b) through (d), and (g) of this section.'

Whether 'just listening' constitutes 'susbtantial assistance' in accepting  information about political opponents  (e.g., a 'thing of value') would be the major issue to prove in a campaign finance violation case related to accepting that kind of data from a foreign actor.pecial Counsel Robert Mueller, in his report, examined whether it was a violation of campaign finance laws for top Trump campaign aides to have accepted information, since it could constitute something of value.

But prosecutors concluded the officials who took the meeting may not have been fully cognizant of campaign finance laws at the time.

Democrats slammed Trump for his statement to ABC.

House Speaker Nancy Pelosi used her weekly press conference on Thursday morning to say: 'What the president said last night shows once again, over and over again ,that he doesn't know the difference between right and wrong. And that's probably the nicest thing I can say about him.'

Wrote Democratic Sen. Elizabeth Warren of Massachusetts: 'A foreign government attacked our 2016 elections to support Trump, Trump welcomed that help, and Trump obstructed the investigation.' (In his report, Mueller declined to make a determination about whether Trump obstructed justice.)'

'Now, he said he'd do it all over again,' she continued. 'It's time to impeach Donald Trump.'

Democratic Texas Rep. Beto O'Rourke tweeted: 'When the President of the United States openly welcomes foreign help to win an election, he threatens the very core of our democracy. If we are to secure justice and ensure this never happens again, we must impeach him.'

The tweets about meeting foreign leaders were followed by another tirade, directed at Democrats but apparently confused or misguided.

However, Trump appears to have conflated Warner with Schiff, misconstruing key details of the incident he meant to describe. Trump also said Schiff should have called the FBI when he got pranked by a pair of Russian comedians when in fact Schiff can be heard on tape saying he would call the FBI.

Wrote Trump: 'When Senator @MarkWarner spoke at length, and in great detail, about extremely negative information on me, with a talented entertainer purporting to be a Russian Operative, did he immediately call the FBI? NO, in fact he didn't even tell the Senate Intelligence Committee of...which he is a member.

'When @RepAdamSchiff took calls from another person, also very successfully purporting to be a Russian Operative, did he call the FBI, or even think to call the FBI? NO!''

'The fact is that the phony Witch Hunt is a giant scam where Democrats ....and other really bad people, SPIED ON MY CAMPAIGN! They even had an 'insurance policy' just in case Crooked Hillary Clinton and the Democrats lost their race for the Presidency! This is the biggest & worst political scandal in the history of the United States of America. Sad!'

Warner's press secretary, Rachel Cohen, was flummoxed. 'this never happened. literally, i have NO idea what he's talking about,' she wrote in response to Trump's tweet.

It is possible the president was referring to Warner's texts with a lobbyist for a Russian oligarch. Those conversations, as reported by Fox News, were part of an effort to get in touch with ex-British intelligence officer Christopher Steele. However the lobbyist is a real person, not an entertainer purporting to be a Russian operative. 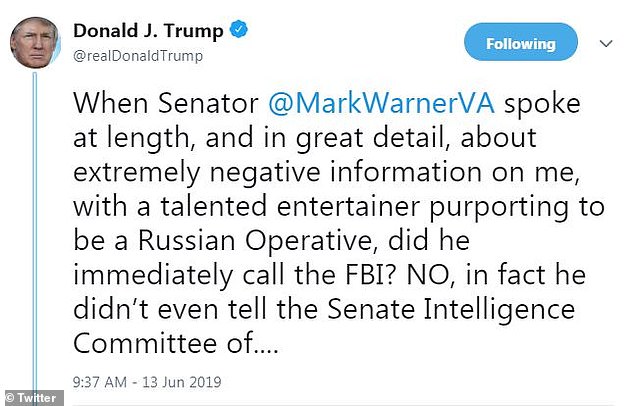 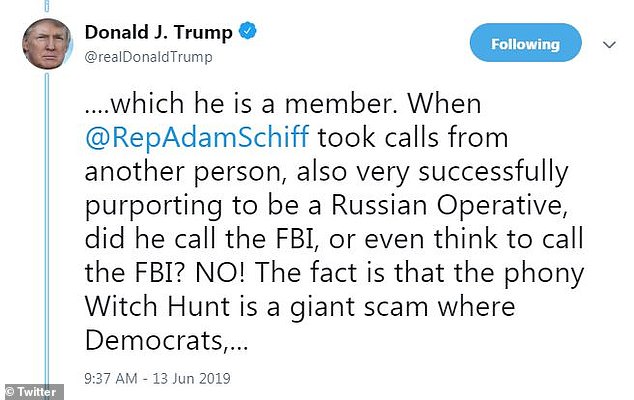 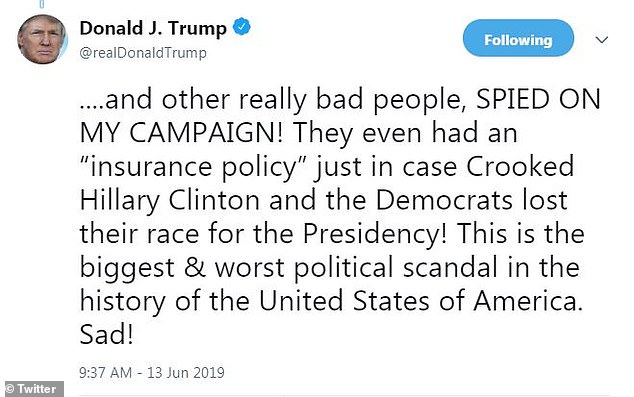 And there's more: Trump attacked Mark Warner with a claim he had been spoofed by Russian comedians which did not happen. Warner said he thinks Trump mixed him up with Adam Schiff, who was hoaxed, but who told the two comedians that he was going to call the FBI 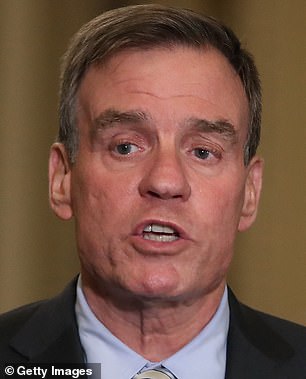 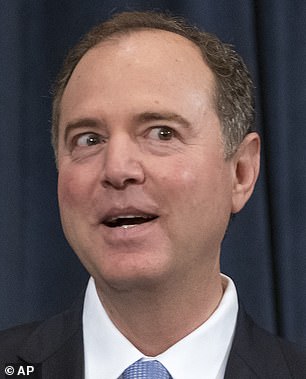 Confused? Trump launched a broadside at Mark Warner, minority leader of the Senate Intel Committee (left), with a claim he had taken a call from a Russian 'entertainer' and not called the FBI. In fact it was Adam Schiff, chairman of the House Intel Committee (right) who was spoofed by two Russian comedians, but ended the call saying he was going to call the FBI

In 2018, Schiff, the chair of the House Intelligence Committee, was the victim of a prank by two Russian comedians who go by 'Vovan' and 'Lexus' and were pretending to be Andriy Parubiy, the speaker of the Ukrainian Parliament.

They told Schiff they had naked photos of Trump from his made-up affair with a Ukrainian model.

However in the recording, despite falling for the prank, Schiff says he will do precisely what Trump says he did not do – think about calling the FBI.

Says Schiff in the prank call:  'I'll be in touch with the FBI about this. And we'll make arrangements with your staff. I think it probably would be best to provide these materials both to our committee and to the FBI.'

Former UN Ambassador Nikki Haley also fell for a prank by the pair, when she engaged in a conversation about the fictional country of Binomo.

DailyMail.com reached out to the White House for comment and further explanation on the tweets about Warner and Schiff.

Warner blasted Trump's comments about accepting oppo from a foreign power and not calling the FBI.

'The last time this President pulled a "Russia, if you’re listening," Russian operatives sent phishing emails to his opponents the very same day. This isn’t a gaffe or a difference of opinion.

'The President has given Russia the green light to interfere in the 2020 election,' Warner wrote, referencing Trump's request during the campaign that Russia get thousands of deleted Clinton emails. Trump later said he was joking.

Warner also planned to call up legislation requiring campaigns to alert the FBI when a foreign power offers information. 'If the President and his campaign can’t be trusted to do the right thing and report foreign interference to the FBI, then we need to make it a legal requirement by passing my bill, the FIRE Act,' he wrote.

He told a CNN reporter in the Capitol he had 'no idea' what Trump was talking about, but said Trump may have mixed him up with Schiff on the Russian prank incident.

Warner said 'of course' he would contact the FBI if offered campaign dirt on an opponent.