Trinidad PM Will Not Help Caribbean Neighbors Without Benefit to TNT... 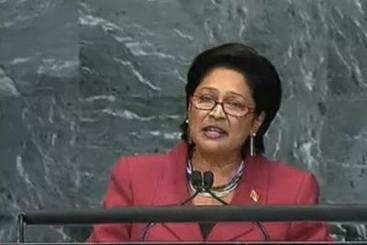 No help for Caricom countries hit by Tropical Storm Tomas without benefits to Trinidad and Tobago.

This was made clear by Prime Minister Kamla Persad-Bissessar yesterday.

She said Trinidad and Tobago stands ready to assist its Caricom neighbours but she stipulated that any aid would only come after discussions with her Cabinet colleagues as well as the Opposition Leader, and must in some measure benefit the country.

Speaking at a news conference at the Diplomatic Centre in St Ann's, Persad-Bissessar said she has received a call from the Prime Minister of St Vincent while Foreign Affairs Minister Suruj Rambachan had been in contact with his counterparts in Barbados and St Lucia, territories in the region which have been hit by Tomas.

She said she intended to speak to her Cabinet colleagues as well as the Leader of the Opposition to see what relief this country could give to the other Caribbean islands.

"We will have to look at ways in which we would be able to assist. But you would recall my comments earlier this year, when I said there must some way in which Trinidad and Tobago would also benefit. So if we are giving assistance with housing for example, and that is one of the areas that we (Prime Minister of St Vincent and myself ) spoke about, ... then we may be able to use Trinidad and Tobago builders and companies, so that whatever money or assistance is given, redounds back in some measure to the people of Trinidad and Tobago," she said.

She said this is why she intends to approach her Cabinet colleagues as well as the Leader of the Opposition with this proposal—to marry the benefit to Trinidad and Tobago while giving assistance to those islands that have been very badly hit.

The Manning government had been severely criticised by Trinidad and Tobago nationals for giving assistance to Caribbean countries especially in non-emergency situations.

Persad-Bissessar said it was St Vincent Prime Minister Dr Ralph Gonsalves who reported to her that that island was devastated. He revealed that over 600 homes were completely destroyed, infrastructure damaged and the agricultural sector ravaged, she said. "The Prime Minister indicated that not a plantain or banana tree was standing," Persad-Bissessar added.

She said Barbados and St Lucia were doing a needs assessment and Gonsalves had indicated that he would do something in writing when that country conducts its needs assessment.

She said the Government had already mobilised through the Minister of Local Government, two containers of foodstuff, and it would make a decision where to send it but "certainly to St Vincent".

Noting that the news suggested that the storm was heading to Haiti, she said it was tragic since Haiti was pounded in so many ways. She said if this is the case, Government would have to consider assistance to Haiti again. "But it would do nothing unless the Cabinet discusses it and the Leader of the Opposition is consulted," she stressed.

Comment by Trini George on November 11, 2010 at 9:42am
Unfortunately she didn't tell us the basis her behind the decision so that we could truly understand why she had to speak to the cabinet and couldn't make the decision herself. Please don't let her comments give you a bad opinion/impression about all T&T people. People are people, no matter what country they were born in. Being a humanitarian-being considerate of human welfare and social reform-is to be human. Helping shouldn't be looked at as an expense, consider it an alliance-an agreement or friendship between countries, made in order to advance common goals and to secure common interests.

Comment by delroy foster on November 6, 2010 at 12:54pm
i think she is heading in the right direction she is only doing what all other govements do now

Comment by TYECHEA NICHOLS on November 6, 2010 at 2:46am
What are these people in government thinking??? Are they putting price tags on who get to live or survive or die these days??? What ever happen to the common value of life??? If the shoe was on the other foot would you want someone having to think about rescuing you off of a ship ready to sink or would you want someone to save you knowing you have nothing to give in return or once they rescue you, you have to give them the close off you back in order to return the favor??? God granted you life without a second thought and what's needed to know now is, he can take that life at any time!!! We are living in the last days, and life is too short to want to live by greed and personal gain!!! Selfishness isn't needed either!!! How long do you really think it's going to be before you have to stand before god??? When he asks you why didn't you help people in time of need ??? Are you going to say "lord , i was looking for a return". What if he answers you and say " You are going to be judged according to how you've lived and asked for a return on all the chances he had given you on life".How would you feel??? I would give the shirt off of my back if i could, But I'm just one out of many that don't like to see people suffer, why , because it causes pain and none of us deserve to suffer!!! God bless those in need ,Just know that your cries didn't go unheard.

Comment by coryse k. villarouel on November 4, 2010 at 11:51pm
Adding to my statements, it's sad that it's like this in the world now! Helping people is something to be thought of first before acting! :(

Comment by coryse k. villarouel on November 4, 2010 at 11:49pm
WOW harsh words there! But I will say one thing, I do not disagree on the statement of using TNT workers to supply the help. Seems to me this is what the US does isn't it, and no one questions them on that standard. When the US goes into a country to help they they come with their people and military; and come on the US only goes into a country to help if it's of benefit to them! Why do you think they so quickly tried to help Trinidad during the coup! They wanted the oil! Or when they went to Grenada, strategic planning! That way they can set up a military base and be a constant present in that country!

Comment by mr fix on November 4, 2010 at 11:25pm
@ Mo Times Productions unless you're a Indian in Trinidad you're consider as a second class citizen. Trinidad is like the United States racist as hell but don't tell them that they get upset like George Bush the former president says the most disappointed thing that happen to him while he was president is Kanye west remarks as him being racist towards black people not the war in Irag or the Katrina flood which his why Kanye make his remarks.

Comment by J Don on November 4, 2010 at 4:49pm
@ Meleka Bannister and Kennywee u both are right @ Mo'Times Productions u are wrong! in this world anyone can say what they want but there will be consequences. What that woman said is dead wrong and everyone knows it... All now she double up and police at her door, ask me how i know PLEASE!!! and everyone racist in their own way...As i been saying before and now PM Kamla needs to stop with her little power trip because all its doing is affecting Trinidad and Tobago, all this is well bring up hate and everyone getting divided as its happening now, everyone wanted change but look at it i can bet you money you don't like it DO YOU ??

Comment by Mo'Times Productions on November 4, 2010 at 12:50pm
calling people coolies or niggers is racist. then u keep trying to talk about "one caribbean nation?" All i see on this topic is a bunch of illiterate racists backing up one another. Got better things to do...peace.

Comment by Kennywee on November 4, 2010 at 12:34pm
Minney, the thing about it is... I have seen some trinidad products in Barbados, but I can't speak much for them... In SVG, every supermarket you go in, almost everything in there is "made in Trinidad". Trinidad and Tobago is one of the caribbean countries protected by the Common External Tariff (CET). almost everything is being bought from Trinidad, if we want to get anything outside the caribbean, especially if its produced in the caribbean, we have to pay more for it. Hence the reason things are bought from Trinidad. we look out for our caribbean fellowmen, as one caribbean nation, all in the spirit of Caribbean Unity. Why should Ms. Kamla want to make such statements directed at caribbean islands? I would continue to say like PM Gonsalves, WE ARE NO BETTER THAT ANYBODY AND NOBODY IS BETTER THAN US.

Comment by Mo'Times Productions on November 4, 2010 at 12:25pm
HOW CAN ANY PEOPLE / REGION BE UNIFIED WITH RACISTS BELIEFS? YOUR THINKING IS TOO BACKWARD FOR ME. AND BTW, WE ARE NOT AN ATM MACHINE. I HOPE NOW MORE THAN EVER YOU REALISE THIS.