Former international football executive Jack Warner has got another reprieve, as the High Court in Trinidad and Tobago delays its ruling on extradition proceedings brought against him.

High Court Judge James Aboud was expected to deliver his judgment yesterday, but instead adjourned the matter to September following the opening of the new law term. No exact date has been announced.

Warner’s legal battles have been playing out since May 2015 when he made his first court appearance on corruption allegations stemming from his tenure as vice president of FIFA. He is charged with 12 offences relating to racketeering, corruption and money laundering allegedly committed in the United States and Trinidad and Tobago.

He has specifically cited the signing of the Authority to Proceed (ATP) in September 2015 by Attorney General Faris Al-Rawi, which gave the court the green light to begin committal proceedings.
Warner is also contesting the legality of the Extradition (Commonwealth and Foreign Territories) Act and the ­treaty signed between Trinidad and Tobago and the United States.

Warner, a former Government minister maintains the case against him is politically motivated and he has accused the United States of seeking revenge because it lost to Qatar in its bid to host the 2022 World Cup.

In 2016, Justice Aboud dismissed an application by the United States government to intervene in the judicial review lawsuit.

World football’s governing body FIFA has submitted documents to US authorities in an effort to reclaim tens of millions of dollars pocketed illegally by corrupt FIFA members and other football officials.

Among those named are former FIFA vice-president and president of the Confederation of North, Central American and Caribbean Association Football (CONCACAF) Jack Warner of Trinidad and Tobago and his successor Jeffrey Webb of the Cayman Islands.

In its capacity as a “victimized institution”, FIFA yesterday submitted a Request for Restitution to the US Attorney’s Office and the US Probation Office for the Eastern District of New York, claiming damages from 41 former FIFA officials and other football organizations, including Warner, Webb and Chuck Blazer, who have been indicted in the ongoing investigation by the US Department of Justice.

“The convicted defendants abused the positions of trust they held at FIFA and other international football organizations and caused serious and lasting damage to FIFA, its member associations and the football community,” said new FIFA President Gianni Infantino.

“The monies they pocketed belonged to global football and were meant for the development and promotion of the game. FIFA as the world governing body of football wants that money back and we are determined to get it no matter how long it takes.”

FIFA estimates that at least tens of millions of dollars were diverted from the football community illegally through bribery, kickbacks and corrupt schemes carried out by the defendants. This amount is likely to increase as the investigation continues.

The US government has already announced forfeiture amounts that should cover FIFA’s claims for damages.

FIFA is seeking restitution for the money the defendants pocketed to enrich themselves, but also for the salaries, benefits and bonuses that were paid to them during their tenure at FIFA and other football organizations. FIFA is also seeking money from the defendants for the damage their actions caused to FIFA’s brand and reputation, its intellectual property and its business relationships.

“The defendants diverted this money not just from FIFA but from players, coaches and fans worldwide who benefit from the programmes that FIFA runs to develop and promote football. These dollars were meant to build football fields, not mansions and pools; to buy football kits, not jewellery and cars; and to fund youth player and coach development, not to underwrite lavish lifestyles for football and sports marketing executives,” said Infantino.

“When FIFA recovers this money, it will be directed back to its original purpose: for the benefit and development of international football.”

JACK WARNER IS CHALLENGING HIS EXTRADITION TO THE US TO FACE CORRUPTION CHARGES.

Former FIFA Vice President Jack has won the first round in his battle against extradition to the United States to face corruption charges related to his time as a top executive of football’s world governing body.

A High Court in Trinidad has granted him permission to challenge the legality of the extradition proceedings, which means that the process in the magistrate’s court has been put on hold.

Justice James Aboud on Friday granted Warner the leave, based on two of the three grounds argued by his attorneys: that some of the provisions in Trinidad and Tobago’s Extradition Act did not conform with the Extradition Treaty between the twin-island republic and the US, and that he was denied the opportunity to have his attorneys make representation to the Attorney General on the matter.

The judge struck out the third argument that there was apparent bias, as the Attorney General had received legal advice from lawyers representing the US, before signing the Authority to Proceed (ATP), the document required to begin the extradition process. According to Justice Aboud, Warner’s attorneys had provided no evidence that had occurred.

Warner’s legal team, led by Senior Counsel Fyard Hosein, has 14 days – until February 5 – to file their claim. The State will then also have 14 days to respond.

The case has been adjourned until February 26.

Warner is accused of 29 counts of racketeering, wire fraud, money laundering, and bribery. He was among nine FIFA officials and five corporate executives indicted last May for their roles in a long-running scheme to corrupt the sport, which included bribes and kickbacks totaling more than US$150 million that were paid or agreed to be paid to obtain media and marketing rights to international soccer tournaments.

It is alleged that Warner began to leverage his influence and exploit his official positions for personal gain from the early 1990s; accepted a US$10 million bribe from South African officials in return for voting to award them the 2010 World Cup; and bribed officials with envelopes each containing US$40,000 in cash.

An additional 16 high-ranking FIFA officials were charged with racketeering, wire fraud and money laundering conspiracies, among other offences, last month.

Corruption accused Jack Warner has filed an application for judicial review, challenging his extradition to the United States.

Warner, through his attorneys Senior Counsel Fyard Hosein, Rishi Dass, Nyree Alfonso, Sasha Bridgemohansingh and Anil Maraj, is asking the High Court to stay the proceedings and declare the extradition order and the Authority to Proceed (ATP) issued by Attorney General Faris Al-Rawi null and void.

The former FIFA vice-president has denied all allegations, but extradition proceedings have begun before Chief Magistrate Marcia Ayers-Caesar.

However, those proceedings will be stayed pending the outcome of the judicial review application.

The judicial review notes breaches of natural justice in the issuance of the ATP – the document required to begin the extradition process; the failure to provide Warner with a fair hearing; as well as the issue of bias as the Attorney General was advised by lawyers representing the interests of the US in the proceedings in the courts.

As the extradition process for former FIFA vice president and corruption accused Jack Warner remains in limbo, the head of football’s world governing body is under criminal investigation in connection with a TV rights deal that he signed with the Trinidad and Tobago football executive 10 years ago.

And the attorney general subsequently announced that his office had opened criminal proceedings into Blatter, is due to step down from FIFA’s leadership next February, on suspicion of criminal mismanagement or, alternatively, misappropriation.

It is alleged that on September 12, 2005, Blatter signed a contract with the Caribbean Football Union, headed by Warner, which was “unfavorable for FIFA”.

“There is a suspicion that, in the implementation of this agreement, Blatter also violated his fiduciary duties and acted against the interest of FIFA and/or FIFA Marketing & TV AG,” a statement issued by the office of the Swiss attorney general said.

Additionally, Blatter is suspected of a “disloyal payment” of two million Swiss francs (US$2 million) to President of Union of European Football Associations (UEFA) Michel Platini, at the expense of FIFA, which was allegedly made for work performed between January 1999 and June 2002. The payment was made in February 2011.

Blatter, 79, was interrogated today, following a meeting of the FIFA Executive Committee.

The attorney general’s statement said Platini was also heard “as a person asked to provide information”.

The development came as Warner appeared in a magistrate’s court in Trinidad on his extradition matter. The case was adjourned until December 2.

It is alleged that he began to leverage his influence and exploit his official positions for personal gain from the early 1990s; accepted a US$10 million bribe from South African officials in return for voting to award them the 2010 World Cup; and bribed officials with envelopes each containing US$40,000 in cash.

He and 13 other current or former FIFA officials were indicted in May. 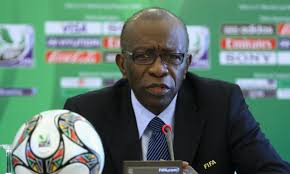 Warner was told of the development in court today.

However, Warner's attorneys are challenging the decision, stating that Al-Rawi missed the September 16 date for signing off on the documents.

They say Warner should be discharged.

However, the state countered that the documents were now signed, making way for the extradition matter to proceed and there should be no discharge.

Deputy Chief Magistrate Mark Wellington asked for time to go through the documents and adjourned until Friday.

Warner is one of 14 people indicted on a series of criminal charges in the United States, including racketeering, fraud, and money laundering, related to their time at FIFA.

Bring his teefin ass here. He ain't got Kamla to throw s*** on now. You're on your on Jackass warner.

Comment by Roots aka TJ What De Ras on September 25, 2015 at 12:34am
He get what he deserves. He almost had me deported from Trinidad

@junjun...to be honest, ....that might be because he was the only one foolish to get caught on video...as well as leaving a paper trail that could circle the planet...lol

Comment by junjun on September 24, 2015 at 4:49pm
Warner is a crook but blatter should also be arrested and charge..why is only the black and brown skin people that is made to be scapegoat? !

Comment by unell mitchell on September 24, 2015 at 4:41pm
Signing it late may have been done on purpose