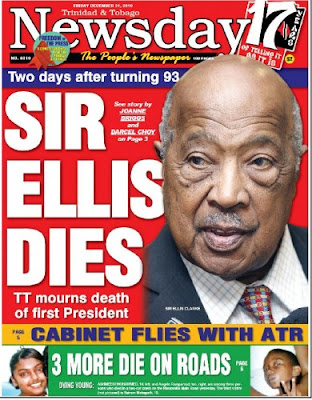 Two days after celebrating his 93rd birthday, the first President of Trinidad and Tobago Sir Ellis Clarke has died.

Sir Ellis passed away peacefully last night at 7.15 at his home at 6 Pine Grove, Fairways, Maraval. He never recovered from the massive stroke which he suffered last month.

On November 24, Sir Ellis was rushed to Westshore Medical Centre in Cocorite for medical treatment for the ailment.

In a statement from the residence last evening, the family said it wished to thank all those who offered prayers and best wishes during his brief illness.

Sir Ellis’ son Peter read the statement to the Newsday team waiting outside the former President’s residence. After the brief statement, Peter returned inside to join the rest of the family.

“I want to thank you for respecting our wishes, I know that you have to do your job. I am going inside with my family,” Peter said as he requested respect for the family’s privacy in their time of grief.

When Newsday arrived, the team noted activity in one of the upstairs rooms. It seemed like persons were preparing Sir Ellis’ body to be taken away. There was a white van parked outside with its rear door open.

At about 9.34 pm, two undertakers came out with the body, wrapped in maroon material.

Sir Ellis, who was one of the main architects of this country’s 1962 Independence Constitution, served as President from 1976 to 1987.

An attorney, he was a sought-after authority on constitutional matters, dispute resolution and diplomatic conflicts and was currently at the forefront of the country’s efforts at constitutional reform.

Sir Ellis, a Roman Catholic, also attended Mass regularly as well as meetings of various committees of which he was a member.

His contemporary, Sir Ulric Cross said he visited him on Wednesday at about 10 am.

“He was not alert. His eyes were closed and he was lying on his left side,” Sir Ulric said. “It was very sad to see him like that since we have known each other since the age of 11.”

Sir Ulric said only Sir Ellis’ son-in-law was present when he visited.

In a previous interview, Sir Ulric regarded his former classmate at St Mary’s College as brilliant. Both also distinguished themselves in the legal profession.

“I used to say 1917 was a vintage year for Trinidad and Tobago,” he said then.

Yesterday, Sir Ulric said he learnt from a nurse that there was not much doctors could have done for the former President again.

“It is a great loss for Trinidad and Tobago,” he said. Funeral arrangements are yet to be announced.

The on-line encyclopedia Wikipedia has already updated its information to indicate that Sir Ellis has died. Sir Ellis was the father of Peter and Margaret Ann. He was also the grandfather of five.

Margaret Ann arrived from Scotland in Trinidad on November 25, the day after Sir Ellis’ stroke. It was customary for Margaret Ann to return home every year to celebrate Sir Ellis’ birthday on December 28, which is observed in the Roman Catholic tradition as Holy Innocents Day. Sir Ellis’s full name was Ellis Emmanuel Innocent Clarke.

Sir Ellis Emmanuel Innocent Clarke, an only child, was born on December 28 1917 into a middle class family from Belmont. He received his high school education at St Mary’s College, where he won an island scholarship in mathematics.


After the attainment of Independence, Ellis Clarke became a foreign diplomat, holding numerous posts between 1962 to 1976, sometimes simultaneously, including Trinidad and Tobago’s Permanent Representative to the United Nations.

He was an ambassador for Trinidad and Tobago to the United States and Mexico. He was also Trinidad and Tobago’s Representative on the Council of the Organisation of American States. He also held the post of Chairman of BWIA from 1968 to 1973. He was appointed Governor-General by Her Majesty the Queen of England in 1972, and assumed duties on 31st January 1973.

Upon proclamation of Republican status on September, 1976, the post of Governor-General became obsolete. Following a meeting of the Electoral College, as provided by the Constitution, Ellis Clarke was elected unopposed as President, becoming the first President of the Republic of Trinidad and Tobago - an office he held until 1987.
Ellis Clarke was involved in the draft Constitution, culminating in his attendance at the Marlborough House Conference from May 28 to June 8, 1962.

He was bestowed the Companion of St Michael and St George (CMG.) in 1960 and made a Knight Bachelor (Kt Bachelor) in 1963. He was one of the first to be awarded this country’s then highest honour, the Trinity Cross (now known as the Order of Trinidad and Tobago) in 1969.

Comment by King George on January 3, 2011 at 11:37am
MAY YOU REST IN PEACE OUR FIRST PRESIDENT YOU LEFT BEHIND A LEGACY AND LIVED A LIFE OF GREAT ACCOMPLISHMENTS MY CONDOLENCES TO YOUR FAMILY AND TO THE ENTIRE COUNTRY OF TNT FOR WE HAVE LOST A GREAT CITIZEN

Comment by Nicky on January 1, 2011 at 10:02am
Good bye Sir Ellis Clarke, the end of another era, As 2010 closed you were the final one to say goodbye to us for this decade. My sympathies go out to his family and close friends and I join the rest of Trinidad & Tobago in the celebration of his life.

Comment by True Trini on December 31, 2010 at 1:18pm
To a President who helped shape the nation into the great one that it is...I offer my deepest condolences to his family and to my country. May he rest in peace!!

Comment by caribbeanrose on December 31, 2010 at 10:28am
My condolences to the People of Trinidad and Tobago and his family. R.I.P

Comment by Ieola A-Y Bakr on December 31, 2010 at 9:18am
My condolences go out 1st to the family,then to the friends, to the nation of Trinidad & Tobago, and finnally to the global community because we have lost a GIANT of genius proportions. We must continue to learn from him and teach the children!
Peace,Love&Harmony on your transition Sir Ellis !

Comment by nickida on December 31, 2010 at 8:14am
RIP Thank you for all that you have done for our country..You were a great man..