Jovenel Moise addresses the media next to his wife Martine after winning the 2016 presidential election, in Port-au-Prince, Haiti.

No sitting Caribbean Community head of state or government had been assassinated since Maurice Bishop in Grenada in 1983, but the brutal killing of Jovenel Moise in Haiti in early July sent shockwaves throughout a region, which has been largely spared such high brutality and drama over the decades.

Moise, 53, was killed when a large group of heavily armed mostly Colombian gunmen stormed his suburban hillside home, shot him and his wife several times before fleeing the scene.

Local police arrested more than a dozen of the gunmen, several of whom have confessed to investigators that Moise had to be killed because he had been compiling a list of local narco traffickers whom he was planning to move against. His palatial south Port Au Prince home was ransacked, and as the New York Times and investigators have reported, important documents including the list are believed to have been taken away from the home during the brutal invasion. The capture of the documents appeared to have been a main motive for the home invasion and the killing, police said.

Caribbean leaders condemned the assassination in strong terms, but appeared to worry more about the pile on effect his killing would have had on the region’s most populous but poorest nation.

After all, the island was hit by a deadly earthquake in August that killed dozens as well as Tropical Storm Grace the very same week of the storm that triggered mudslides and flooding even as the nation and regional mourned Moise’s murder. First Lady Martine Moise was treated for her injuries in Florida, since her return home she has threatened to run in the next presidential elections, sensing that she might be able to tap into lingering political sympathies from her husband’s  murder.

As Haiti struggles to settle down in a tumultuous year for CARICOM, no one can forget and or ignore the devastating effects of a second full year of the COVID-19 pandemic. In 2020, the economies of tourism dependent countries were battered by shuttered air and sea ports and non arriving passengers. Even as the planes and ships have returned in significant numbers in the latter half of 2021, in recent months, the new Omiron variant once again threatens the viability of regional economies.

Hardest hit by the current wave is Trinidad where authorities have decided to shutdown the civil service from this Friday to the first working day in January to ease congestion and to give state workers a chance to get vaccinated. The move came hours after the medical sector reported a record 33 COVID-19 deaths in a single day last weekend and as the twin island republic with Tobago picked up its fifth positive Omicron infection this month.

“We have come to the point where the government will have to take certain actions,” Prime Minister Keith Rowley said as he and labor unions prepared to fight over vaccine mandates. “I have had extensive discussions with the attorney general and his support team in his ministry and his advisers outside and we will now move to a situation of insisting that people in Trinidad and Tobago acknowledge the government’s policy that vaccination is our best way of dealing with the carrier of death and destruction.”

Trinidad apart, Guyana, Barbados, Suriname, The Eastern Caribbean sub grouping and The Bahamas and Jamaica to a lesser extent, all appear to have made strides in controlling the spread and avoiding costly economic shutdowns.

While that was happening, usually well organized Barbados seamlessly and brilliantly transitioned to a republic, installing former Governor General Sandra Mason as its first Black or Brown head of state instead of a white, great grandmother known globally as Queen Elizabeth. Jamaica has since indicated that it will join Barbados, Guyana, Trinidad and Dominica in time for 60th independence celebrations next August. As governments battled with the pandemic, African Union countries stepped in to help the region to procure large amounts of vaccines. Leaders like Gaston Browne of Antigua and Rowley helped to push the US and other western countries to donate large amounts of vaccines even as officials complain about slower than expected uptakes. The Caribbean and Africa also organized and held their first full fledged, formal summit this year with plans for regular meetings and promises to establish air and sea links, spur trade, tourism and other investment opportunities.

Politically, general elections changed governments in The Bahamas, St. Lucia as well as in associate states — the Turks and Caicos Islands and The Cayman Islands. Led by PM Mia Mottley of Barbados, the region’s profile at the climate change summit in Scotland was at its highest this year with dynamic presentations from several leaders.

In April, the region jumped to the assistance of bloc member nation, St. Vincent when the La Soufriere volcano erupted for the first time since 1979, sending hot lava and other releases down hillsides and to communities. Plumes of ash headed eastward to Barbados shutting down air travel and life on the island for a few days. The regional response to St. Vincent encouraged many to heap praise on the integration movement, a point which was not lost on newly minted CARICOM Secretary General, Carla Barnett.

Plumes of ash billow from the La Soufriere volcano on the island of St. Vincent and the Grenadines which started erupting on April 9.UN/Navin Pato Patterson

“In the past year we have experienced time and again the benefit of the community working together to assist each other in responding to natural disasters. We also worked together to procure and share vaccines to present a common front at climate change negotiations and to advocate strongly for our interests in discussions with foreign governments,” she said. 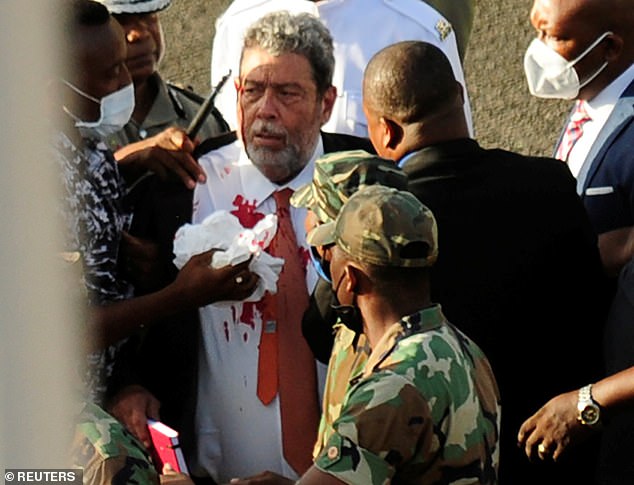 The prime minister of St Vincent and the Grenadines has been hospitalised after getting hit in the head by a stone during a protest against a proposed vaccine mandate.

Ralph Gonsalves, 74, was passing through the crowd outside parliament in Kingstown when the attack happened. He was rushed from the scene after suffering bloody injuries.

The crowd on Thursday was protesting against the government's plans to require most frontline health workers to be vaccinated against coronavirus.

Prime Minister Ralph Gonsalves, 74, was passing through the crowd outside parliament in Kingstown when he got hit by a projectile. Above, Gonsalves is covered in blood following the attack

In a press release, the Office of the Prime Minister of St Vincent and the Grenadines said around 200 demonstrators were 'responding to a call to action from the Leader of the opposition' and 'picketed the Parliament and blocked the entrance to the building.'

'When the crowd prevented the vehicle carrying the Prime Minister from driving through the gate of the Parliament, he alighted the vehicle and attempted to enter on foot.'

'An opposition demonstrator then hurled a projectile at the Prime Minister, which struck him on the head, inches above the temple.

'The Prime Minister, bleeding profusely, was taken to the Milton Caro Memorial Hospital by his security detail, where he was met by his wife.'

In a statement to the parliament, St Vincent's finance minister Camillo Gonsalves said the prime minister has been flown to Barbados for an MRI Thursday night, Trinidad and Tobago Newsday reported.

It has been reported that prime minister Gonsalves is recovering and stayed in the hospital overnight for observation. 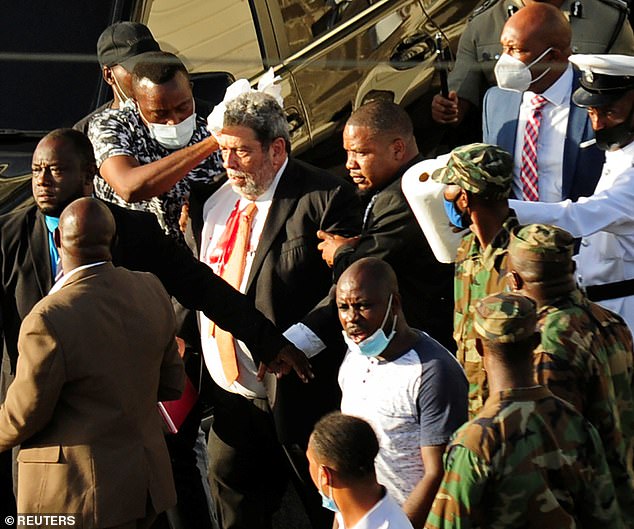 The crowd blocked the Prime Minister's vehicle, forcing him to enter the parliament on foot. Above, Gonsalves is rushed from the scene

St Vincent and the Grenadines, made up of over 32 islands, suffered from 2,298 coronavirus cases and 12 deaths since the pandemic began, according to figures from Johns Hopkins University, reports the BBC.

The figures also show that at least 9% of the population has been fully vaccinated.

The vaccine unrest of Thursday happened nine months after the Prime Minister was elected to serve his fifth term.

His proposed Public Health Amendment Bill was the main reason for the protests, as it required various categories of state employees to be required to take the COVID-19 vaccine in order to work in the frontline.

In order to clear up misinformation surrounding the subject, the Prime Minister had declared on Monday that the bill 'does not involve any legal penalty or punishment on anyone who fails and/or refuses to take the vaccine or test for COVID-19', reported the Jamaica Observer.

Still modern day slaves who serve their masters to this very day, the Islands just serve as drop of points for guns and drugs, got to keep the AmeriKKKan economy going.