Top 20 Jamaican Movies Of All Times 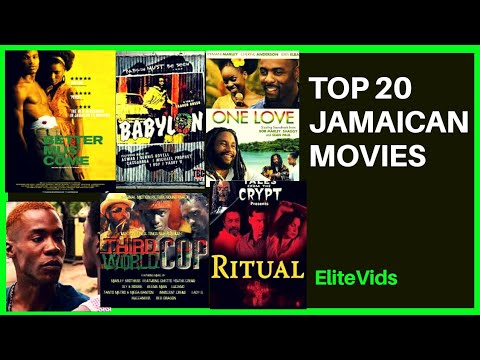 Jamaica has a long and storied history of film, beginning with the first James Bond movie, “Dr. No” until present day movies like “Better Mus Come” and “Ghet A Life.” Picking the Top 20 Jamaican movies was not that hard as there are barely 20 Jamaican movies. Therefore the bottom part of the Top 20 aren’t that good. All of these movies either were filmed in Jamaica or were about Jamaicans living abroad. The best of these movies reflect the struggle, personality, ambitions, music and sense of humor of Jamaica and the Jamaican people the worst reflect the stereotypes and negative images of Jamaicans. Still for some reason, the all seem to feature storied Jamaican actor, Carl Bradshaw.

Bashment tells the story of a group of Jamaicans living in Brooklyn who get caught up in crime and violence. The movies Christian message is thrown off by a bad plot, bad acting and senseless violence.

Rude Boy features Reggae stars Ninja Man and Beenie Man in a movie about Jamaican gangsters in Los Angeles. The film is poorly shot and written and the acting is very uneven as it follows several B-movie gangster film clichés.

Shottas is a Jamaican gangster film that features great music, great cinematography and a great performance by Louie Rankin as the film’s villain, Teddy Bruckshot. While the film may have some great characters and some memorable dialogue it suffers from stereotypes, a poor storyline,and lackluster acting including an over the top performance by Paul Campbell as Mad Max.

Wah Do Dem tells the tale of a white Brooklyn hipster who takes a cruise by himself to Jamaica after his girlfriend breaks up with him and wins up getting stranded without a passport or wallet. The movie’s cinematography captures the beauty of the Jamaican land and people but it is bogged down by a too much time on the cruise ship.

Countryman is a movie that’s point is to discredit accusations of CIA activity in Jamaica with a fictionalized account of a plot to frame the CIA and a political party for bringing in guns. While this movie suffers from a bad plot and lackluster acting, it is saved by a brilliant soundtrack including songs from Toots and the Maytals, Bob Marley, Dennis Brown, Aswad and Lee Scratch Perry.

Children of Babylon is a story of sex and class told through an upper class Jamaican college student, her studies and her sexual relationships. Reggae artist, Bob Andy stars in this movie which is well-meaning, but at times convoluted and confusing.

Klash features Giancarlo Esposito as an American photographer who travels to Jamaica and gets caught up in the world of Dancehall culture and Jamaican gangsterism, when he starts sleeping with the girlfriend of the local crime boss, played by Jasmine Guy. The movie features performances by Shabba Ranks, Ninja Man, Capleton and Mad Cobra and would be ranked higher if not for Jasmine Guy’s horrible Jamaican accent.

13. Tales From The Crypt Presents The Ritual

The ritual is an Obeah based Jamaican horror movie and thriller. Trevor Rhone plays the Obeah man, Julian in this movie showcasing his great acting skills. Jamaican movie fixture Carl Bradshaw plays a servant in this tale of witchcraft and betrayal.

Paul Campbell plays a mad man in this movie who regularly talks to a tree as well as cows and other animals. He is dominated by a German tourist who sexually abuses him and manipulates him into a stealing. Campbell’s humorous and passionate performance as Aloysius the mad man drives the movie.

Although this movie was slightly corny and did not feature any Jamaican actors, Cool Runnings provided a happy and fun look at Jamaican people who could be enjoyed by people of all ages with a story based on the true tale of the Jamaican Bobsled Team that competed in the Olympics.

One Love is a Romeo and Juliet style romance between a Christian gospel singer and a Rastafarian reggae singer. Kymani Marley has a solid performance as the Rasta Kassa, and Cherine Anderson does a great job bringing tenderness to the role of the gospel singer, Serena. Idris Elba showcases his Jamaican accent in one of his first major movie roles as the villain, Aaron.

Filmed in Jamaica, Mighty Quinn stars a young Denzel Washington as Xavier Quinn, a police chief investigating the murder of a millionaire. Island politics, witchcraft and corruption combine to make a thrilling tale of island intrigue.

Another film written by Trevor Rhone, Milk And Honey shows the struggle of the female Jamaican migrant worker as we see the main character Jo leave her son in Jamaica to find work as a maid in Canada.

Better Mus Come tells the story of the 1978 Greenbay Massacre and the political violence and poverty that led to it. Great performances by the leads Nicole Sky Grey and Sheldon Shepard help achieve the director, Storm Saultier’s ambitious goal of creating a moving realistic period piece set in Jamaica.

Babylon Sound tells the story of a group of Jamaicans in England who create their own sound system while struggling with racism and poverty. The movie not only captures the sound system culture, but the harsh racial climate that Caribbean Immigrants faced in England.

Audrey Reid dose and incredible job portraying Marcia a poor street vendor and single mom, giving light to the struggle of Jamaican women, something not seen in most Jamaican movies. As Marcia becomes a Dancehall Queen the vibrant culture of the Dancehall.

Paul Campbell stars as the bad bwoy police officer Capone in this Garrison thriller. The movie focuses on the very real problem of guns being smuggled into Jamaica and the culture of the Don, and Jamaican police corruption . The movie reflected many of the real problems that plague Jamaica. In the movie Capone seeks to avoid capture by the Don, Onnie played by Carl Bradshaw, by donning a wig, a reversal of the real life Don Dudus who sought to avoid the police by wearing a wig.

One of the most hilarious comedies of all times. The movies takes on a satirical look at the Jamaican tourist industry through the eyes of Jamaican hotel workers. Carl Bradshaw has his defining role as the cunning Ringo and Glen Morrison created one of the most funniest memorable characters in Jamaican film as Cyril The Bus Boy.

Rockers is a simple tale of a bicycle gone missing and a drummer’s journey to find it. However it is not the plot that makes Rockers great but the assorted cast of characters and the music. Featuring appearances from Gregory Isaacs, Jacob Miller And Inner Circle, Jack Ruby and Burning Spear, the movie’s brilliants reggae soundtrack drives the film.

This movie made in 1972 remains a classic today. The story based on the history of a Jamaican outlaw named Ivanhoe “Rhygin” Martin. The movie beautifully incorporated reggae into the story by casting reggae musician Jimmy Cliff in the lead and making him a singer. Through great music, sharp passionate acting and cinematography that captured the beautiful people and landscapes Jamaica, Harder They Come is one of those epic movies that both reflected and changed a country and a culture.