Todd Bridges Breaks His Silence in New Memoir: Affair With 'Diff'rent Strokes' Co-Star, abused by his father and Molested By Male Publicist 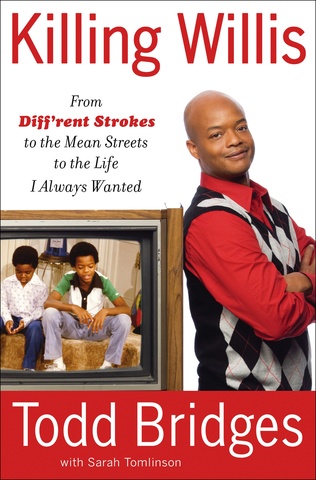 Abused by his father, sodomized by the publicist whom he regarded as a father and fighting back demons of the past-contributed to slide into darkness, embattled former child star Todd Bridges breaks reveals all in his in his new memoir, 'Killing Willis: From the Diff'rent Strokes to the Mean Streets to the Life I Always Wanted.'

"Everyone wants to blame Hollywood when they take a fall,'' Bridges said in an exclusive interview with BV on Books. "When people read my memoir, they will see I'm not blaming Hollywood. I'm taking full responsibility for my actions. Not a lot of people do that. A lot of people spend their lives blaming somebody else. But I will say this: No child should ever endure what I had to go through.''

Bridges was one of the biggest stars of his time, winning roles on 'Roots,' 'Fish,' 'Little House on the Prairie,' 'The Waltons' and others before becoming Willis on 'Diff'rent Strokes,' a sitcom about a wealthy white widower who adopts two black sons, Bridges (Willis) and Gary Coleman (Arnold). It ran from 1978 to 1986. Dana Plato, who played older sister Kimberly on the show, died of a prescription drug ovedose in 1999.

After 'Diff'rent Strokes' ended, Bridges found his life spiraling out of control as he tried to conceal his inner hurts. He could no longer placates his pain with drugs and alcohol. In 1989, he was arrested on attempted murder charges, for which he was later acquitted. He then slid into drug addiction and dealing, including cocaine, crack and methamphetamines. He became constant fodder for tabloid headlines.

"People thought stardom went to my head,'' he said. "They didn't know this was a 12- year-old kid who was experiencing child abuse and child molestation. I don't think any child could come out alive.''

Now, he hopes to set the record straight. He writes how his father, a drinker who worked as longshoreman, would come home after work and beat him.
"Why-didn't-you-do-your-damn-chores-like-I-asked-you-to-Todd?'' he writes about one incident. "...And then, WHAP, he slapped me on the back of my head. I hated that. Not only being hit, but how unfair it was that he punished me when I hadn't even done anything wrong.''

He goes on to write in graphic detail about how he grappled with is sexuality after his publicist sodomized him in a Cadillac on the way back from an autograph signing shortly after he turned 12. It was Bridges's first sexual encounter, which confused him because it was with a man whom he viewed as a father figure. But it was a classic case of a sexual predator grooming his prey. The publicist, Bridges writes, bought him a $300 bike and told him he could rely on him for his every need. And Bridges did. He became such an integral part of Bridges's career that he was afraid to tell anyone about the molestation out of fear of losing everything, especially since the man said, "Remember, Todd, this our secret, right?''

"I realize now that he was grooming me,'' Bridges said during the interview. "He was tricking me. How could he do that to a kid?''

If the publicist caused ambiguity about Bridges's sexuality, Plato did a lot to clear it up. One day after starting a special school with Coleman and Plato, they were all taking a nap and Bridges awakened to find his pants being unzipped. He looked around the room to see if his publicist was there, but quickly discovered it was Plato. That's when he realized he definitely was heterosexual, he recalled. "I was happy to know, once and for all, that I liked girls,'' he writes. He and Plato fooled around between sets in each others dressing rooms in an arrangement that lasted on-and-off for eight years. He also smoked pot and shared his first drink with Plato.

By the age of 15, he writes, he found three escapes that made him feel better: acting, sex and drugs.

"In 1985, during season five, we did an episode called 'Bicycle Man,' in which a sexual predator stalks Arnold and his friends,'' Bridges writes. "We had already done an anti-drug episode with guest star Nancy Reagan, who had recently launched her famous 'Just Say No' campaign against drugs that was ironic, since I'm sure Dana and I went off together and just said 'Yes' to getting high as soon as we had finished filming the show with her. Of course, the audience didn't know that. They thought we were the most wholesome role models there could be.''

But when Plato got pregnant in 1985, that was not a story line the show thought would be appropriate for her character, so they fired her, Bridges writes. She only appeared on a few episodes after that.

He also addresses tensions between his family and that of Gary Coleman's on the set. In his view, fame went to the Coleman family's head and they became unbearable. Coleman was the biggest star and was widely known for his wildly popular catchphrase, "Whatchu talkin' bout, Willis," which is still known today.

"Soon they [the Colemans] wanted everything their way or else there would be trouble,'' Bridges writes, "but I don't think they ever really asked Gary what he wanted. He always seemed unhappy and exhausted during that time.''

The final episode aired on March 7, 1986 without Bridges. He writes that he believes Coleman and his agent conspired to keep him off the show. But today, as he watches Coleman's life spiral out of control, he is sympathetic.

"I feel bad that he has to go through that stuff. He spent so much time blaming everybody else that he never accepted responsibility for his actions. He's going through so much stress. He has anger issues.''

Today, Bridges feels his life has turned a corner. He has a role on 'The Smoking Gun Presents: World's Dumbest Criminals' on truTV, among other things. He also is a director and producer who travels the U.S. speaking at schools and churches about the dangers of drugs. He has been clean for 17 years, he says. He is married with two children, a girl and a boy.

"My life story can really help a lot of people come through their lives,'' he said during the interview. "It's a book of redemption and about accepting responsibility for your actions so you can move forward in your life.''

Bridges hopes to end the public scrutiny he says he has endured for years with 'Killing Willis.'' In this shocking read about innocence lost by a child who became a willing adult victim, he definitely kills Willis and gives birth to Todd Bridges.

Comment by Anthony Phoenix on July 16, 2013 at 3:27pm
I not her to judge anyone, just read content offered to reading about people, this is just as good as any other stories that I see here!