Tivoli Gets Help From PNP Gunmen To Fight Against Security Forces... 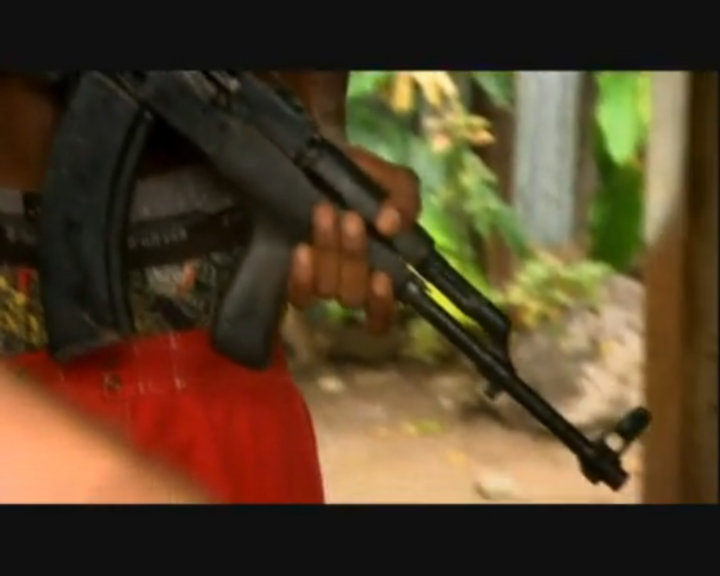 Thugs from several areas aligned to the People’s National Party (PNP) have joined forces with the Jamaica Labour Party (JLP) stronghold of Tivoli Gardens to assist in their fight against the security forces.

THE STAR has learnt that some thugs from Matthews Lane, Rema, Hannah Town and Jones Town are now helping the men from Denham Town and Tivoli, areas that previously were their political enemies.

Reports are that not only are the PNP thugs willing to allow the JLP men passage through their communities if necessary, but they have also taken up arms in preparation of an expected fight against the security forces.

Asked how this was possible, one PNP gangster who was contacted said, “A di president wi a talk bout eno, a dem man dem seh money ova war, so him set certain link weh no normal man couldn’t mek happen.”

He continued, “Mi know yu grow up hear seh Tivoli man and Matthews Lane man a nuh fren but now dem man deh all a come a wi dance and a get special invite … So everybody love di vibes and now dat babylon a pressure bossy dem willing fi help.”

It is also claimed that men from Tivoli Gardens had offered their support and assistance when the now incarcerated Donald ‘Zekes’ Phipps was held by the police so now this is just a way of returning the favour.

It is said that some of the men called into the area have also been paid. They are reported to be offered as much as $100,000 before being distributed with a weapon.

“Money all run pon some a di man dem weh come in and sign in fi dem gun,” another thug claimed.

Efforts to get a comment yesterday from PNP officials were unsuccessful. Calls to some persons went unanswered while others declined to comment.

A senior officer from the Western police said although they have heard of this they are not able to confirm if it is true.

“We know things are not like they once were and men who were once at odds are now linking so it is not surprising. We have heard the talks but can’t say this is how it is right now, it is something we will be looking into,” the senior officer said.

Comment by mr muzik on May 26, 2010 at 1:24am
why would someone call jamaica a evil country, i would never makw a comment like that unless i knew exactly what was going on, not saying that whats going is right but i would never make a judgement like that, prayers go out to the people of jamaica and i honestly hope that this situation does not waste peoples lives, god blesssss........

Comment by Keisha Brown on May 24, 2010 at 1:01pm
I DO BELIEVE WHAT IS GOING ON IN JAMAICA FOR IT WAS BOUND TO HAPPEN.For all those who are Jamaican, others well you wouldn't understand without knowing:
I was four years old when I first heard bullets flying over my head. My family member was murder by soldiers during election time rivalry in Jamaica the year I was born 1978. He, my cousin, who was killed was not a thug or a bad mad, he was a just eating some food in an abandon house (he was 16 going 17). His younger brother who was recruited to fight for PNP was considered a rude boy and became a "bad man" later on in Jamaica and became what is know as a 'Don', here, in the States in NY in the mid 80's before the Fed busted him. This dilema happen is NOT THE PEOPLE FAULT....SO FOR LYDIA COMMENT (JAMAICANS) ARE NOT RESPONSIBLE FOR THE POLITICAL, OR NATURAL DEVASTATION THAT OCCURS due to the POWERS THAT BE...AND KEEP IN MIND POVERTY HAS NO POWER....HOWEVER WE THE PEOPLE HAVE THE VOICE AND WILL BE HEARD. I SYMPATHIZE WITH MY FELLOW JAMAICANS THAT ARE STANDING UP FOR THEIR RIGHTS EVENT THOUGH IT IS REPRESENTED BY THE WRONG MAN IT IS STILL RIGHT FOR THE PEOPLE TO SPEAK...THEY KNOW THE SUFFERING MORE THAN THE POLITICIANS. THEY MAKE AND CAN BREAK THE COUNTRY- the people...IF THEY STAND TOGETHER...SO ALTHOUGH THE WORLD LOOKING IN MAY NOT UNDERSTAND...THIS IS NOT NEW..THIS IS NOT NO DIFFERENT SET OF STRUGGE.IT IS AGAINST OPPRESSION AND SUBJECTATION THAT THEY ARE RALLYING TOGETHER FOR- ALTHOUGH THE MEDIA NEVER PORTRAYS IN THAT WAY....I TOO PRAY IT WILL END HOWEVER I ALSO KNOW FROM BEING BORN JAMAICAN AND AWARE OF THE LAWS HERE AND IN JAMAICA THAT IT WILL NOT END TILL THE PRIME MINISTER AND GOVERNMENT ADMIT THEIR WRONGS AND MAKE A CHANGE.....BLESS ALL THE SOULS THAT HAVE PASSED AND THAT WILL PASS..I FEEL SORRY FOR THE THUGS, POLICE, SOLDIERS AND BY STANDERS THAT WILL LOSE THEIR LIFE. POWER TO THE PEOPLE FOR IN ONE 'LOVE' WE ARE MANY & IT IS BETTER WE STAND FOR SOMETHING INSTEAD OF NOTHING.

Comment by Ac on May 24, 2010 at 1:53am
Jamaica, Jamaica ..Out of many 1 people...... Jamaica my country and always will be my home, stand stroung and stick togerther with this we will over come. God we need you.

Comment by BUG on May 24, 2010 at 1:44am
Listen to this song "Leaders In JA" by BUG http://locksmithrecords.biz/track/leaders-in-ja
God Bless Jamaica!

remind us how to love each other, and give us peace.God please bless Jamaica i wish all that none scent to stop,We are all one people we need to united as one and joined hands and pray for our beautiful country JAMAICA, ONE LOVE