The right to resist and the vindication of Julius Holmes

Julius Holmes was in his Macon, Georgia apartment cooking dinner when Officer Rogers arrived to arrest him.

“I’ll be damned if you will,” Holmes hissed, making a furtive move toward a handgun he had placed on a nearby bed.

Miraculously, Holmes wasn’t gunned down by Officer Rogers, who simply shoved him aside and seized the gun.

“I’ve come for you, and I am going to carry you even if it takes the whole police force,” Rogers growled.

“It probably will,” Holmes defiantly replied. “Go ahead and call them. I’ll die before I’ll be arrested.”

In many situations of this kind, a Mundane who made such a declaration would be killed, and the incident would be treated as a “suicide-by-cop.”Again, Rogers refrained from the use of deadly force.

Not taking his eyes away from the non-compliant suspect, Rogers turned to the woman who shared the house with Holmes — who had filed a complaint against him after an argument the previous day — and directed her to call for backup.

“Give me a summons,” Holmes told Rogers as the officer waited for reinforcements. “I promise to show up in court tomorrow.”

Rogers grimly shook his head and moved to block the exit. About 20 minutes later he was joined by Officer Jobson, and the two grabbed Holmes by his arms to drag him from the house.

Somehow Holmes had procured a knife by the time the officers went hands-on with him. Exercising preternatural self-restraint in dealing with armed abductors, Holmes discarded the weapon, rather than using it. Instead, he shrugged off the policemen and dashed back into the house — where he grabbed a shotgun. Once again, he declined to use lethal force. Instead of opening fire, Holmes took flight.

Summoned by the commotion in their neighborhood, a small crowd had congealed outside of the home.

“Get him! Shoot him!” exclaimed a voice from inside the thickening mob. Concerned that the officers might act on that exhortation, Holmes pivoted in the direction of Officer Jobson, who unloaded four shots in his direction. Two of the bullets fired by the officer wounded Holmes in the extremities, and he was bleeding as he made a desperate dash toward the nearby woods.

At this point, one member of the crowd, a Mr. Wimberly, decided to deputize himself, peeling off from the group in pursuit of Holmes. Jobson barked a warning about the shotgun — just as the weapon itself spoke. Wimberly, who was about 25 feet behind Holmes, fell to the ground, mortally wounded. If he hadn’t failed the Tom Joad Test, Wimberly might have lived a long and rewarding life. 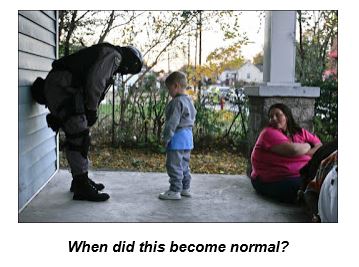 The gunshot wounds Holmes had suffered were not life-threatening, but they slowed him down long enough for the Macon Police to find and arrest him.

Charged with the murder of Mr. Wimberly, Holmes was convicted of voluntary manslaughter and sentenced to 20 years in the Georgia State Prison. That sentence was imposed in July.

By November, the case was before the Georgia Court of Appeals — which overturned the conviction, rul....

“This court fully understands and appreciates the delicate, difficult and sometimes dangerous duties which police officers are called upon to perform, and it will uphold and protect them in the legal discharge of their duties,” explained the opinion by appellate Judge C.J. Hill. “But to approve the verdict in this case would be in our opinion a violation of the sacred right of personal liberty, and a disregard of the right to self-defense, which the law guarantees to every citizen…”

During the trial, Holmes did not testify in his own defense, nor did his attorney present a case of any kind. On the facts as presented by the prosecution, Judge Hill declared, “the arrest or attempted arrest was illegal. There was no warrant. The defendant was not ‘wanted for a state offense, felony or misdemeanor.’ The offense for which he was wanted was a trivial violation of a municipal ordinance. This trivial offense was not committed in the presence of the arresting officers, but the day before a complaint was filed by the [landlady] that the defendant had cursed her” — an act that was described as “disturbing the peace.”

“A policeman under these circumstances cannot be allowed to dispense with a warrant when making or attempting an arrest any more than other officers of the law,” continued the appellate court’s ruling. When the policemen went into the defendant’s house to arrest him without a warrant,they were trespassers in a double sense — trespassing upon the sacred right of personal liberty, and trespassers upon the right of domicile. The defendant had a legal right to resist both trespasses, and to use in resistance as much force as necessary to make that resistance effective.” (Emphasis added.)

As armed intruders, the officers had no right to threaten Holmes with violence or to lay hands on him. “When the officers attempting to make the illegal arrest of the defendant forcibly pulled him from his house and endeavored to handcuff him, they were guilty of an assault and battery. The defendant, thus wrongfully and illegally deprived of his liberty, had the right to regain it, and to use all force necessary for that purpose.”

“The law values human life too highly to give an officer the right to proceed to the extremity of shooting one whom he is attempting to arrest for a violation of a municipal ordinance in order to prevent his escape, even though the offender cannot be taken otherwise,” Judge Hill pointed out. Had Holmes killed one of the officers, the court observed, that would have been an act of justifiable homicide. If Jobson or Rogers had succeeded in fatally shooting Holmes, “such killing would be felonious. Even with a warrant, an officer cannot legally kill one who flees from him to avoid arrest for a misdemeanor.” On the same principle, the killing of the self-deputized Mr. Wimberly was “entirely justifiable.”

“The principles of law which we have announced in the foregoing opinion are not new,” summarized Judge Hill. “They come down to us from the common law. They are well-settled both by the statutes and the decisions of the Supreme Court of this state.” The guilty verdict was “wholly unsupported by any evidence,” and incompatible with the law.

“Every person has the right to resist an illegal arrest, whether attempted by an officer or by a private individual, and, in resistance, may use as much force as necessary for the purpose,” Hill emphasized. This right inheres in every individual, “whatever his color or condition.”

Thus it was that Julius Holmes, a black resident of heavily segregated Georgia who had killed a white man while resisting the efforts of two white police officers to arrest him, was set free on November 10, 1908. 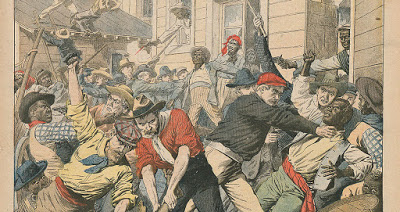 To understand the tenor of the times in which that ruling was handed down, it must be remembered that just two years earlier, Georgia’s capital city had descended into a race riot in which hundreds of homes and businesses were destroyed, middle-class black men and women were dragged from trolley cars and beaten in the streets and several dozen of them were killed. The state militia was deployed to reinforce the police, which did nothing whatsoever to protect the property of people living in black neighborhoods.

Like citizens of every color and description in such circumstances, black Atlanta residents took up arms in their own defense.

The riot began on a Saturday night and the violence abated by Sunday morning. The following Monday, “the riot was revived when state troops were informed that Negroes located in the outer city limits were holding a meeting in which community leaders appealed to Negro citizens to defend themselves,” recalled a 1984 Master’s thesis by historian Barbara A. Tagger. The state troops invaded Brownsville, a section of Atlanta where Clark University and Gammon Theological Seminary were located, and where many black residents had fled during the riot. Not surprisingly, they weren’t willing to surrender their guns when the police, backed by the state militia, demanded them.

After the police opened fire, black citizens shot back. One officer was killed, three others wounded. At least four black citizens were killed as well. Nearly 300 black residents were arrested and charged with conspiracy to murder police officers. Several of them were murdered in ambushes as they were taken to jail. Meanwhile, the Atlanta police, several hundred newly minted Fulton County Sheriff’s deputies and roughly 3,000 troops fanned out across Atlanta and the suburbs, conducting door-to-door gun confiscation.

“In the effort to restore order the military authorities have begun to raid the negro settlements and disarm the negroes,” reported a September 25 New York Times dispatch. “This policy was inaugurated this morning and will continue until every negro in Atlanta and the suburbs is disarmed.”

A few weeks later a Fulton County Grand Jury was convened to investigate the riot and the criminal charges arising from it. That body, composed of white citizens in a resolutely segregated southern city, lambasted the Atlanta Police Department for displaying “cowardice or active sympathy with the rioters,” describing its actions as “a blot on the fair name and face of Atlanta.”

“When innocent persons were being maimed and murdered no measure was too extreme for their protection,” intoned the panel. As the Georgia State Court of Appeals would recognize two years later, that principle applies to the use of righteous lethal force against police officers who unlawfully threaten the physical liberty of individual citizens, irrespective of “color or condition.”

More than a century later, Vernon Riddick, a black police chief, in an address to a community gathering at a c... to submit with docility to whatever demand a police officer makes of them. If they are detained without cause, or their homes invaded without a warrant, they should comply with the officers and then “complain later to the department’s internal affairs office” if they “feel” their rights have been violated.

Chief Riddick’s advice would have caused Julius Holmes to knit his brows in disgusted incredulity — and probably have provoked the same reaction from the arch-segregationist appellate judge who recognized that Holmes had a right to kill a police officer who tried to arrest him without cause.