The real-life Day After Tomorrow: The Gulf Stream is 'dangerously close to tipping point' with the ocean current at its WEAKEST for over 1,000 YEARS which could cause flooding on the US east coast 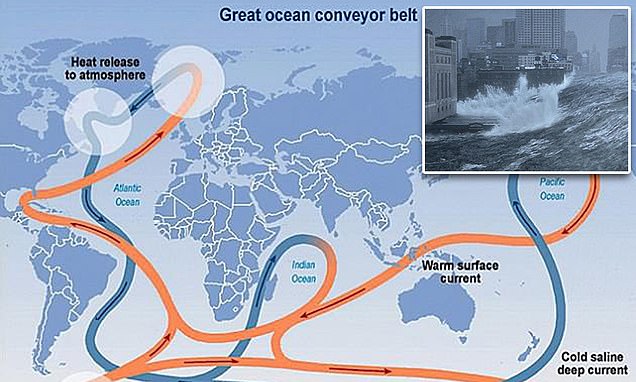 A system of currents in the Atlantic Ocean that acts like a massive conveyor belt redistributing warm water throughout our planet's oceans is the weakest it has been in more than 1,000 years - and human-induced climate change is to blame.

Formally known as the Atlantic Meridional Overturning Circulation (AMOC), it powers the Gulf Stream that brings warm water from the Gulf of Mexico to the northeastern US coast.

Scientists determined that in 2015 it to had slowed by at least 15 percent since 1950, but the latest work paints a picture of how it will develop long term.

Experts warn that by 2100 the AMOC could weaken by as much as 45 percent, bringing humanity dangerously close to a 'tipping point' that would result in devastating weather conditions across the world.

If these predictions become our reality, sea levels will rise along the eastern US coast and Western Europe would experience extreme weather more frequently.

The consequences of the AMOC slowdown could be manifold for people living on both sides of the Atlantic as Levke Caesar explains: 'The northward surface flow of the AMOC leads to a deflection of water masses to the right, away from the US east coast.

'This is due to Earth's rotation that diverts moving objects such as currents to the right in the northern hemisphere and to the left in the southern hemisphere.

'As the current slows down, this effect weakens and more water can pile up at the US east coast, leading to an enhanced sea level rise.'

The AMOC was the plot of the 2004 film 'The Day After Tomorrow,' which depicted the current coming to an abrupt stop and triggered catastrophic storms worldwide.