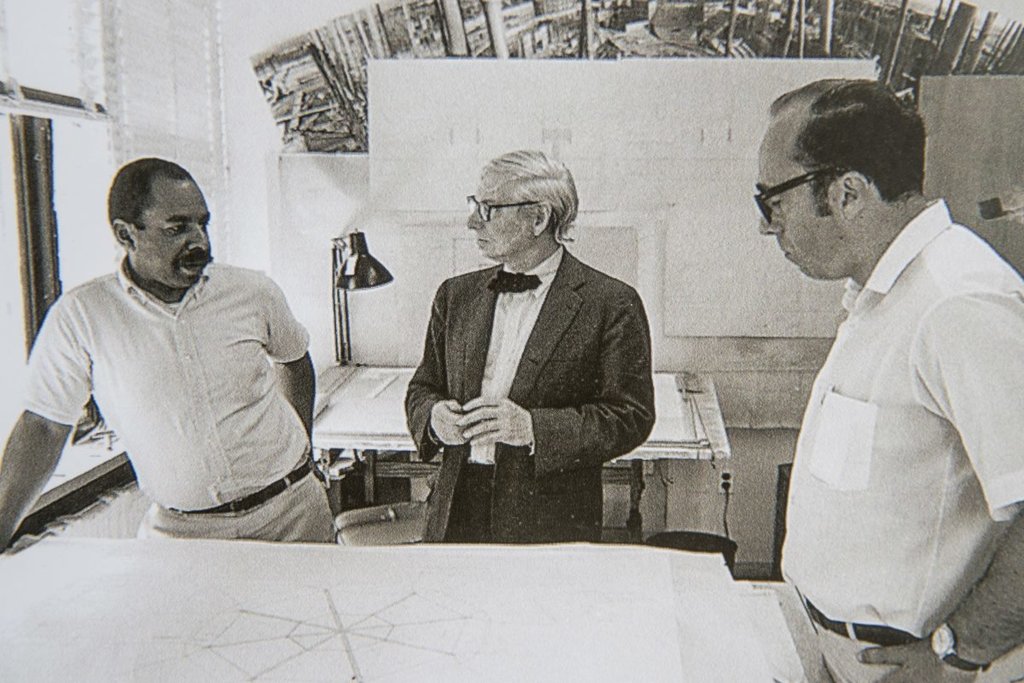 In this 1970 photo taken in Louis Kahn’s Walnut Street office, Kahn (center) talks with Henry Wilcots (left) about the roof structure of the National Assembly building in Dhaka, Bangladesh.

Henry Wilcots distinctly recalls his first encounter with Philadelphia architect Louis Kahn. It was 1963 and he was staying in a hotel in Dhaka, then in Pakistan and now the capital of Bangladesh. Someone tapped on his door, and when he opened it, Wilcots saw a rumpled, silver-haired man holding a flask. He wanted to know whether Wilcots had any gin. He needed it to brush his teeth.

Kahn, who was at the height of his fame, had been hired to create in Dhaka a new second capital for Pakistan. Wilcots was just starting out in architecture, designing military buildings for a small American contractor. He had come to this strange, faraway place because he and his wife wanted an “adventure” before having children. Wilcots also knew that as an African American, getting a job in the United States would not be easy.

Yes, he had some gin. All the American expats brushed their teeth with it to avoid the local water.

Wilcots had been in the region for less than a year, yet he was already an old hand. Because he had brown skin and spoke a little Urdu, people assumed he was from the country. Local officials trusted him. When Kahn began working on the new capital, they asked Wilcots whether he would sit in on the meetings with “the Professor.”

Wilcots demurred. Kahn was a world-renowned architect, he told them. But they insisted.

It would be the decisive moment in Wilcots’ life. By saying yes, he ended up devoting more than 20 years to helping Kahn build the new capital, a massive complex that sprawled across a thousand acres and included a man-made lake. The meetings would cause him to move to Philadelphia, a place that at the time seemed to him far less welcoming to African Americans than Dhaka. When Kahn suffered a fatal heart attackin 1974, after enduring a 27-hour trip from Dhaka to New York, Wilcots would assume the awesome task of finishing a Louis Kahn masterpiece.

Kahn’s star dimmed a bit in the years following his death, but over the last decade interest in his work has exploded. The 2003 release of My Architect, a documentary by his son Nathaniel, unleashed a flood of monographs, biographies, and exhibitions. That scholarship has now culminated in a major retrospective at the Fabric Workshop in Philadelphia.

In his home office surrounded by his Korean War memoribilia, Henry Wilcots, 89, talks about how he came to work for architect Louis Kahn in 1964.

For all that, few people know that Wilcots was responsible for completing Kahn’s biggest and most prestigious project.

“If it hadn’t been for Henry, goodness knows how the project would have been finished following Lou’s death,” marveled Nicholas Gianopulos, the structural engineer who helped Kahn with the parliament building — that is, until Kahn stopped paying his firm, Keast & Hood.

Wilcots’ story is especially remarkable because black architects are almost invisible in the profession, making up less than 2 percent of the total nationally. Over the decades, Philadelphia has nurtured designers such as Julian Abele, Walter Livingston, and Emanuel Kelly, yet today you can count on one hand the number of black architects practicing in the city.

While Wilcots worked under the radar for decades, the Bangladesh complex that he completed is regarded by scholars as one of the greatest designs of the 20th century. It “possesses a monumentality unlike anything to come before it in the history of architecture,” enthused Robert McCarter, a professor at Washington University in St. Louis, in his book on Kahn’s work. In Bangladesh, which became independent of Pakistan in 1971, the complex remains a source of immense national pride and appears on the 1,000 rupee note. Its plaza, which gets a cameo in My Architect, functions as a kind of national town square.

Wilcots, now 89, is retired from architecture, but the Bangladesh government still relies on him to interpret Kahn’s intentions. Just recently, they sent a delegation to review the construction drawings at the University of Pennsylvania Architectural Archives and asked Wilcots to walk them through the details.

During a leisurely afternoon conversation at his Chestnut Hill apartment, Wilcots just shrugged when asked how he felt about the obligation that fell on his shoulders after Kahn’s death. He never intended to take a job with Kahn in the first place. “I had always intended to move back to Des Moines,” where he had grown up in a family of 14 children, he explained. “I’m basically a Midwesterner.”

But life, as it often does, took him on a series of detours. In 1946, he enlisted in the Marines. Because the military was strictly segregated, Wilcots was not allowed to train at Camp Lejeune in North Carolina. Instead, he and other black Marines were sent to a satellite camp at Montford Point. The grueling training regime was identical to the one that white Marines underwent, but Wilcots and his fellow black Marines could not so much as step into nearby Jacksonville without risking their lives.

By the time Wilcots shipped out to Korea in 1950, President Harry S. Truman had ordered an end to segregation in the armed forces. Wilcots found himself on the front lines, hunkered down behind sandbags in a foxhole, as the North Koreans lobbed heavy artillery. He went in as “a grunt” and the only African American in his unit. “When you’re down there in the hole, no one gives you any trouble,” he observed. He ended up as the platoon sergeant.

The year-long ordeal taught him skills that would come in handy in both life and architecture. It also enabled him to study at the University of Colorado on the GI Bill. (In 2012, President Barack Obama acknowledged the contributions of the Montford Point Marines by awarding gold medals to the survivors.)

After Kahn borrowed his gin, they ran into each other frequently in Dhaka, usually in the hotel bar. Kahn would drink aquavit and wax poetic about architecture. It was a heady experience for the young architect. Wilcots addressed him as “Professor” or Mr. Kahn until Kahn turned to him and said, “Everyone calls me Lou.”

As his design for the National Assembly took shape, Kahn pressed Wilcots to join him in Philadelphia. Wilcots was noncommittal. It wasn’t just that he wanted to get back to Des Moines. He had heard that segregation in Philadelphia was almost as bad as in the South. Kahn, a devoted Roosevelt Democrat, didn’t blink.

When his two-year contract in Pakistan was up, Wilcots flew back to the U.S. without stopping in Philadelphia. But while he was in Iowa, Kahn’s telegram arrived: “Welcome when ready,” it said.

The segregation Wilcots feared turned out to be real. The Fair Housing Act had not been passed, and African Americans were restricted to certain neighborhoods. Kahn’s wife, Esther, helped the Wilcots find a house in Germantown, near the Tulpehocken station. While Kahn’s partner, David A. Wisdom, made Wilcots feel welcome in the office, it was harder when he left work after a long day, usually to catch the last train to Germantown.

A drawing that Henry Wilcots made of the National Assembly in Dhaka, Bangladesh, while working on the project with Louis Kahn.

Working for Kahn in those days was not for the faint-hearted. There was only one designer in the office: Kahn. The architect would throw enormous resources at even the tiniest projects, plunging his firm into debt. Payments were always late. Wilcots’ calm demeanor and their experiences in Bangladesh, his fellow architects say, enabled him to develop an easy working relationship with his boss. He became the Kahn whisperer.

Henry Wilcots and Louis Kahn go over architectural plans around 1970.

To keep the project on track, he and Kahn would travel to Dhaka several times a year. Construction was almost entirely by hand, utilizing bamboo scaffolding and steel scavenged from decommissioned ships. Since there were no direct flights then, every trip became a two-day ordeal.

Kahn died returning from one of those inspections. Ironically, Wilcots said, he never got to see the interior of the National Assembly, a building he designed to be both full of light and shaded from the Bangladesh sun.

As Wisdom, Kahn’s partner, tried to hold the firm together, he turned to Wilcots. They formed a new partnership, David Wisdom & Associates. And Wilcots would spend the rest of his career immersed in quiet labor, ensuring that the legacy of another man would continue to shine bright.

Henry Wilcots and Louis Kahn during a layover in Kathmandu on their way home from Dhaka, where they were designing a new capital in what is now Bangladesh.