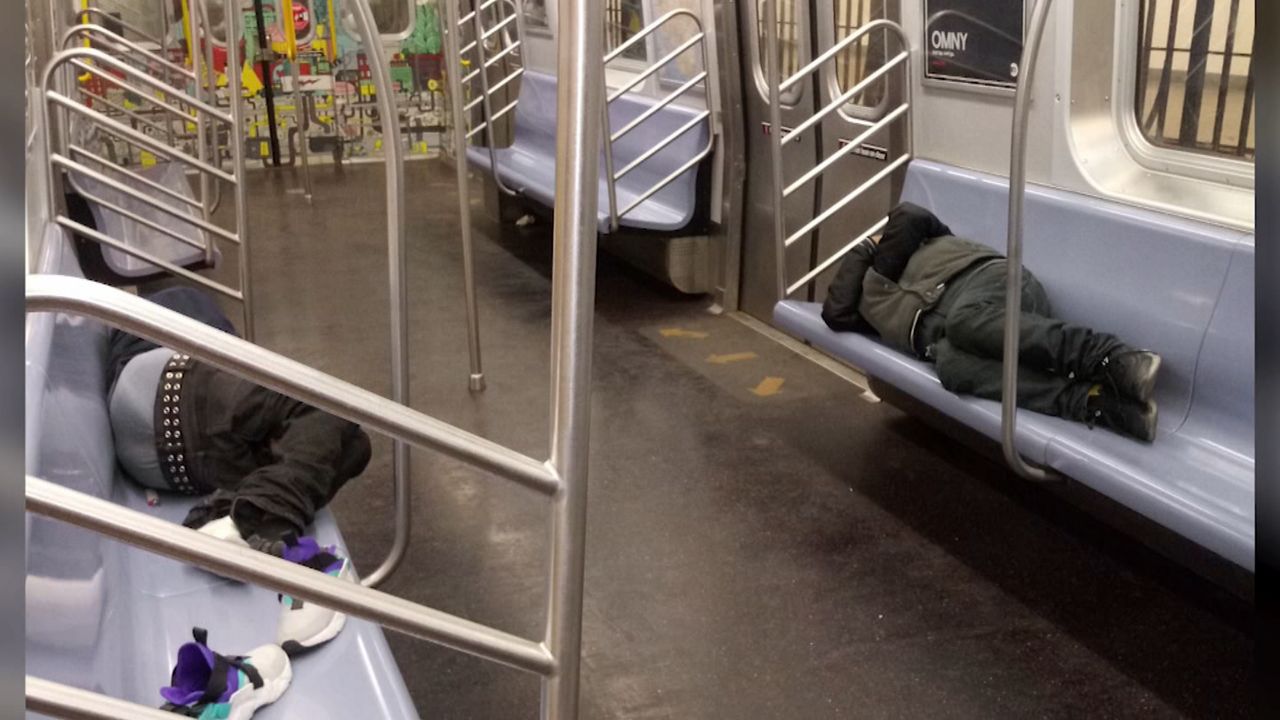 Tensions between City Hall and the MTA over homeless people in the subways have been simmering for years. Now in the middle of the pandemic, they are at a boiling point.

"That is disgusting, what is happening on those subway cars," Gov. Andrew Cuomo said. "It’s disrespectful to the essential workers who need to ride the subway system.”

With the MTA now carrying far fewer riders and running fewer trains because of the coronavirus crisis, the homeless have become a more visible presence underground, upsetting straphangers and subway workers, like train operator Danny Jordan.

"Every day it's just a disaster," Jordan told NY1. "People sleeping on the chairs, garbage everywhere, with no mask. They're using the bathroom on the trains, in between cars."

On Monday night, Mayor Bill de Blasio directed outreach teams to the World Trade Center stop at the end of the E line to get homeless people off trains and into shelters and services. He promised that the effort would take place at a total of 10 terminals.

He's also urging the MTA, which is overseen by the governor, to close those stations overnight, believing it that would make the city's efforts more effective.

"We all know for decades there have been homeless people in the subways going from one end of a line back again, back again, all night long," de Blasio said. "The way to disrupt the pattern is, between midnight and 5 a.m., close those stations. Deep clean those stations, which is good for everyone in this moment.”

The MTA's transit chief, Sarah Feinberg, all but rejected the call to close the terminals. She wants the NYPD and outreach teams to routinely go to end-of-the-line stations.

"I want what they did at one station last night, for them to do in every end of line station by the end of the week," Feinberg said.

The MTA's chief communications officer, Abbey Collins, went further, saying, "The mayor should get out of his car and into the subways so he can see what is really going on and solve the problem of his own making. Our mass transit system is the lifeblood of New York City and it has never been more important.”

Advocates for the homeless, however, say these efforts will be unsuccessful unless there are housing options safer than the subway, and that in the pandemic, homeless people should be sheltered in spare hotel rooms.

Comment by Robert on April 30, 2020 at 1:30pm
Where's the billion dollars that de Blasio gave his wife for mental illness and homelessness?

I love my city....but I'm glad I ain't in it at the moment. My prayers to my fellow NYer's that are dealing with this mess. :-(