The latest Haiti earthquake was more powerful than the devastating quake in 2010. 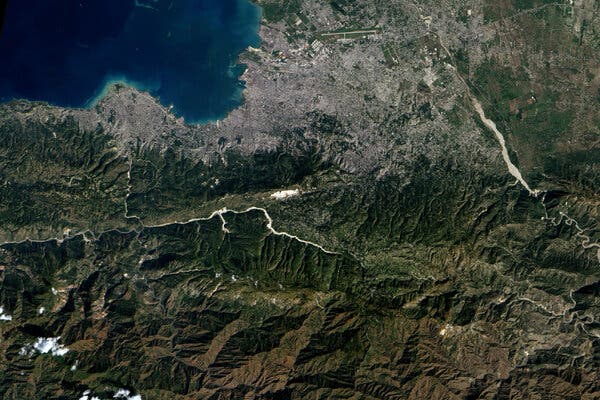 A satellite image showing the Enriquillo-Plantain Garden fault zone in Haiti in 2010.Credit...NASA

The earthquake that struck Haiti on Saturday morning occurred on the same system of faults as the one that devastated the capital, Port-au-Prince, in January 2010. And the previous quake almost certainly made this one more likely to occur.

Both quakes struck on an east-west fault line at the convergence of two tectonic plates, large segments of the Earth’s crust that slowly move in relationship to each other. At this fault line, called the Enriquillo-Plantain Garden fault zone, the Caribbean plate and the North American plate move laterally, or side by side, at a rate of about a quarter of an inch a year.

The 2010 quake was centered about 30 miles west of Port-au-Prince. The quake on Saturday was about 50 miles further west.

Susan E. Hough, a seismologist with the United States Geological Survey who studied the 2010 earthquake, said there was no doubt that it and the one Saturday were linked.

“It’s well established that you do have this domino concept,” she said, where the energy released by one earthquake alters the stress patterns elsewhere along the fault line. “But we don’t have a crystal ball that tells us which domino is going to fall next.”

Dr. Hough said seismologists had been concerned about a region of the fault zone to the east, closer to the 2010 rupture site. “Now we’ve seen the segment to the west rupture,” she said.

She said that the fault ruptured both vertically and laterally. Preliminary analyses suggested that the fault ruptured to the west, which would mean that most of the energy was directed away from Port-au-Prince and toward the more sparsely populated region along the Tiburon peninsula. If that’s the case, then most of the aftershocks that inevitably follow a large earthquake would most likely occur to the west as well.

“To the extent that anything could be good news for Haiti, those are good signs,” Dr. Hough said.

At a magnitude of 7.2, Saturday’s quake released about twice as much energy as the one in 2010, which was a magnitude-7.0 quake. That quake killed some 300,000 people. Jerry Chandler, head of Haiti’s Civil Protection Agency, said Sunday during a news conference that the latest earthquake had killed at least 724 people.

Damage and casualties from quakes depend on many factors besides magnitude. The depth and location of the rupture, the time it occurred and the quality of construction all can play major roles. In the 2010 earthquake, shoddy construction — especially poorly built masonry buildings — was blamed for many of the deaths and injuries.The fault zone extends west to Jamaica, which is also at risk of major earthquakes. In addition to the 2010 quake, the fault zone was most likely the source of four major earthquakes in the 18th and 19th centuries, including ones that leveled Port-au-Prince in 1751 and again in 1770.

Even if you ditch your entertainment, you can still keep current with the latest series and movies by subscribing to one or more video streaming services. 4klive.co Video offers a growing library of quality original content and a decent collection of movies and TV shows to stream. Subscribers also have the option to download content for offline viewing and even watch 4K titles. On top of that, 4klive.co hosts an impressive catalog of TV shows and movies available for rent or purchase. However, it doesn't have as many high-quality shows as the top services and continues to lose third-party content.

Comment by vaughn mitchell on August 17, 2021 at 5:26pm
@Yasmin, what evil have they, Committed, compare to the U.S. the Muslims , and Europeans against black people.

Through all they've gone through, another Earth quake strikes Haiti, Allah God have mercy on them, release them from the cursed, you may be across the ocean, we may speak different language, we may have our differences, but we are family, the blood drawn from Africa and spilled all over the world through out the ocean, May God be with you.

These evil wicked people are reaping what they have sewn.