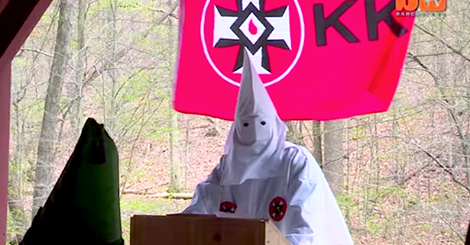 The Ku Klux Klan plans to begin military-style combat training under the direction of military troops returning home from overseas deployments, according to a Barcroft Media report.

The notorious hate group has been attempting to recruit new members – children, in particular – in recent months, and the Loyal White Knights faction has begun preparations for a long-awaited race war.

“We’re going to do something a little different for probably the next couple of years to try to get our men and women ready for the upcoming battle that we’re about to take upon us, and this is something that no Klan has ever done and we’re going to start it,” said one Klan leader during a rally in Parkersburg, West Virginia. “All our boys are finally coming back home from the military, which is good, and we’re getting a lot more military members to join.”

Klan members have dropped leaflets and candy in neighborhoods across the United States, and the group has also used social media in hopes of attracting teenage recruits.

Other young people are recruited by their own parents to join the group.

“I enjoy days like today, because I like being around people, not disgusting people, not drug addicts,” said one hooded boy whose parents brought him and his brother to the Parkersburg rally – which drew about 40 people.

The boy’s mother said she believes black and Hispanic students take drugs from their parents and sell them at her son’s school.

“Their parents are so worried about doing drugs than providing for their own children, that’s what I think,” said the woman, who was wearing full Klan regalia like her husband and two sons.

The group, which has an estimated 6,500 members, has never before trained its members in combat tactics.

“We got police officers in the Klan, we got lawyers, we got doctors – your next-door neighbor could be in the Klan, and you’d never know it,” said James Moore, grand dragon for Virginia.

Klan expert Brian Levin said the biggest threat comes from individual members trying to make a name for themselves, rather than an army affiliated with the hate group.

He said Klan members hope to signal their social relevance by arming themselves and warning of racial unrest.

“The ultimate goal for myself is to have our membership get to the point where we can affect change through the political system,” said one Klan official. “Right now, our numbers aren’t quite good enough.”

But members are confident their message will attract new followers.

Returning troops help KKK build paramilitary force to ‘retake’ US i...
The Ku Klux Klan plans to begin military-style combat training under the...
The Raw Story

You think I find anything offensive with what some of these white folks saying; think again. Some black folks really need to be put into the ground because the very few makes it bad for all of us. Some white folks need to see how it is to be black and targeted, see what it feels like then hopefully they would understand how those blacks felt in the south.

@ Mervin E Yearwood we both know why the klan are recruiting, the question is why are the gangs in the hood are recruiting, whats the purpose of it all, to kill each other some more or to defend their community against hate?

Mr1stroke I read the same report like this one which imply that inner city gangs were also recruting and inlisting in the military for traing.

The report was from police intel.

I also was to tha some of the inner city gangs was formed by vets,

These white folks in America are very evil people and the worst part is that they would hide behind God and do dirt. I know that the devil hated of God is the same level of hatred they have towards us. When you see there true nature it’s disgusting, there the ones started having sex with animals and calls us savages.

Comment by chapelle on June 12, 2014 at 10:37am
So our people are fighting side by side with racist "whites" to protect this country from terrorist but they're planning to do way worse attack more than any terrorist ever known to man on their own soil to American citizens? WHO'S REALLY SCREWED...HER NAME IS AMERICA!!!

@Comment by mr fix  & Tall Island Girl : True they are all about with no hoods, but if it was that bad,how come Obama came to Office ?

@marc anderson: Thank you the kkk will always be losers. There are also blacks who have served with distinction in all Wars that America have been in and even with lesser opportunities, Blacks are more capable to address, protect and stand up against ALL odds.

Comment by marc anderson on June 12, 2014 at 6:40am
You know the kkk want to blame the people who built this country. Indians , blacks ,hispanics Jews and everyone else from across this beautiful planet and doing a good job without them. Kkk will be like the dinosaurs extinct that's why there trying so hard to recruit the minds of the intelligent and it's not working. Sorry to say they already started killing themselves in the homes, schools, markets and the workplace. So we're not the problem just the solution to all good things.

Comment by Bombahdrop on June 12, 2014 at 12:37am
History is repeating itself even worst this time around. Smh